But is it Art? 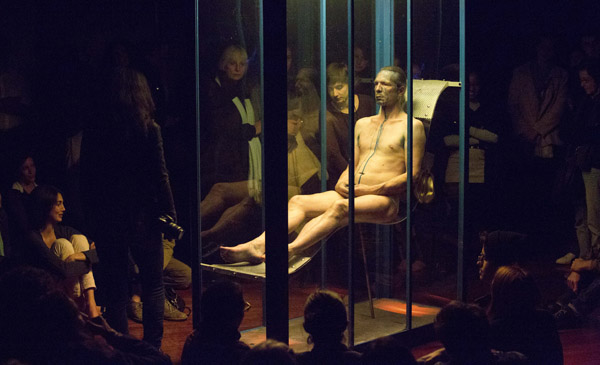 There is an ontological restlessness in conceptual art: a desire to signal as “art” – and thereby accrue to itself the prestige and capital – things which would ordinarily escape the attentions of that civilisational signifier. The means of accomplishing this is a form of discursive manipulation. For example, the mere act of declaring something “art” interpellates the audience into a particular kind of perceptual register. Once simple spaces and actions are reorganised as “artistic”, a very different set of curiosities, of anxieties, of aesthetic potential is produced within the viewer. Bleu Remix enjoins us in such a way. The audience is ushered into a dimly-lighted hall, while a seething soundtrack drenches the atmosphere (white noise; plangent pulsing, like a triggered heartbeat between your ears). Near the centre of the room, Swiss choreographer Yann Marussich is suspended in a glass chamber which glows with fierce, clinical hotness. Nude, aside from his dull white briefs, he spends the duration of its rough hour in a sitting position, slowly starting to sweat blue liquid – the “how” of this biochemical reaction is never explained, and is not the focus of the piece. It begins in single streaks from his eyes, pushes itself into beads from his chest, bursts from his armpits; his perspiring shoulder blades push up against his chamber, inking a perverse image, like a Rorschach test of internal waste, against the glass.

Art audiences are well inducted into the respectful procedures of artistic viewership. Marussich has made an intimate spectacle of himself, and while they first sit in a sombre cross-legged mass, the audience soon grows agitated, bored, interested – or some alchemical mix thereof – and begins to drift around him: pointing, whispering, orbiting to glimpse his monkish anatomy from each angle, standing on toes or crouching to see every part of this process. After an hour, the minimal and tense ambience of the soundtrack reaches a crescendo, Marussich has dendritic trails of blue sweat spreading from his temples, the lights in the chamber cut out, and everyone shambles outside to cross interpretations, and then back inside to swig wine and eat curled beetroot crisps. Alex Dodd delivers this evening’s presentation – by instruction it is one of “dissociated text fragments” – but before some minimal impressions, a few remarks on method.

I speak absent of the dense lexicon of art theory, but propose for the purposes of my remarks here, a simple, functional and revisable opposition between an esoteric art and a properly radical kind of art. The ambition of the latter is to exhume all the historically repressed elements of our everyday existence, which either through ideology or more deliberate occlusions, are excised from the experience of the quotidian. Such things include violence and exploitation – structural, symbolic and subjective. It would be radical, for example, for an artwork to demystify its own implications in a decadent, liberal bourgeois culture which has produced an exclusivist art-realm presided over in shadowy ways by power and commerce. It would be radical too, to bring the representation of the exploited masses of our countries and worlds into middle-class proximity, forcing an engagement with things that the simulacral, fetishistic political and discursive power-systems of our age are explicitly designed to make invisible. Esoteric art, on the other hand, aims to produce private, existential effects within its spectator. It is mystifying, even mystical; it resists and proliferates meaning through its non-committal relationship to politics. It does not make its connection and implication within structural dynamics manifest – rather it is endlessly ambiguous, endlessly interpretable, endlessly co-optable. There is room, of course, for either of these categories to drip into another, but I hope I’ve made my point at least understandably clear. 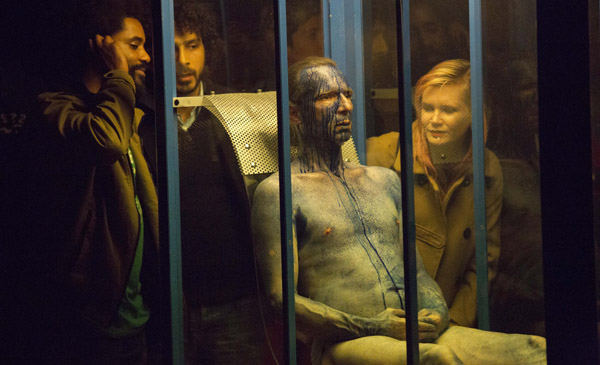 The dread power of such an art is that its enthusiasts can claim on its behalf the power of real radicalism; yet, its effects are private and existential, and the cord which should connect it to the vastness of the material world is imaginary. Liberal bourgeois art has performed a terrible sleight-of-hand: it has retreated from reality at the same time it has appeared to radicalise its provincial, exclusivist, capitalist agenda. It speaks the name of radical things while mystifying what the hell radicalism actually means anymore.

I must admit of a disorientation at Alex Dodd’s presentation, which proceeds through memory and a trigger of associations. She encounters Bleu Remix seemingly as a knot in performance art, an intertext which recalls Mahatma Gandhi, Taksim Square, a woman in a mini-skirt raped at a taxi-rank in 2008, the cinema of Derek Jarman, “stillness as an act of political resistance” – a mesh of references which don’t have any umbilical link with Marussich’s performance per se. The point of all this is a vaster analysis on the “transformative” power of performance art, as she has prepared the speech in advance, researched before experiencing. She moves from anecdote – on two occasions invoking episodes of Apartheid – to theorising, but my concern all the while is that by placing such politically-charged images proximal to Bleu Remix, she is imbuing the performance with a revolutionary energy that doesn’t quite emit from the performance itself; an energy by association. My girlfriend had in fact scribbled satiric interpretations in the margins of my notebook during the performance and I reproduce them here: this is about the environment; this is about existentialism; this is Freudian (almost comically, the pamphlet which accompanies the piece speaks of “secret passages from the unconscious, straight to the conscious”). Marussich’s piece is unclosed and undesignated, but we should be cautious of which of the pullulating possibilities we choose to lock onto, mindful of its consequences on continued artistic practice.

Dodd’s appraisal of the work is enthusiastic. She speaks of “the bewitching intensity of his tone” and “the courage of the artist’s deep, personal implicated-ness in the moment.” She suggests that “if we make ourselves receptive [to Bleu Remix], open ourselves up to its potential to affect us, our bodies might respond in a language of their own […] our pulse might speed up and the breath might quicken.” This is, of course, true – Bleu Remix manipulates tension and anticipation masterfully, it has the effect of a kind of slowing-down, the production of a reverence. But I wish to add another intertext to Dodd’s political bouquet, and this one slyly returns to my opening remarks on organising discourses. This intertext is British mentalist and pop-culture sovereign personality, Derren Brown. Brown is, decisively, an entertainer and not an artist – but this is only because the critical apparatus which designates this distinction, chooses him to fall on the less-cherished side of that boundary. Consider the similarities: Brown also might perform in conditions of dim-lighting, also does not reveal his magician’s secrets, also aims to produce aesthetic and sensory effects within his audience, also uses visceral music to order his spectator’s experience, has also produced spectacles of the body, has also had his audience react and participate in his performances in curious, unexpected and non-repeatable ways, and also gestures to themes beyond his explicit act. There are ways in which Marussich’s performance is coeval with this: near-naked man suspended in glass chamber for an hour, mysteriously and unnaturally sweating the colour blue. The body is, of course, political, but through which channels of meaning-making is it declared politicised in the one instance, and depoliticised in the other?

A final observation, before I conclude these tentative provocations. Dodd, by way of anecdote, tells us her father’s reaction when she summed-up Bleu Remix to him: “sounds awful.” To this she rejoins, “I don’t think so”, and then, it must be said, moralistically, she declares, “I think corrective rape is awful […] I think the proliferation of warfare is awful; I think the fact humankind is actively contributing to an era of unprecedented mass extinction of multiple species is awful.” This is intriguing, as Dodd limits the critical vocabulary, seeming to auto-innoculate all art from its critics, gesturing towards actual socio-political and apocalyptic atrocity as the only measures by which the category “awful” makes sense. This is perhaps the symptom de rigueur among an occlusive kind of intellectualism, which misrecognises the connections between art and atrocity. Perhaps we might find quite legitimately awful the moments at which art claims to speak in a utopian mode, while only ciphering the class-interests of a decadent and elite few. Liberal bourgeois art is implicated in atrocity, with its commerce and exclusivity and funding-grants and subject-matter and pretentiousness and closed-circuit of participators and legitimating powers of prestige and interest – it exists as a realm enfolded inside a vaster political system, and the task of radical critics might be something like the task of uncovering those buried sigils of its complicity. To presume an innocence of art, an innocence in aesthetics and representation, to readily radicalise esoteria, strikes me as committing a kind of messianism in art, of a radical energy – an energy which seeks to transform the very conditions which produce social, economic and political relations – which is either “not yet” or “not there”.

Obviously, these accusations – being as large-scale as they are – are not intended to all fall decisively on Dodd’s presentation, but her remark and the ways in which she places Bleu Remix within politics, certainly spark this open-ended inquiry. From my vantage, Bleu Remix was an ambiguous performance – at times solemn, introspective, tense and interesting, at others, boring, indulgent, pretentious – of a man who took Eiffel 65’s mantra a little too seriously. Its claims to the political should be, in a generous reading, oblique. Marussich’s own silence on his piece – he favours one-word answers like “relaxed” and “nothing” – simply open up the endlessness of this untameable artwork. Much of what he says is, this evening, lost in a tangle of reverb. Nevertheless, I continue to proceed into these conceptual pieces with the same suspicion and caution as the first time I met their type.