An Evening with Teju Cole and Yewande Omotoso 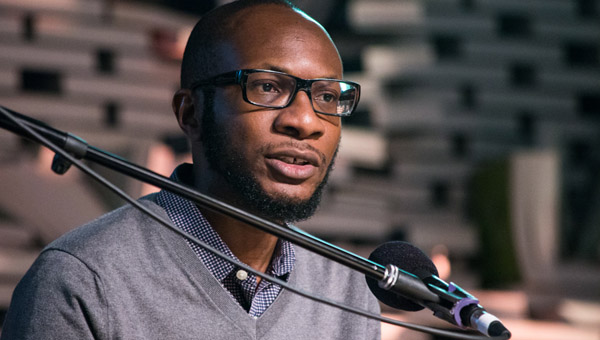 9 September 2013, UCT (in conjunction with the programme in Creative Writing)

Teju Cole speaks of his latest visit to South Africa as one accompanied by the sense of “arriving in the aftermath of some great disaster”. This is among his many imaginative compulsions, to see the flotsam of history born aloft in the most (seemingly) insignificant details of the everyday. It occludes its presence in the present and exists everywhere: even the territories of upper campus, the ritual accoutrements of life, the disorganised rhythms of the ordinary; nothing escapes being inflicted upon by apartheid. To him, the literary impulse is one to “estrange the everyday” or “testify to what everyone considers obvious and is not worth writing down”, revealing our “vanished histories”, and bursting the horizons with which we understand our world. Over one and a half hours, he converses with fellow Nigerian writer, Yewande Omotoso, his evening’s capable inquisitor – the result is seductive, interrogative, demystifying.

Omotoso opens with a question on seductiveness, regarding the especial “seductions” of Cole’s latest novel, Open City (2011), asking him about its hypnotic qualities, its rhythms and pacing. Answering to “the technique and flow” of the novel, Cole says he aims for a “controlled random-ness”, and a kind of “drift”. “The process of writing”, he says, “is about balancing the need for a feel of drift, and to make it quietly structured, and maybe even ominous.” As the seminar is hosted as part of the Programme in Creative Writing at UCT, the general lurch of the questioning is toward the trials and complexities of writing practice, but Cole’s answers always freight in a consciousness of the political. Open City began in the debris of 9/11, five years into “the aftermath of a trauma”, with Cole wanting to “address the feeling of fear that you might get […] particularly if you were there as a witness”. More than any other writer I’ve seen interviewed, Cole exalts in the infinite implicated-ness of all things, understanding that cities are deep composites of which his task is both archaeological and interpretative: to discover the buried and repressed sediment, and to understand human life unfurling itself within this fraught present. “How do you survive history itself?” he asks. “The mood and patterning and rhythm of the book came from that need.”

“How much are you happy to discover?” asks Omotoso, invoking the dynamics of spontaneity and deliberation in his work, and especially a forthcoming text on Lagos. As a writer, he seems to be trying to disentangle himself from the utter immersions of the everyday – casual episodes on the subway in New York, for example, later filter organically into his texts to satisfy certain symbolic needs, the narrative slowly architecting itself around these anxieties/desires. “Events are sought in that way, and you build them up,” he says. He marks writing as a “hunting-gathering” pursuit: “If I don’t do that gathering, I will never have the required density on a given page.”

The conversation turns to the question of doubts (about writing and doubt more generally). “Doubt is a thing I engage very seriously,” he says, speaking of “uncertainty” and “the role that not being sure plays in our ways of thinking”. Indeed, speaking of the Twitter account which helps keep afloat his enormous popularity and public presence – his tweets were recently described by Henrietta Rose-Innes as possessing a “novelistic intensity” – he says that “I have to risk foolishness”. Doubt is something that requires a careful negotiation, both productive of the best kinds of alienated insights, but also a taming phenomenon that, allied too closely, threatens to shut down all possibilities of writing in a tremor of self-consciousness.

Speaking of his forthcoming work, in some sense a “non-fiction” work as far as it’s possible to hold onto these categories of purity, Cole says that “there is no fiction or non-fiction. There is a desire to narrate experience.” His book, based on memories, interviews, excursions within the capital, is about a city that, to him, is “under-represented” in the global imagination, victimised by cliché, reduced to a texture-less parody of corruption incarnate. He says he is happy for people to dislike Lagos, but that they must do so for the right reasons, for “reasons that come out of knowledge”. “You need to understand the struggle that makes it what it is” he says, invoking a day-in-the-life of a Nigerian citizen, considering how its dialogues, and rituals, and love-making, and human flesh and bone are obliterated in the international media and literature, by the occluding image of a “decontextualised dystopia”. Rather, he composes a Lagos of all its elements. He says of Lagos, “it is a city struggling to make sense of itself”.

The evening winds down with some interesting comments, including an eloquent and powerful remark by the first gentleman, who, on the issue of corruption and the correspondences between Nigeria and South Africa in this regard, points out that current nostalgias about the administrative efficiencies of the apartheid government fail to register that the grandest corruption of all – the withholding of so many resources and dignities from so many subjects as an institutional practice – is the one that seems to be so invisible in discourses about contemporary governmental venality. It’s an important reminder to not “narrow our window of observation”, as he says, and a remark that I’m sure Teju Cole shares an intimacy with. He is an utterly charismatic, completely engaging speaker and I’m personally delighted in the mere anticipation of actually getting hold of and reading Open City.