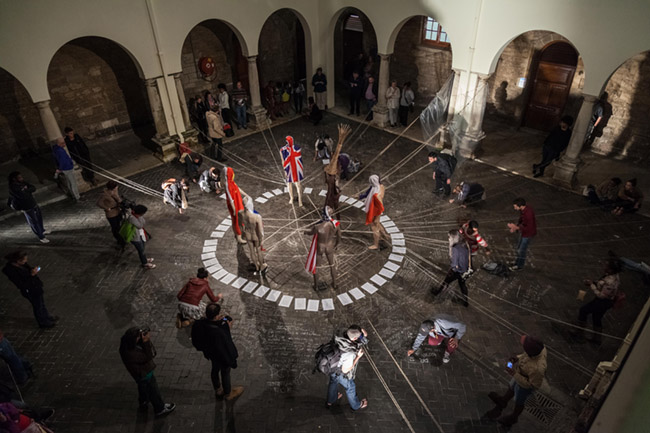 First up was do it, an ongoing "exhibition in progress" that started in Paris in 1993 as a conversation between curator Hans Ulrich Obrist and artists Christian Boltanski and Bertrand Lavier. The idea behind it was to start an exhibition that could constantly generate new versions of itself. The premise is simple: Artists are asked to propose works based on written "scores" or instructions that can be openly interpreted each time they are presented. The project has since been translated into nine different languages, with hundreds of artists invited to submit instructions. No two interpretations have ever been the same, not even when an interpretation was repeated.

For the GIPCA Live Art Festival, photographer Robert Hamblin and transgender sex worker Ayanda Denge have been invited to interpret Brazilian artist Lygia Pape’s Good Blood – a piece that considers the meaning of blood within the context of race, class and privilege. Facing each other and racing to dissolve red-coloured blocks of ice between their hands – the winner is deemed to have the “best blood” – we bear witness to an unspoken conversation between them. Simultaneously, audio clips in which they communicate the realities of their lives are also played – providing a broader context to the undeniable bond they appear to share. It is a heartfelt fellowship born out of a shared struggle: one of love and compassion towards those most vulnerable to HIV/Aids.

A pair of silver curtains is slowly drawn halfway at the start of Shiver. “It always begins the same,” an eerie voice coming from the darkness beyond it greets us. “An experience shared by one. And all. Look in front of you. There it is. Look at it.” The theatre lights go out. We start to get nervous. Something flickers, followed by an old film score from the 1940s slowly drifting onto stage. Similar to the smoke curling out of a cigar, the four figures we then see materialising never quite shape into, or retain specific forms. There’s a glimpse of a trench coat. A bow on the side of a woman’s dress. A fedora.

After previously deconstructing the relationships between movement (Playback), sound (Amauros) and image (Small Explosion with Glass, Repeat Echo), Swiss choreographer Nicole Seiler this time around is interested in questioning reality itself. Through mixing a moody atmosphere/evocative sound with an elaborately designed video system projecting light and computer animation onto the bodies of her dancers, Shiver plays out like a noir detective horror film screened through a vintage projector. It is a lingering piece that evokes nostalgia, suspense and fear. Performed with athleticism and great technical skill by performers Claire Dessimoz, Dominique Godderis-Chouzenoux, Krassen Krastev and Pauline Wassermann, the result is an experience that challenges the very safety traditionally associated with sitting in a theatre’s auditorium. 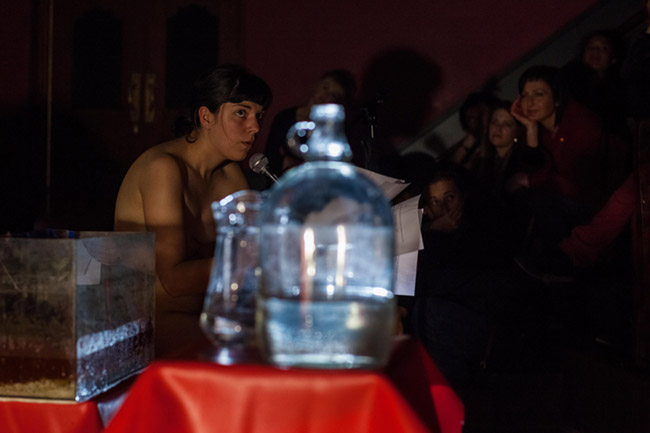 Making our way into the Anatomy Lecture Theatre in the Old Medical School Building on Hiddingh campus next, we find a stark naked Rosa Rogers Postlethwaite greeting us at the entrance. So natural is her demeanour and so pedestrian is the setting that one is immediately reminded of those dreams where you arrive at work or school only to realise you forgot to put your clothes on. Our suspicions are further confirmed when Postlethwaite begins her “lecture” by describing how, whenever she has trouble sleeping, she takes to walking around Cape Town at night. Could we somehow have made our way into one of her insomnia-fueled hallucinations?

In what feels very much like a lucid dream, this intrepid young artist then takes a sleeping tablet before rushing to deliver the rest of her increasingly bizarre presentation before the pill takes effect. She makes jelly in a fish tank. She strikes a pose on several bags of ice similar to a dead fish on display at Pick ‘n Pay. We are shown slideshows of previous faculty heads at the medical department. Intermittent sound clips relating to depression are heard. Described in the programme notes as a piece “about a place in which bodies map and are mapped,” The Anatomy Lecture Theatre finally leaves Postlethwaite asleep on a chair while we leave the theatre feeling as if we’ve been given an insight into something intangible, yet nonetheless profound.

Standing at the center of a large courtyard as part of Eleegba (Oginrinringinrin III)are five shop mannequins. Draped around their respective heads are the national flags of China, Russia, England, France and the United States of America. The dummies are facing each other in a circle and are tied together via a spider web of rope spanning the entire square. Standing guard over proceedings is Nigerian performance artist, Jelili Atiku. We are presented with pieces of paper and instructed to write their contents down in chalk on the cobblestones – hunching, crawling and climbing our way through the rope barriers during the process.

No two pieces of paper contain the same information, but somehow they all relate to nuclear weapons, capitalism and global politics. Adopting the Egungun technique – a Yoruba cultural expression focusing on the radical presence of body in space with intervention, transformation, reconstruction, ritual, ontology, spatial awareness and negotiation – this piece sees Atiku become an animated canvass against which to consider the “potentiality of the human body as it becomes a symbolic and metaphor for critical issues of human values and security.” Visually impressive, immersive and somber, Eleegba (Oginrinringinrin III) is a simple meditation on the rapidly changing times we find ourselves in as global society. 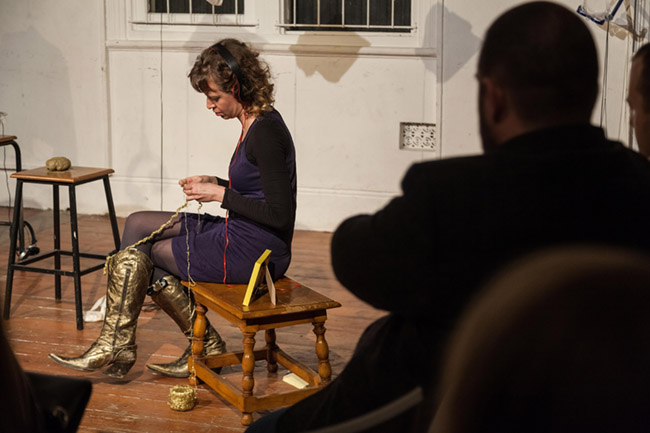 During the final piece of the evening, Resound, Alex Halligey invites the audience to undertake a journey with her through the ephemerality of the individual. Through interacting with a series of found/gifted objects – among them a pair of golden boots, swimming goggles, playing cards, a disco jacket and a mysterious wooden box – she reveals more about their owners by playing recordings of their voices. Through this interplay of live and recorded voices, Halligey empathically explores the fleetingness of human sound as well as the possibilities for its “on-going resonance through reverberating, recording, replaying, retelling and re-imagining.”

·To read more about the rest of the GIPCA Live Art programme, or to see pictures taken during performances, see www.gipca.uct.ac.za or follow Gordon Institute of Performing and Creative Arts (GIPCA) on Facebook.