The ‘transformative potential’ of poetry: a bourgeois ideal? There is a primordial question here, which exists before all others: what is poetry? It’s an inquiry deliberately evaded by our four discussants and understandably so, given the vastness of this ontological field. However, it is worth at least bearing in mind that any conversation about poetry is built as an augmentation, a superstructural expression of a given architectural base. How we distinguish poetry from its fraternal and filial forms and ambitions determines the conversations that take place, and not making that distinction clear produces strange ambiguities. In a very limiting sense, poetry could be restricted to its textual form – with those recognisable patterns and rhythms of expression. It could also, however, be extended to superbly encompass almost all human endeavour which aims to transmute the dead materials of our existence into meaningful things. Most likely, an arbitrary cut-off point will have to be struck if we are to speak at all sensibly, without converging too deeply the amorphous domains of human culture. 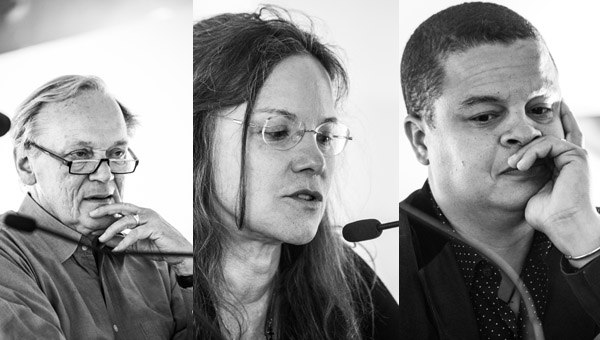 Now! a moment to breathe and dispense with all this awkward abstraction before we irresistibly plunge into its thickness again. This afternoon, Kole Omotoso chairs a seductively-named seminar: The World as Decayed Metaphor. His participants are a cosmopolitan pick: Carolyn Forché (USA), Joachim Sartorius (Germany) and Alfred Schaffer (Holland). The audience on the other hand is predictably, even dully of the porcelain composition – I mark five or six “blacks”, and I’m only able to get that far by using Biko’s embracing and inclusive sense of the term. Oh wait, pardon moi, that is “five or six” if we exclude the fleet of waiting staff, seen ghosting along the edges and alleys of this exquisitely manicured wine estate, with its colonial manor houses and “Moyo” restaurant, where African culture is agglomerated into a tacky carnival for tourists and their mighty currency. I am, of course, being deliberately provocative, but there is a point. Towards the end of the seminar, having ranged over an immense (and in some ways, evasive) discussion on the dialectics of the poetic and the social (does poetry shape the world?), Carolyn speaks of how the audience, comprised of people from so many places and with so many occupations, have come together to form a “cohesive community” around poetry. Remarks like this, in contexts like this, just urge me toward an unquenchable desire for evisceration. The attempt to make it seem as though this audience is so cosmopolitan is a deliberate attempt to occlude the race and class dynamics which actually structure this performance, the real remnants of how “untransformed” South Africa is, regardless of poetic intervention. It occludes further, the fact that all this talk of the “transformative potential” of poetry – one of the centrifugal ideas of the talk – might be limited to the realm of the bourgeois. Perhaps poetry transforms the middle-class in some private and existential way (perhaps), but then let’s be bold enough to confess that whole sectors of society are left untouched in their starving masses by this seminar and this poetry. And if “some” poetry has transformed the social domain, that does not pardon the practice in toto from these charges. The provocation is complete, and I should hastily add that all literary discussions which avoid the question of class end up theorising themselves through their own dynamic of liberal complicity. At any rate, the above remarks allow me to segue into Omotoso’s, when he organises the discussion by suggesting that poetry could be “a way of hiding from the reality of the world; a means of getting into the reality of the world; or a means of deflecting the effects of the world.” It is this unresolved ambivalence, an ambivalence which cannot be met with a final resolution, which permeates the responses. Sartorius speaks first and suggests that poetry “preserves something human which might otherwise be lost.” He says understandably, that whether or not poetry affects the world depends on the location from which the poetry is written. German poets, for example, have become “laconic” and “cynical” after the harrows of the 20th century. A Colombian seminar, by contrast, recently asked the question “can poetry heal the wounds of the city?” Such a question, Sartorius says, would be unthinkable to a German.

Carolyn’s opening remarks are as follows: “Poets remind us of the absent ones, they speak to the future and to generations to come and some of their work may only be intelligible to those generations. A poem is sometimes as quiet as the wings of a monarch butterfly, caught in a cloud on its way to Michoacán…” She uses the “butterfly effect” to suggest how small and seemingly un-implicated things can have tumultuous and faraway consequences. “Major events,” she says, “may be caused by miniscule events that are usually outside the scope of any measurements. I would like to begin by imagining that it’s not possible to know how poetry affects the world, and that it affects the world in myriad ways, ways which are ephemeral and luminous.” This is a remarkable gesture of fatalism, even anti-intellectualism. It is true that the totality of the world is produced through a chaotic collision of fragments sprawled across its geographic expanse. But to her sentiment we must rejoin with Ranajit Guha: “There is no room for spontaneity in history. This is precisely where they err who fail to recognize the trace of consciousness in the apparently unstructured movements of the masses”. It has further not stopped Moretti and Jameson (and countless others) from determining these patterns which take place among the chaos. It is exactly these patterns which allow us to chart and assess literary impact, and it is exactly the same knowledge of the structure by which these things operate, which may enable us to ask radical questions about poetry’s transformative potential in a divisive country like South Africa, radical questions which this seminar was designed to ask, but which remain radically evaded.

As ever at these kinds of seminars, an elision and flattening happens at the analytic level, much to the dismay of those of us who think that idealism is the final form of banality; the point at which an incandescent hope drowns out reality in its glare. It is impossible to remain unscorched by Carolyn’s condescending remarks, mid-way through the talk: “I want to congratulate you! Look at what you’ve done!” These, directed at the social changes since Apartheid. Thank you, Carolyn for your moist congratulation. She tells us that “poets are bridges, between periods of time, places and cultures.” Later on, this metaphor of the bridge is picked up by Schaffer, who disastrously proclaims that it isn’t important how many people walk across the bridge: “If one person walks across, that’s enough. Poetry is about beauty; it’s not for everyone to appreciate. The less the better or the bridge might break.” This might be precisely the problem with an art-form that, in this incarnation at least, seems exclusivist, bourgeois, alienating. The panelists all have fine insights about what poetry is, but as to the question of what poetry does– this is the question they can’t really answer. This is the question that requires more history, a greater awareness of the conditions of practice and a higher level of critical self-reflexivity from the participators.

There are some healthy interjections from the crowd at question-time. One suggests that the panelists might be trafficking in too idealistic an account of poetry, and that Schaffer’s remarks are the sort of idea that has contributed to an intellectual atrophy in European poetry. Another points out that poetry is often in the employ of political propaganda, and hence its effects might be all too pernicious rather than transformative. The seminar concludes on a note of ambivalence, as it necessarily must, the question of how poetry shapes the world remains deferred.

I have perhaps been quite harsh in my appraisals here. The account above is impressionistic and selective, but my general argument remains. Much like the contemporary crime-fiction argument, where a mammoth signifier is being deployed in arguments about sociopolitical merits, “poetry” is too vast a term, and perhaps accounts which focus on the dialectics of specific bodies of poetry might yield more focused results. It is obvious that poetry impacts on the world – everything does – the question is how and whether there is “real” transformation to be found in poetry. All this talk about how poetry “heals” and “replenishes” and “reinvigorates” and so forth seems a little misplaced. I have been healed, replenished and reinvigorated variously by plasters, sex, drugs, subaltern studies essays, chess, friendships, cinema and whatever else in no particular order. If the “poetic” is the existential conduit through which these things come to have meaning, and thereby exert transformative powers, “poetry” itself has a far stronger case to make about why it’s so special – but this requires us to return to that fugitive ontological question I opened with. To be truly radical about the question of poetry and society, I think, requires a stronger cynicism about poetry: not the implicit assumption that poetry is in fact healing – which is the party line, the status quo – at the expense of all the other cultural engagements which work as synonyms for these processes. We need more reality and less metaphor.