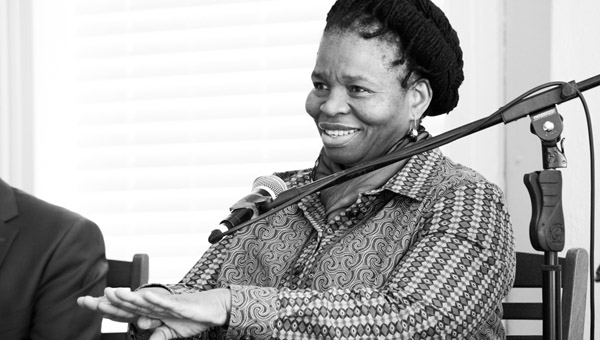 Queer Africa is a new anthology of creative short fiction, which – in the phrase of this afternoon’s host Derek Higginbotham – “represents the diversity of queer lives on the continent”. Together with his “co-conspirator” Zethu Matebeni, they stage a dialogue with the collection’s co-editor, Khozi Xaba. Matebeni announces that her line of questioning will be “celebratory”, without obscuring the “critical and challenging” questions the text gives voice to. Such questions – admirably pursued by both Higginbotham and Matebeni – circulate around the dynamics of queer representation and their fraught interplay within these short stories. Regrettably, although the talk is relaxed and informative, one has the suspicion that their interlocutor evades the most enriching, substantive questions toward which the duo urge the conversation, focusing instead on the practice of publication and its related domains (selection, editorship etc.) The result is thus, perhaps, slightly more “celebratory” than “critical”.

Matebeni begins by noting a proliferation of queer writing in Africa and asks, “Why queer now?” Xaba replies that, “in our societies, we go through waves of social and political consciousness”. She says that past struggles inform the present – although, of course, the present often splits from this heritage in radical and intriguing ways. She also cites the South African constitution – as document realising progressive social struggles – and notes, that “people are beginning to find South Africa a place of refuge of different kinds”. For her, there are a great many influences at play in the present valence of “queerness” for public discourse: it is, in other words, a “fertile period”.

Matebeni asks Xaba, “What does queer mean?” Her response is that “being queer is a political term”. She invokes the idea of “blackness”, and the continuity between blackness and queerness, saying both have been historically positioned – in the South African context – “outside apartheid”, and suggests a unity of experience here: cast to the marginalia of society as an “other” to an established centre, or as some form of deviant excess from a white, heterosexual normality. “Our understanding of sexuality keeps enlarging,” she says, noting the inclusive incorporation of contemporary gay cultures (homosexual, bisexual, transgender, cisgender, intersexed). She marks “queer” as a “political category that comes from social movements”, which leaves a great deal to the speculation of the viewer; namely, the texture and specificity of this category and its co-existence and tension with other political signifiers.

In African Intimacies – which Matebeni quotes from – Neville Hoad writes of the homophonic proximity of the words “queer” and “amakwerekwere” – a derogatory term for “foreigner”. He suggests a thematic correspondence between the two in this, admittedly, imaginative but productive stretch. Matebeni suggests that “the queer is foreign, and the foreign is queer”. This leads to the idea of “queerness” representing a disturbance in the order of things, a defamiliarisation of the kinds of bodies and performances that are legitimated by our discourses. In response, Xaba gives an origin of the term “kwerekwere”, which she first encountered in isiZulu, a term from an “onomatopoeic language” which represents the garbled tongue of foreign speech, bursting out in a babel of repetitious syllables. She, nevertheless, acknowledges the value of this creative reading.

Higginbotham asks about what the anthology thematises among its variety of stories, pointing to an emphasis on the military experience, saying “military conflict is queered in the text”. He also argues that many stories contain a desire to “look back to the past”, hoping, perhaps, to explore the presence of history, nostalgia and memory in the construction of queer identities. Xaba says that the editing process aimed for a balance, and she amusedly recalls when she first noticed that “there are too many stories about white people in the army” [in the text]. She mentions four categories of submissions: the unpublishable, the not-fiction (memoir, autobiography, personal essays), the “approaching literature”, and the more competent corpus from which the final selections were made.

This prompts Matebeni to wonder, “What was left behind in terms of content?” She considers the lacunae and disparities of representation with regard to the urban/rural divide, protagonal genders, and the focus on South Africa at the expense of other parts of the continent – the question, perhaps, is aimed at troubling the authoritative-ness of a volume which announces itself as “Queer Africa”. Later, she notes the “relationship between the queer and the erotic” – or “sexing things up” – that emerges in the work. “When people think of ‘queer in Africa,’” she says, “they think of dead queers, murdered queers, raped queers.” She finds “refreshing” the “liberation of eroticism”; of one story she says, “you sweat… sometimes without the ‘s’”. These remarks suggest the positive component of queer writing in taking ownership of its identities and possibilities, triumphing in the everyday glories of its experience, rather than depicting homosexuality as a fragile life under endless threat of abuse, an alienated and melancholic literature. Xaba responds to this by considering the pleasures of sex, and says that “we live in a difficult time” when queer people have to announce their pleasure as a political act, rather than simply enjoy it as is their natural capacity.

Xaba reads from the preface to the book, and I transcribe it here as an invitation to readers to search out the volume: “The arts allow us to consider experiences radically different from our own, in ways that other forms of representation – research, reports, the media etc. – can’t. In imaginative spaces, dominant narratives hold less sway, possibilities we haven’t considered suggest themselves. We’re confronted with our prejudices and preconceptions and we may discover in others our own unrecognised selves. It is our intention, with this anthology, to productively disrupt, through the art of literature, the potent discourses currently circulating on what it means to be African, to be queer, and to be an African creative writer.”