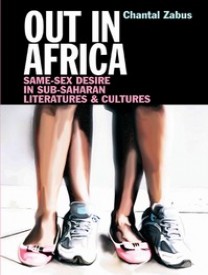 Out in Africa: Same-Sex Desire in Sub-Saharan literature and Culture by Chantal Zabus (James Currey)

Chantal Zabus begins her book where such a book must inevitably begin, by recording how widespread is the notion that same-sex sexuality is alien to Africa, a notion backed up by no supporting evidence whatever, but vociferously proclaimed by political authorities and some (notably US Pentecostal-supported) religious organizations. Yet, as a wealth of evidence, historical and contemporary, demonstrates, it is not homosexuality that is alien to Africa; rather, the alien import is homophobia. Countries such as Nigeria and Uganda have viciously homophobic legislation, but, unless it is whipped up by politicians and pulpit bigots, you won’t get a whiff of this on the streets of Lagos or Kampala.

Zabus’s book is the most substantial study of its kind (some 300 pages) and massively well-researched. As Neville Hoad and myself discovered when we prepared our more recent chapter on Africa for the Cambridge Guide to Gay and Lesbian Literature, launching such a project into print in recent years has been a tricky business. For one thing, the map of homophobic legislation (and contestation of that legislation) changes with bewildering rapidity: Hoad and I were forever amending our drafts as Uganda or Malawi swung one way, then the other, or as The Gambia suddenly appeared on the radar. Conversely, as LGBTI people face more widespread threats of persecution in Africa, there is a proliferation of work done by their campaigners and civil rights’ activists and by creative artists, so that whenever one gets into print one is sure to be left one step behind. Hoad and I were in time to catch on to the stunning lesbian-themed novel by Cameroonian Frieda Ekotto, Chuchote pas trop, which Zabus missed out on. All of us hit the shelves before the appearance of the short story collection Fairy Tales for Lost Children by Somali writer Diriye Osman, winner of a major British prize for gay fiction. That said, the range of Zabus’s reading is awesome, her analysis of the literature is illuminating and her building of the broad picture is a major intellectual achievement. And if all this sounds rather forbidding, rest assured her book is constantly, refreshingly readable.

After the Introduction, the neat title of which is an acknowledged borrowing from Alexander Doty, “To Make Things Perfectly Queer”, early chapters include one titled “Anthopological Wormholes” and deal with the construction of homosexuality during the colonial period. An iconic figure by now, the revered Native American man-woman gets the inevitable look-in (one is tempted to cry out “leave the poor berdache alone!) Important reference points for Zabus are two major works by Canadian historian Marc Epprecht, Hungochani and Heterosexual Africa?: The History of an Idea from the Age of Exploration to the Age if AIDS (texts that, like Zabus’s should be acquired by any library with a serious interest in African studies and by anyone concerned with the history of discourse on and from Africa). It is to Zabus’s credit that she is not tied down to Epprecht’s work, but moves around and beyond it. Especially revealing is her account of Stanley’s meeting with Mutesa and the significance of the latter’s martyrs (though reference to David Rubadiri’s famous poem would have pepped up the account further).

Like the present reviewer in a 1989 essay, Zabus maps out the generally pejorative representation of same-sex sexuality in the African literature of the 1950s and the decades following. And then: “the poor African soul is considered as indelibly corrupted [in these early works] until, as of the 1990s, an outing process literally takes place that catapults the naïve and often reluctant initiate of the 1960s into the politics of gay liberation.”

Later chapters are especially valuable because they eschew an encyclopaedic approach and, rather, offer s series of closely focused case studies, including one on stages in the representation o female same-sex desire, and one on homosexualities and apartheid (some astringent critical insights here into the work of Mark Behr and Stephen Gray). There are a few surprising omissions: although, for instance Zabus writes on the influence of Gothic she makes no mention of Gray’s weird and wonderful Drakenstein.

Her comments on myth—on the way writers are compelled to fall back on this—are astute. Although she might have made more of Guinean novelist Saidou Bokoum’s Osiris-focussed  Chaîne (a key text. I think) , she is enlightening on Osiris and Horus in Duiker’s Quiet Violence of Dreams (so much work is being done on that novel, a casebook is surely in the offing).

A very fine book, then. It doesn’t come cheap, but should be snapped up. Nice cover art, too.