From the prison world of Cameroon 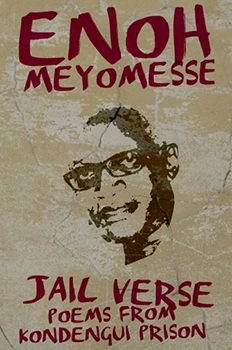 Despair
You visited me that day
and the black night, without stars . . .
you could cut it with a machete . . .
and you oh earth
yes you oh earth
you had stopped
turning

These are the opening lines from Jail Verse: Poems from Kondengui by the Cameroonian writer Enoh Meyomesse, who has been incarcerated for two years following a travesty of justice in a country he refers to as “our prison world of Cameroon.”

In 1984 Meyomesse was arrested for political activity in France in support of democracy in Cameroon; a decade later he founded the Party for National Rebirth. In November 2011 he was arrested again, at Yaoundé airport, and charged with attempting to organise a coup, possessing a firearm, and aggravated theft; in reality, his “crimes” were his writing and his political activism. The charges were dropped, but meanwhile Meyomesse had endured 70 days of solitary confinement, sleeping on the bare floor, followed by successive six-month extensions of detention. In December 2012 two charges were stuck to him, despite a total absence of either evidence or witnesses, namely, theft and illegal sale of gold. Meyomesse was not allowed to testify in his own defence. An appeal hearing has been repeatedly deferred, and Meyomesse remains in jail.

Despite the confiscation of other manuscripts, Meyomesse has succeeded in having a collection of prison poems published while still in confinement. Written in French, these have now been translated and are available from English PEN. A donation is requested.

In his Foreword, Meyomesse observes that such events as his trial and incarceration were familiar to him from testimonies from the Latin America of the generals and from apartheid South Africa, but “we never imagined that they were possible in our own country”. This is presumably deeply ironic, as since independence in 1960 and under the repressive regimes of Ahidjo and Biya, Cameroon has frequently been described as one big gulag. Writers such as René Philombe and Mongo Beti were harassed and imprisoned (Ferdinand Oyono, author of the celebrated anticolonial satire The Old Man and the Medal, survived – and indeed prospered – by becoming a loyal servant of the regime). It is not surprising that the brilliant Cameroonian novelist and academic Frieda Ekotto has published a book on prison literature (admittedly focusing on Genet). Cameroon is also a classic instance of the neo-colony, its considerable natural resources plundered by the West, assisted by a small and wealthy governing elite, while services such as health care and education have gone to pot. The Union of the Peoples of Cameroon (UPC) – the major, leftist party of the independence struggle – was decimated by the French military and Ahidjo, and its leaders, such as Ruben Um Nyobé, snuffed out (see Beti’s novels Remember Ruben and Perpetua and the Habit of Unhappiness). The repression continues, with only occasional loopholes, such as the existence of a newspaper press that is allowed a little room to breathe.

“We have translated all of this into poetry”, writes Meyomesse. The fact that Meyomesse’s poetry has seen the light of day is worth celebrating, but the poet himself hardly permits hope to take root. In one of several poems that utilise line spacing to break up a word, to draw meaning from behind meaning, Meyomesse fragments the words “L’écrivain” (the writer) into “L’E / CRI / VAIN” (the vain cry). Meyomesse’s poems tackle the horrific conditions inside Cameroon’s jails and admit the lure of suicide (“my heart it longed to hold / you close”). In a cry that is echoed throughout Africa’s neocolonial States, he protests: “is this the fruit of the fight for independence / that our ancestors tore from the hands of the Whites.”

Some of the strongest poems are satirical. In “The Library of His Excellence” the State President is imagined “inexhaustibly upright” (how often have demagogues employed the term “tirelessly” to describe their struggles for their people?). In another poem, making use of a startling oxymoron, “the people are huddled proudly behind their guide.”

And there is some bitter humour, laced with pathos; beseeching a Jesus of here and now, a crowd stumbles through a half-remembered prayer:

They kingdom come
um…um…um…
give us THIS DAY
our LIBERTY
um…um…yes…that’s it…
and make it quick!
AMEN