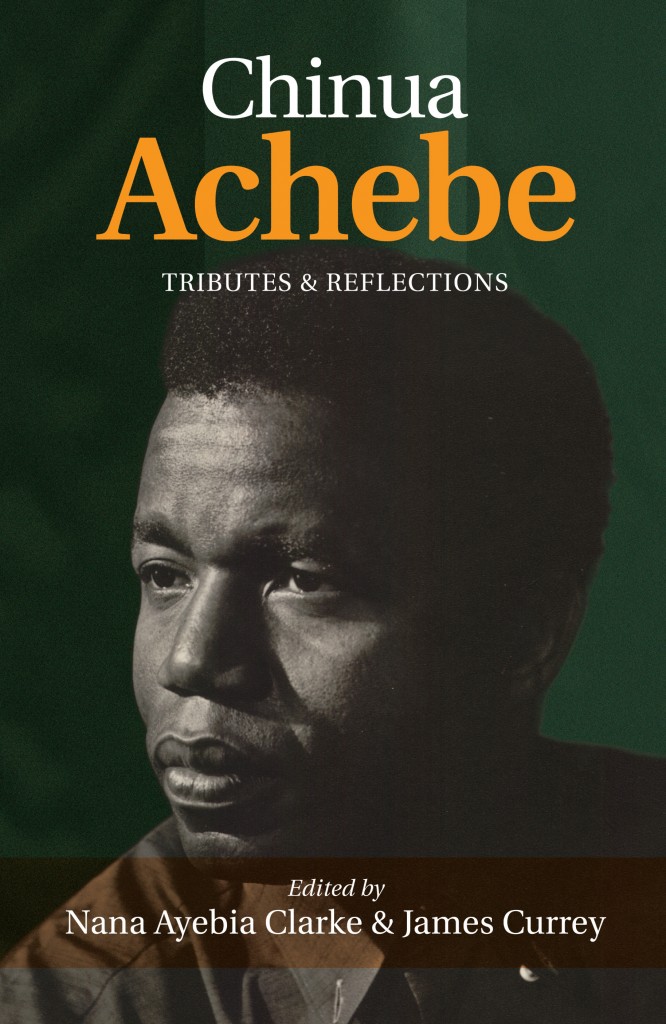 Chinua Achebe: Tributes and Reflections is a wonderful commemoration of Africa’s greatest writer, a book that no-one who is committed to Africa and who is concerned with the way Africa explores and represents itself, should be without.

Africa’s greatest writer, yes. I’m not going to get into that tired old question, is it Achebe or (his compatriot) Soyinka?, and I’m not overlooking the achievements of Ngugi, Gordimer, Sembene, Farah or Mofolo. But when Achebe died in March 2013, a shock wave went round the literary world.

Of course by then Achebe was known to be elderly and frail, confined to a wheelchair following an appalling road accident in his home country. He had not published a new novel for many years, but he had remained active as an essayist and autobiographer and had—after, it seems decades of hesitation—published There was a Country: A Personal History of Biafra, a major account of the most traumatic event in his life, the Nigerian Civil War. This was a book that ignited much controversy, as I’ll indicate below.

Tributes and Reflections identifies Achebe’s first novel, Things Fall Apart, as the one African novel people have read even if they have read no other. It has been translated into nearly seventy languages (and counting; can anything even remotely like that be true of any other modern novel?) and with tens of millions of copies sold.

In some of the essays that followed the novel—and with the novel itself as an object-lesson—Achebe argued that no non-African, not even ‘the most gifted or well-intentioned” could tell the story Africa had to tell, but only Africans themselves.

And wow, did Africans take that message on board. In his contribution to the volume, a poem given in the original Gikuyu and then in his own English translation, Ngugi wa Thiong’o records Achebe’s visit to the Kamĩrĩthũ community centre (before the Kenyan authorities, terrified by Ngugi’s radicalism, had it raised to the ground and Ngugi imprisoned).

He says: “Achebe was a man of the people / But not the Nanga [the corrupt politician of Achebe’s fourth novel] / I knew this when he came once to Kenya / I took him to Kamĩrĩthũ / Village women and men mobbed him / We send you out there to be our tongue/ Tell the world of the power within us / Tell the State to stop tying up our tongues / Ask them not to drive us from where our joy springs.”

Eloquent and courageous women and men!

To dig a little deeper into the nature of Achebe’s greatness. One of the major pieces in Tributes and Reflections is by the Nigerian scholar Ernest Emenyonu, who asks two questions: “What accounts for Achebe’s worldwide fame as a writer?” and “What is it about Things Fall Apart that makes it resonate with readers all over the world?” Emenyonu’s answers are cheekily matter-of-fact: Achebe happened and the novel emerged.

I’d like to offer alternative answers by comparing Achebe with Shakespeare.

Let us remember that Mandela said that Achebe was the writer in whose company the prison walls of Robben Island fell down. But also that Sonny Venkatrathnam , one of the prisoners on Robben Island had in his cell a copy of the Complete Works of Shakespeare, disguised as a Hindu holy book. And that at a point the book was circulated among the comrades, each of whom was asked to highlight the passage that spoke to them most directly. Not surprisingly, most of these passages resonated with the comrades’ commitment to the struggle. Mandela chose the “Cowards die many times before their death” speech from Julius Caesar.

In another fine recent book, Neil Macgregor’s Shakespeare’s Restless World, Jonathan Bate is quoted as saying: “Shakespeare was the soul of his age {sixteenth-century England] , but at the same time he never confined himself to the particularities of his historical moment, and that means that, because he sort of plugged into the fundamental questions about human society and human life, he speaks to every age. Shakespeare is always our contemporary.” (Bate is perhaps taking off from the well-known study by Jan Kott, Shakespeare our Contemporary.

And that seems to me to go for Achebe, too. Things Fall Apart is set in late nineteenth-century Igboland, during the first stage of the British colonial intrusion. It is highly particular, highly specific. But the fundamental things it has to say speak for everywhere, at any time. Okonkwo’s tragedy is one that everyone in the world can relate to and can weep for.

I’d never claim that Achebe is without flaw. I’ve always felt that in a famous and influential essay, his condemnation of Joseph Conrad’s novel Heart of Darkness as racist is simplistic. The task is surely to unpick that novel’s racist elements from its savage critique of colonialism.

And then there’s There was a Country. At one level this is a courageous book, one of the most thoughtful land heartfelt accounts of the colossal injustice and brutality of what was done by the world to Biafra. But when the book came out it was fiercely criticized in Nigeria for being divisive, and its critics did, up to a point, have a point. There is a certain strain in Igbo nationalism that can be odious, and some of Achebe’s emphases, for example, his condemnation of the Yoruba leader Obafemi Awolowo, can easily rub one up the wrong way. At the same time, in Kole Omotoso’s (irritatingly self-promoting) contribution to Tributes one does baulk at the accusation that Achebe’s book is thoroughly ‘mediocre.”

Back, though, to praise for Trbutes. It’s a substantial volume, with some 50-odd pieces, twelve of which are reprinted from elsewhere, the bulk original commissions, There is a wonderful cover photo by Lotte Weitner-Graf of the young Achebe

I have a few small quibbles. There are some typos. In an excellent piece by Anthony Kwame Appiah I was riled by the appearance of “riled” for ‘railed”, and in a Soyinka poem by bread” for “bred”; a clause from a sentence in the Omotoso piece appears twice, intruding like a shard of glass in the preceding sentence and making nonsense of it. It would, too, have been more user-friendly if the Notes on Contributos had appeared in alphabetical order.

But the book’s Ghanaian / British editors—to whom the growth of African literature on the world stage over the last half-century owes so much—have done an excellent job and there is such a wealth of goodies here. From South Africa there are fine tributes from Nadine Gordimer and Njabulo Ndebele. A personal favourite is a piece by Kenyan scholar Simon Gikandi (author of a major study, Reading Chinua Achebe). Gikandi records his nervousness at meeting Achebe for the first time—years after he’d published his study—and his uncertainty at what greeting to use, then his final choice of “Mr. Achebe, I presume”, and his and Achebe’s vast amusement at Gikandi using—to Achebe!—one of the most famous utterances of a British colonialist.

Another  favourite piece is a poem by Abena Busia, which prompted a storm of applause when she read it at the launch of Tributes in Johannesburg two years ago.

Apart from Gordimer, two Nobel literature laureates appear, Toni Morrison and Wole Soyinka. Morrison begins with a supremely eloquent and touching tribute, on the occasion of Achebe’s receipt of the African American Institute award: “I have the great opportunity to say some things in public that I have never been able to say to the person who is the subject of these comments—Chinua Achebe. My debt to Mr. Achebe is of the best kind. Large, minus repayment schedule and interest free.” And Soyinka is represnetd by one of the most powerful of his recent poems, “Elegy to a Nation: For Chinua Achebe, at Seventy.” Casting a characteristically baleful eye at Nigeria, he states: “have the rigours of survival bred a race / Of naked predators? / Is sharing out of fashion? / Community a dirty word, service an obscenity?”

I go beg-o, fork out some of your hard-earned and acquire this book.