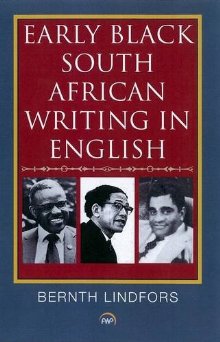 Bernth Lindfors is one of the most renowned critics and historiographers of African literature, and also one of the most prolific writers on the subject, whose dozens of essays are now being systematically collected in volume form. The present volume might have referred in its title to “Southern” rather than “South” Africa, as one of the authors covered is the great Lesotho novelist Thomas Mofolo. It is the fifth in a series collecting Lindfors’s essays, though the first, Early Soyinka, is rather different, comprising a collection of Soyinka’s early writings, edited by Lindfors. As Geoffrey Davis puts it in the blurb to the present volume, Lindfors is “never one to miss a good story” and the result is a volume impeccably researched, “perceptive, committed and eminently readable”. Although Lindfors is renowned for his generosity of spirit, he can also be pretty trenchant, suitably barbed, as in the pieces reprinted here on Dennis Brutus’s critics and on Mbongeni Ngema.

Lindfors remarks: “The majority of the essays in this book comment on work produced from the Fifties through the Seventies, when black writers, freed from [missionary presses such as Morija and Lovedale] found themselves subjected to pressures exerted by the State and strove to push back, using a variety of literary strategies to counter repressive measures.”

The first essay, “The Ambiguity of Evil in Thomas Mofolo’s Chaka”, addresses two questions: why did the Morija press refuse to publish the novel on its completion in 1909, and why did they then change their minds and bring it out (in 1925)? Lindfors bases his argument on the little documentation available, amply bolstered by what he calls “the more comfortable realm of unencumbered armchair speculation”. This is not as flimsy as it sounds, since his approach is centered on his analysis of Chaka as a “syncretic” work, one of the strengths of which lies in its “splendidly ambiguous amalgam of Christian and [non-Christian] dogmas”. Lindfors quotes Stephen Gray’s description of Chaka as a “desperately schizophrenic novel” – it certainly is such, but how this works! Although this may be spiking my own ongoing research, one possibility Lindfors overlooks is that Mofolo may have substantially rewritten the novel post-1909, in the light of a (mission-prompted?) reading of Macbeth; this would certainly help explain why the work changes course so sharply after its first few chapters.

“The Short Happy Life of the South African Short Story, 1951-1963” is largely on the work of the Drum writers. It would be nice to see what Lindfors might have to say about the current efflorescence of the short story in contemporary South Africa. Pending that, his assessment of the various explanations for the popularity of the genre in the Fifties is astute, quoting comments by Mphahlele and Nkosi. He traces the transition from the short-lived African Drum to its much more successful, thoroughly urbanised successor, quoting one dissatisfied reader of the former: “You can cut out this junk about kraals and folktales and Basuto in blankets . . . You’re just trying to keep us backward!”

Lindfors also extends his coverage to the work of writers with “very strong political opinions” who published in magazines that advocated social and political change, writers who were less inclined to pen frankly commercial stories such as “Passionate Intruder” and (a personal favourite) “Corpse in the Lift”. This reminds us how timid Drum was, essentially, though Lindfors is fully aware of its best work, paying detailed attention to stories by Can Themba, Richard Rive, Alex la Guma and others. Towards the end of the essay he lists authors whose work was banned, being “indecent, objectionable or obscene”: where else could you find Stalin sandwiched between Mickey Spillane and Tennessee Williams, or The Constitution of the Communist Party of China snuggling up to Hopalong Cassidy?

“Dennis Brutus and his Critics” begins by noting the critical neglect of Brutus (at the time the essay was written, in the Eighties), then examines what critical response there was: From the appreciative Ulli Beier (publisher of Brutus’s first collection, for Mbari, Nigeria) to the snide – indeed, downright unfair – J.P. Clark-Bekederemo (at the time, one of Nigeria’s notorious literary henchmen). Lindfors quotes Alexander Pope here: “All seems infected to the infected spy, / As all looks yellow to the jaundic’d eye.” Perhaps the worst criticism of Brutus might be found in the lamentable work of Bahadur Tejani, who described Brutus as a “mixed-up mulatto and simple-minded religious freak”. Lindfors doesn’t mention that Tejani accused Brutus of eager complicity in the same-sex sexual activity he recounts in his prison poems. Had Tejani concluded “all these faggots should be nailed to a tree” it would be consistent with his general level of thinking, which Lindfors berates as the “amateur psychologising of biographical criticism at its worst”.

Most striking of all the essays, perhaps, is “The Rise and Fall of Mbongeni Ngema” on the Sarafina 2 disgrace. Here, the gentle, kindly Lindfors’s somewhat unexpected aptitude for acid wit comes into its own – to be read in conjunction with the relevant section of Pieter-Dirk Uys’s Elections and Erections, which includes a couple of superbly cutting Zapiro cartoons. Lindfors begins plotting the unhappy trajectory with a detailed account of Ngema’s very real achievements from Asinamali! onwards. Looking back, it boggles the mind that Ngema became guilty of such a degree of “rapacious greed and financial mismanagement . . . artistic incompetence and megalomania”. But then the story doesn’t stop there – elsewhere, I seem to recall Lindfors has written on the flatulent The Zulu (or this may have been Eckhard Breitinger).

Amongst other essays are pieces on Peter Abrahams, La Guma, and the emergence of popular protest poetry and drama. There are also four extensive interviews; those with Richard Rive and Njabulo Ndebele are especially valuable for the sheer plasticity – the concrete, vivid detail – with which they recount the writer’s life in South Africa and Lesotho.