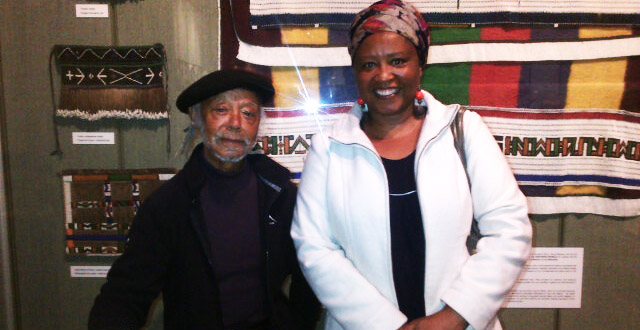 “Love is a revolution”: These are Dr James Matthews's introductory words to his poem “Weave me a fantasy” which he read at the Stellenbosch Museum recently.

It is about 8:20pm on a Wednesday evening. The screening of Diaries of a Dissident Poet, a documentary on the life and works of Dr James Matthews, poet, activist and writer, has just been screened. It is time for the poetry reading and a chit chat with guests. When I ask Matthews how he arrived at a point in his life where he writes about love, and not revolution, his answer is that love is a revolution, albeit of a different kind. “I no longer write dissident poetry. Back then I did what I had to do. I wrote to overthrow a racist regime. My writing was meant for the voiceless people in the townships. Now I write love poems. When I write about love, I don’t bullshit”.

Diaries of a Dissident Poet, directed and produced by Shelley Barry and Bernard Sterk, gives a detailed insight into Dr James Matthews’s life. Born in Bo-Kaap 84 years ago, Matthews’s journey has been arduous, interesting and rewarding. At the age of fourteen he suffered a debilitating head injury when pushed over a wall. This left him with mental epilepsy, a condition that affects the memory. Miraculously, this did not affect his writing, and when one of his teachers gave him twenty one out of twenty for a composition, he realised that he could write, and writing became a form of therapy.

Today his children are proud of their father’s achievements. His son talks about being at a “good place” with Matthews although this was not always the case. Throughout his adult life their relationship was “quite uncomfortable”. His daughter shares the same sentiments, and comments that, as an adult and a mother, she has “respect and admiration” for her father. She is also grateful that he cooked and cleaned for them, at a time when it was rare for a man to do so. However, she feels he could have “spent his time better”. At this, Matthews gives a naughty chuckle: “My drinking was a huge problem until one day I made a decision to stop drinking and to concentrate on important things. It was either I use my writing to fight apartheid or become the town drunk”.

Matthews is convinced that “art is and should be part of the people’s struggle and that dissident poetry was important.” When he started writing in the 1970s, he had no idea that he wanted to be a poet. “I did not want to be trapped in the concept of being a poet”. Matthews’s poetry earned him prison time but he continued to write, often smuggling it out of prison via his daughter who hid the poems inside her baby’s nappies.

Matthews reveals that the quest for freedom was the driving force behind his poetry and that: “freedom is not brought about by the colour of the skin or bought in a supermarket. It comes when all of us are free. This is why I later moved away from black consciousness. Pigmentation cannot play a part in it”.

Today, Dr Matthews is happy with his achievements; more so because the University of the Western Cape has awarded him with an honorary doctorate for his literary and political work. This honour makes him feel like “a rock star”. Dr Matthews’s latest offering is an anthology on aging entitled Age is a Beautiful Phase, from which he reads a few lines:

Matthews plans to continue writing way past the age of 90. He frequently reads his work to senior citizens urging them not to be afraid of old age and death. He says: “Being old allows you to rid yourself of garbage people. You can look at the trees and the flowers. And, when we die, it’s just a resting place so don’t feel bad about death… dying is just opening a door and going somewhere else. Age is a beautiful phase”. All I can say is that Dr James Matthews is a riot; a slight man with big and revolutionary ideas – a rock star – a dissident poet!