The life and times of Mbu Maloni: Launch of Nobody will ever kill me 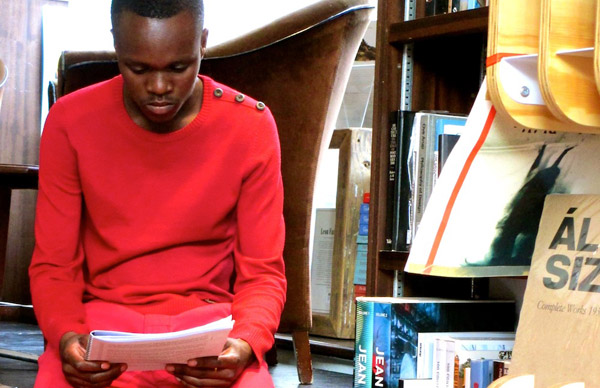 Launch of Mbu Maloni’s Nobody Will Ever Kill Me, Book Lounge, 24th October 2013

At first, Mbu Maloni’s serious demeanour and grave expression seem out of place in the cheerful hubbub of the Book Lounge. The young man stands, clad from head to toe in bright red, before his amiably attentive audience. He clutches a copy of his book, ‘Nobody Will Ever Kill Me’ in his right hand, and seems to regard the audience sternly, before addressing those gathered there to support the launch.

Lutz van Dijk crouches on the floor to Mbu’s side, holding the microphone up to him in what could be interpreted as a symbolic posture. Van Dijk is the co-author of Mbu’s book, and the benefactor who made it possible for Mbu to have released his book in the first place. A successful writer in his own right, van Dijk is also nothing short of philanthropic, having founded the children’s home, HOKISA, where Mbu lives. Having introduced Mbu and his accompaniment, van Dijk happily obliges Mbu’s request to hold the mic for him, immediately hunching his tall frame to accommodate Mbu’s wishes. It speaks to van Dijk’s giving nature, and edifying spirit, as well as to the mutually respectful relationship the pair seem to share.

The audience is solicitous while Mbu reads segments from his oeuvre. He begins with an excerpt from his book, and later moves onto short stories that have been published on the mobile reading site, fundza.co.za. The book is dedicated to the memory of his friend Artie, Abongile Rwanga, who was killed in a fight. Its rationale lies in Artie’s telling Mbu: “Street kids’ lives are just as valuable as other people’s lives”. The writing style is accessible and simple, words acting as vehicles for his message more than brushstrokes on the page’s canvas. Much like Mbu himself, the narratives are delivered with stark, raw honesty, and without any superfluous embellishment.

His first tale recounts the ache and exertion of going hungry for days on end. The account is blunt and straightforward, not curtailing any of the gory details of how his deprived stomach reacted to a sudden influx of food, courtesy of his generous friend, Yamkela Dangisa. Afterward, Yamkela plays one of his original compositions on the electric keyboard. The friends are mutually supportive; Mbu introduces Yamkela by insisting that his friend will be famous someday.

Mbu’s next story is titled “Crazy For Love”. It’s a proudly South African sort of love story, in which he documents the first moment he ever saw his girlfriend Zombini, walking behind her on a Thursday morning. “It seemed like an ordinary Thursday, but it wasn’t – it was special, because of her,” he reads. The audience giggles when he recalls that he couldn’t find the words to speak to her, the only phrase in his mind being: “Hey you, you are so beautiful, can I just look at you for the rest of the day?”

Yamkela then plays another of his songs, repeating the refrain: “There’s something new in my life,” which fittingly ties into Mbu’s story.

When Mbu reads again, it is to recount the 29th of September 2012: the day his son was born. The recollection traces every step of the journey, concluding with him walking into Zombini’s hospital room, and seeing her clutching the tiny bundle that was his son, to her breast. He remembers her radiant smile as she turned to him to say: “It’s a boy.”

Mbu’s story is relatively ubiquitous amongst the urban youth of South Africa, but it’s his indomitable attitude and fresh approach that render its telling heartfelt, moving and inspirational. Having grown up in some of the harshest townships in the country, battling starvation, poverty and crime, Mbu has witnessed hardships and endured situations that would make it understandable for him to feel overwhelmed and defeated, like so many in similar situations. But rather than allowing his obstacles to become obstructions, Mbu has transformed them into opportunities. His dreams to complete his schooling, and go on to be a journalism student, and eventually a full-time writer, have not been smothered. Perhaps even more impressively, Mbu’s ideals of providing for his son, girlfriend and future are what drive him to achieve, to pass Matric next year, and to succeed as a writer.

When the question and answer segment of the afternoon concludes, the audience converges around the luminaries of the day. This may be Mbu’s first launch, but it’s unlikely to be his last.