The Jermination of a New Book 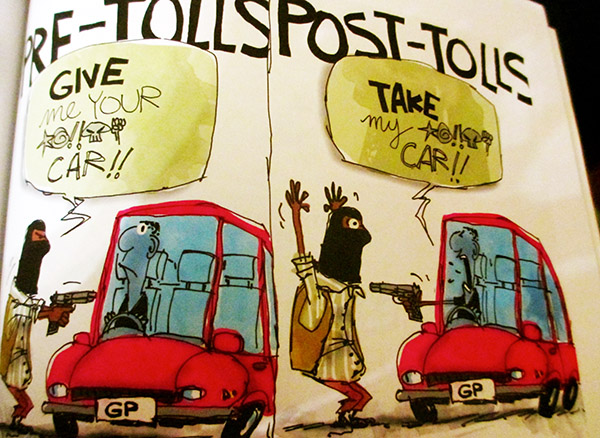 As I sprint down Roeland Street, the wind attempting to hinder my progress as it howls in the late afternoon chill, I am convinced that I’m late and have missed the entire event. As the familiar pink façade of Cape Town’s Book Lounge appears before me, I slow my pace and burst, panting, through the doors. To my surprise, though it is nearly half an hour later than the scheduled starting time, the venue is still half empty. As it turns out, the murderous traffic coming into Cape Town didn’t just slow me down – everyone is running a bit behind schedule. As if on cue, just as I’ve secured a spot right near the front, Jeremy Nell arrives and the launch of his volume of political cartoons, “Jerm Warfare” begins.

Jeremy Nell, or “Jerm” as he is more popularly known, is younger than many people in the audience were expecting. Indeed, he is one of the most impressive young cartoonists South Africa has to offer, having been honoured with multiple awards for his craft, including two titles at the 2011 Vodacom Journalist of The Year awards, and recently having been named one of The Media magazine’s top 40 under 40. Fittingly, he is respected and held in high esteem by a number of comic stalwarts, including the remarkable Jonathan Shapiro, who is in attendance amongst the crowd at the Book Longue for Jerm’s launch.

Jerm is put in conversation with Ray Hartley, previously the editor of the Sunday Times. Hartley was the editor that first hired Jerm in 2007, and it is at this chronological juncture that their conversation begins. Prior to beginning to work for the newspaper, Jerm’s presence was largely internet-based, and not at all politically inclined. “I just liked to draw funny things,” he insists. He jokingly adds, “When I started to do political stuff was when I had to actually learn to draw!” Hartley clarifies this statement, pointing out that political cartooning requires caricature – a technique which, until the time he was employed by the Sunday Times, he was unfamiliar with. “In those early days, I found Thabo Mbeki the easiest to caricature – he always had very characteristic facial hair,” Jerm kids.

What is noteworthy about Jeremy Nell’s art, is that he does all his drawings digitally, and not with traditional pen and ink. When quizzed on why this is, he’s adamant that it was a “pragmatic” move, not a preferential one. “It may sound funny, but all that paper and ink is really expensive,” he says, “I simply couldn’t do it, financially.” He defends his technique, though, saying that he still “draws” his images, “Much like Zapiro and those guys,” he says, gesturing towards Zapiro in the crowd, “except I sketch with a stylus on a lightbox.”

The two discuss the controversy that has sprung up around the cartoon that Jerm released just last week concerning the controversial Red October march. Jerm explains that the week of threats and insults engendered by the drawing, and his statement deriding the practice, has been the worst criticism and public backlash he’s had to deal with to date. “It gets pretty dark, reading the thousands of messages from people wishing you dead,” he says somberly. But he doesn’t regret publishing the cartoon or being outspoken on such matters, he is quick to add. 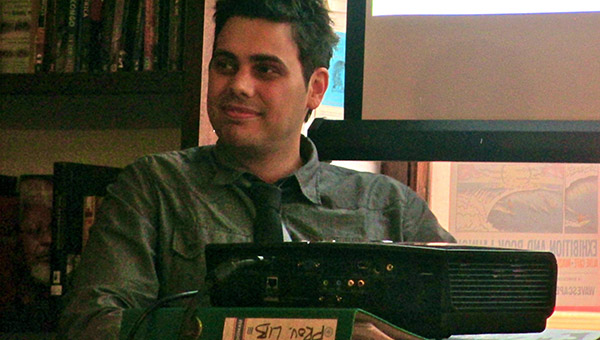 This leads into a discussion about the difficulties of being a professional cartoon artist. Jerm accepts that unpopularity with certain groups, as well as offending people, is part of the landscape of being a professional cartoon artist. He has been famously controversial since switching to political commentary, even getting fired for being “too political”. He says that sometimes he worries about how the editing team will receive his gags, citing as a specific example the penis-turrets that adorn the cartoon castle he created for Zuma, an image that now emblazons the cover of his book. “My editor at the time was a woman, so I was even more nervous about how she would see that! But luckily she thought it was hilarious.” he says.

In fact, in his opinion, the deadlines are the most devilish aspect of cartooning. “You’re producing new stuff everyday, you know? So sometimes it’s just a challenge to come up with that much material!” He jokes that the South African political climate makes it easy for cartoon artists: “Sometimes I second guess my gags, [for fear of getting into trouble] but the fact is that it honestly is what the guys just say sometimes!”

Jerm is clear on the point that he is not political, and not trying to educate anyone. “I’m not left-wing, or right-wing, I’m middle-fingered,” he quips, to the audience’s delight. The interview seems to end even before it’s begun, and the giddy, giggly crowd are forthcoming with questions; both silly and serious. While “Jerm Warfare” is not exactly highbrow literature, Jerm’s strips are provocative, witty and current, and the superficiality of the event is disappointing. Having expected an explication of some of the gags and some featured images; it was dismaying to get only a dry discussion of Jerm’s work. The launch does not do the volume justice, as the book itself is brilliant. It houses a wide range of his collection – all spiced with his distinctive flair and spunk (not laughing aloud is a real challenge) – from the political and “The Biggish Five”, to social commentary and great jokes, it is worth a read.

I just wonder if fighting rush-hour traffic to and from town was worth the event.