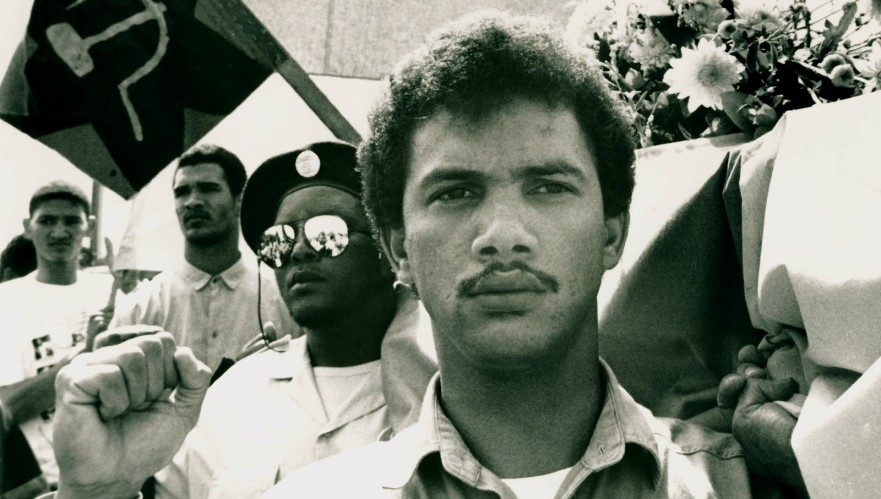 The man in the stylized black and white image seems familiar. In the picture, a microphone is visible before him, his brow is emphatically furrowed, and his mouth frozen in a courageous shout. The beret he wears calls to mind the emblematic Che Guevara, and it is clear that, like the iconic Cuban, this man was a revolutionary.

The man in the image is Ashley Kriel. The drawing of his face shouts silently over the heads of the guests filing into the auditorium at the University of the Western Cape as they filter in for the tenth annual memorial lecture, hosted by the Institute for Justice and Reconciliation. The evening commemorates the life and struggle of Ashley Kriel, a youth leader from the Cape Flats who was brutally murdered at the age of 21 by the Apartheid regime. The Ashley Kriel Youth Development Project, an instrumental group in the organization of the evening and the furthering of youth development in the area, lauds Kriel as being “the archetypal representative of student and youth leadership during the 80’s”.

The master of ceremonies for the evening, Stan Henkeman, further elucidates Kriel’s particular position as symbol for the event. “He was fierce, compassionate and truthful,” Henkeman informs the rapt audience. “He was always thinking of other people, fighting for just cause and for a just society.” He encourages the youth in the audience to live their lives fully, as Kriel would have done had he had the chance. “Ashley Kriel didn’t have the benefit of seeing the fruits of his struggle,” Henkeman continues, “but you do. So grow as much as you can. Realise your potential.”

The theme of the Project for 2013, and accordingly the event, is “My Voice, Our Story.” After giving special mention to both of Kriel’s sisters, who came to witness the event, Henkeman stops short of turning the evening into a panegyric, and hands over to the esteemed speaker of the evening, filmmaker Kurt Orderson. 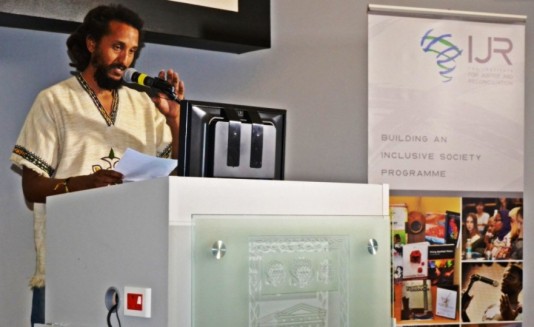 Orderson is unassuming and humble as he accepts the floor. It is clear in the amphitheater-designed auditorium that every eye is tracking the tall man with the serious eyes, dreadlocked hair and linen clothes. His presence is regal but modest, a contradiction that resolves itself as he begins his address. It is a multifarious account that discusses overarching principles relating to individuality and what Orderson dubs “radical subjectivity”, the politics of identity within the diaspora, and ways of defining a vast objectivity, as wells as recalling his personal history, family ties and occupation as a filmmaker.

One of Orderson's major issues has to do with the roots and origins of the “so-called coloured” demographic in the Cape Flats. He accuses South Africans of denying their African roots in favour of European ones as a result of people accepting “pre-determined stories” as their own history. “There is an entire archive that seems to be hidden from the collective memory, [as a result of Apartheid],” he states. “But you need to be the master of your own mind. You have to believe you are not a slave in order to fight for freedom.”

He refers consistently to Ashley Kriel’s thesis, arguing that when it comes to directing one’s character, or “greater mind”, you have to “believe yourself as being MORE than a victim of your circumstance”.

The audience is stimulated by his speech, and after it a lively question and answer session ensues. Orderson answers every query with earnest aplomb, never appearing daunted, even by the most challenging questions. He never strays from his beliefs, either, maintaining a focus on his philosophy of taking ownership of one’s own thoughts and controlling your own subjectivity. On the topic of racism and the government, Orderson says “Don’t let your self be bamboozled, don’t get it twisted. [They all have] an agenda. The agenda is power. Power of your mind. Take it back!” In accordance with this statement, he insists that “separation [between the people of South Africa] is a myth”, questioning why it is that we are encouraged to celebrate our differences and diversity, as opposed to our similarities.

To generous applause, Orderson takes his leave of the podium and the floor is offered to SLiP and Inzync’s own Adrian Different. Diff stokes the embers of the already warmed-up crowd, calling for them to become vocal in a raucous greeting. He then perpetuates the theme of being outspoken against troublesome happenings within the nation, criticizing the famed failure of the Department of Education to deliver books to rural schools. “The books will arrive on Monday,” he iterates in the refrain, “We are doing our utmost.” The poem’s satire is perfectly suited to the occasion, being both topical and appropriate for the youths who comprised the majority of those gathered. 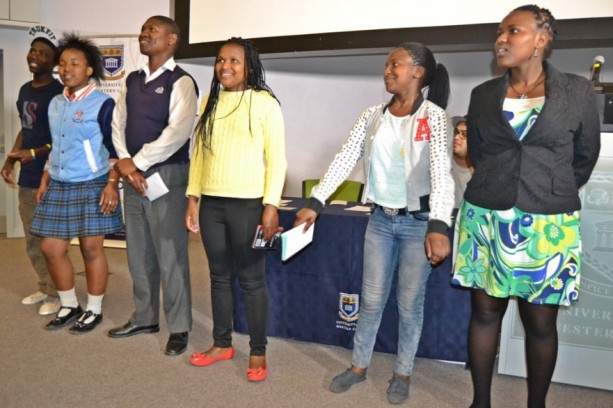 With great ceremony, Different then introduces the INKcredibles to the stage. The group of local youngsters, namely Palesa, Sam, Vusi, Nthateng, Chrystal, Pulosetsoe and Genevieve, unassumingly accept their position at the fore of the room. From the first word of the first poem, aptly entitled “I Value My Voice”, the audience is transfixed. The poem delineates how important it is for the youth to be heard, but stops short of being clichéd or repetitive. Instead, it explodes the ubiquity of the phrase “to be heard”, and reassigns power to the speaker, granting the poet agency and declaring: “my stem is waardevol”. 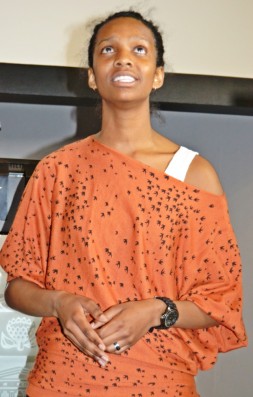 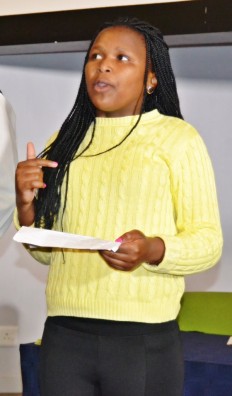 The fiery Chrystal Williams is the first of two INKcredibles to perform a solo piece. Her poem, which drove the crowd wild at last month’s Inzync session, does not disappoint. She is also in keeping with the “My Voice. Our Story” theme as she employs the parlance of high school children as a means to communicate her stance against oppressive and suppressive forces in society. She plays cleverly on the word “ruler”, remarking that children are taught by rulers to draw in straight lines with rulers “so you can rule us”, and later beseeching individuals to discard the moniker of “ruler” and instead to “lead without a title”.

Chrystal performs bodily and convincingly, owning the voice wat haar irriteer, using language playfully and controversially as she dances over the cadences and percussions of her vernacular Afrikaaps. She coaxes the audience into giggles with her audacious imagery, and elicits jokingly scandalized gasps from them. As she continues, this is punctuated by whoops, applause and nods of agreement as she tells her stories to the appreciative audience.

The more subdued and heartfelt Nthateng Machaea follows Chrystal’s performance. Nthateng’s first poem is certainly her strongest as she takes ownership of her ancestry, boldly and assertively repeating: “I am the child of the great good lords!” Her sentiment connects again to Orderson’s emphasis on true ancestry and accepting one’s heritage. In her second poem, Nthateng reveals her vulnerable side, as she takes the audience into personal recollection. The piece describes how a young girl refutes her mother’s advice and begins a relationship with an unsuitable boy. The encounter leaves the speaker with a “virus” and nothing more.

Rimestine is next to take the spotlight as he steps forward and picks up the pace again. His pieces are also a critique of the government, and the corruption within it. His first piece is entitled “Dankie vir Niks” and is aimed at Jacob Zuma. He recounts the short comings of the political system and the failure of democracy, ending his piece saying: “Kan u die deur oopmaak, asseblief? Ek wil yt.” His following piece is equally energetic, as he confronts the “coloured” paradigm and the assumptions adhered to it by South Africans. A seasoned performer and accomplished poet, Rimestine’s poems work like a flood that pull the audience in a current of rhythms and refrains that have the crowd “Mmm”-ing their approbation. His second poem metatextually recognizes the power of his writing, as he wars “ek sal in jou keel afspring soos 'n ystervark met penne in!”

Altering the pace once more, Pieter Odendaal arrives on stage to perform a love poem, thanking the subject for their physical composition. Odendaal – another masterful poet – uses terms of biology to paint the image of his beloved, thanking everything from the cells to the sinews in her body for comprising the beauty of her being. The piece is poignant, and a change in tone that offers depth and variety to the evening.

Bookending the night, the INKcredibles take the stage once more to perform “This Is It”, a poem about the transusbstantiation of pen, paper and poetry into autonomy, liberty and individuality. The piece is emotive and accessible, again employing the range of languages and voices available to the group. The INKcredibles, living up to their name once more, received enthusiastic and uproarious applause as they left the stage, perfectly concluding an evening that was expressly hosted in order to honour the youth and their position in South African society. Fittingly, the young poets paid acute homage to Ashley Kriel, what he stood for, and his legacy. 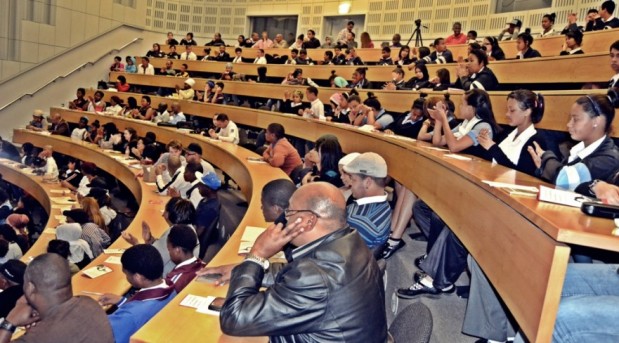