Launch of But Will It Stand Up In Court? by Zapiro, 27 November 2012, The Book Lounge, Cape Town

Jonathan Shapiro takes his spot in the upstairs section of Cape Town’s Book Lounge, but he is backed up right against the wall by the sweaty, enthusiastic and diverse group gathered there. Guests of every age, status, occupation and description spill out of the packed room and onto the sidewalk outside: they sit perched on chairs, bookcases, counters, banisters; they stand, hot and expectant, on every available inch of floor; they’re huddled around the man himself, and around copies of his latest annual, But Will It Stand Up In Court?

Zapiro needs little introduction to South African audiences. He is introduced as being “the most important satirist, cartoonist, activist, journalist, in South Africa at the moment”. Most recently, the animated and lively cartoonist was awarded the International Publisher’s Association “Freedom to Publish” Prize for his exemplary courage, and locally he was honoured with the Standard Bank Popular journalism award for Authorial Cartoonist of the Year. Zapiro’s brand of expression is uniquely effective in South Africa. He speaks to the zeitgeist, all the while transcending the divisions of culture, language and class. It is no wonder that he is viewed as “inspirational and fearless” by so many.

By way of introduction to the annual, whose title he derived from Private Eye of the 1960’s and 1970’s, Zapiro talks about his friendship with the artist Brett Murray. The cover of the annual sports a drawing of Zapiro’s interpretation of Murray’s “The Spear” and a handful of people looking at the painting, with the title “But Will It Stand Up In Court?” emblazoned above the image. “I had good fun coming up with the cover,” says Zaprio. “In the end, the title was fed to me by none other than Brett Murray!”

In his characteristic entertaining and candid manner, Zapiro tells his rapt audience about his experience of the furor Murray encountered when “The Spear” outraged parliament. Early on in the ruckus, Murray had approached Zaprio – a seasoned expert in dealing with media attention, legal disputes and political disdain – for advice. “By, I think it was day three, I had to tell him, ‘Sorry, Brett, I am no longer the expert here’, things got so out of hand,” says Zapiro, explaining that Murray is “not a media animal” in the same way that Zaprio is, and that he is not used to “defending the artwork like I am. I’m used to talking to the media, talking in general, talking…maybe talking too much,” he quips.

From this anecdote, he goes into a number of descriptions and explanations of the work in the publication. The images appear on the slid-show screen behind him as he explains their significance and motivation. The first image is of Zapiro’s first response to the Brett Murray scandal. It depicts Zuma as he is drawn in “The Spear”, with the showerhead where the penis would have been. The showerhead, a feature that has been adapted by Zapiro in many of his caricatures of Zuma, spouts the words: “Sex scandal, corruption, nepotism, cronyism” – performing the task of re-contextualising the painting and mitigating the uproar surrounding it, in Zaprio’s opinion.

The next few images depict the president in a number of different guises, and Zapiro explains each one’s importance. In a drawing of Zuma, in which he purports to be “Outraged at being called a philandering womaniser!”, Zapiro mocks the indignation of the presidential statement, perceiving it as concoction, and artificial, and not truly reflective of the president’s attitude whatsoever. Another image shows Zuma being plied with grapes, wine and palm leaves by a group of harlots, and yet another captures the hypocrisy, and the emptiness of the charade, that sprang up around Brett Murray, his painting and the Goodman Gallery.

Zapiro then introduces the audience to the Greco-Roman allegorical figures that have become popular in his drawings: Lady Justice & Freedom of Expression, who act as sisters. The women are devices used by Zaprio to depict a normative state of affairs, and he uses them often to challenge the status quo. Famously, it is one of his Lady Justice drawings that lead to the legal dispute between the Presidency and Zapiro this year.

“We have seen a concerted attack in the last three years on the media, whistle-blowing, on information and on criticism,” he says, sadly, as he displays a cartoon of Jacob Zuma alongside a can of black paint called “Secrecy” as he paints over the wall of democracy – Zapiro’s tribute to Black Tuesday, a day that occurred in the wake of the proposed Protection of Information Act. Another cartoon in this collection shows Lady Freedom of Expression fighting back – the flame of truth and information not being extinguished. 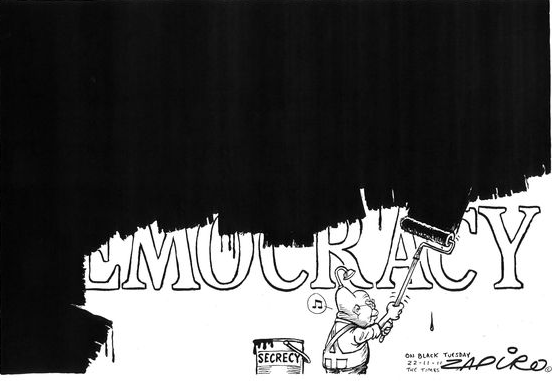 As Zapiro points out, if not for civil society and the media, many wrongs would go unrighted in the political system. He shows his portrayal of Richard Ndluli, drawn on a “Wanted” poster that decries his crimes, but also expresses how he is wanted as National Police Commissioner. “A certain pattern emerges,” says Zapiro, referring to Selebi, Cele and, most recently, Ndluli, who was prevented from becoming commissioner only by public outcry.

Towards the end of the presentation, Julius Malema’s image makes an appearance. “Some of you might be saying ‘Where’s Juju?’, well – here’s some Juju!” says our celebrity. The Malema drawings are consistently acerbic and funny. One of the best of them, following the tradition of excremental satire extending back to Aristophanes, Juvenal, Rabelais and Swift, portrays the expulsion of Julius Malema from the ANC as the extraction of a pimple on a great face. Chillingly, in a completely different guise, Zapiro depicts Juju at Marikana, walking over dead bodies, and speaking through the megaphone of opportunism. “I was trying to deal with it,” says Zapiro of the tragedy of the slain miners in Rustenburg.

It cannot be disputed that Zapiro fills an important function in the South African imagination. His connection with the spirit of the people, his wit and affability all come across as he interacts with his audience, freely and fluently answering their questions, and eloquently addressing challenges. The annual is a collection that amounts to a satirical chronicle of events over the course of 2012, providing both comic relief for serious situations, as well as intellectual engagement with difficult issues in our nation.

Satire and the limits of freedom of expression

Zapiro and the poets zap the system