The Beukes is back 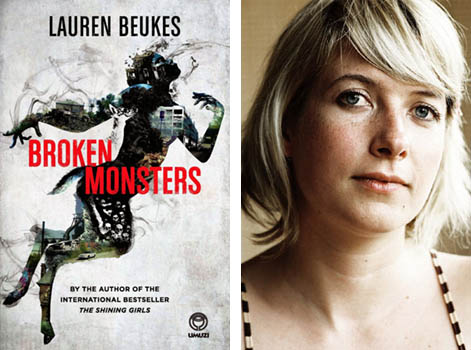 The Book Lounge is one of the few surviving bookstores that still feels like a bookstore and not like some metamorphosing (generic, corporate) store with a couple of books and a whole lot of paraphernalia: you know, book accessories, figurines and whatever else the “people up there” think will make a buck. Part of the Book Lounge’s survival strategy is their diligent hosting of book launches each month and, well, July certainly kicked off with a bang. In fact I’m pretty sure it’s to be the launch of the year – the release of Lauren Beukes’s Broken Monsters (HarperCollins).

Book launches are usually seated events. Except for “the Beukes” – she gets that room overflowing in no time. And while I can imagine that it’s for a number of reasons, it’s certainly also (primarily) because she’s a fabulous author: her worlds so singular yet familiar; threatening and dangerous but also alluring and, at moments, even comforting. The Book Lounge is decorated extravagantly, with dream catchers hanging from the ceiling and the thronging guests receiving a “Participation Pack” containing a number of things that only make sense if you’ve read the novel (the proceeds for the pack go to charity!)

Before discussing the novel with (that most astute of journalists) Rebecca Davis, Beukes read a passage from Broken monsters:

The body. The-body-the-body-the-body, she thinks. Words lose their meaning when you repeat them. So do bodies, even in all their variations. Dead is dead. It’s only the hows and whys that vary. Tick them off: Exposure. Gunshot. Stabbing. Bludgeoning with a blunt instrument, sharp instrument, no instrument at all when bare knuckles will do. Wham, bam, thank you, ma’am. It’s murder Bingo! But even violence has its creative limits. Gabriella wishes someone had told that to the sick fuck who did this…

You get the gist. Like The Shining Girls, which was set in Chicago, Broken Monsters is also set in the United States – this time in Detroit – and although there isn’t a time travelling killer in this novel, there is “a sick fuck” out there, one Detective Gabriella Versado is trailing. And as with any serial killer trail, this one too starts with a body: the body of a boy – a half-boy to be exact – joined together with half a deer. (Yes, you know the Beukes is back when eerie is the first thing you feel, followed by that by now familiar feeling that you have to know more. Now!). Davis asked her a series of questions about her work process (slow and filled with procrastination), the role the internet plays in her work (a big one) and the settings for her novels. Beukes tells us that it’s difficult to balance the exhortations of the publisher and the need to escape the overdetermined political landscape in South Africa with her desire to write another text set here. It’s a compelling answer.

Enough said. Get the book. Tell your boss you’re ill. Whatever. But be warned: you’re going to need an excuse.