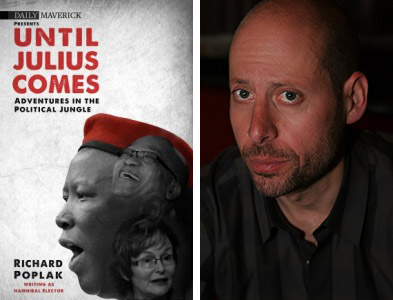 Wheeling, with a few minutes to spare, into the Book Lounge (just voted the Best Independent bookshop in the country), the amount of interest tonight's book launch has garnered is striking: almost every area of the shop's street-level floor-space not occupied by books is occupied by people. They are dutifully early, having already snagged a spot, wine in hand, to watch this evening's entertainment, the political topicality of which has caused the wine sponsors to request the covering up of their label, in case it was “a political event”.

Popular writer for the Daily Maverick, Richard Poplak, is well known for his astute political commentary and the “muscular charisma” of his writing. His interlocutor, feisty voluble writer, Marianne Thamm, introduces him as “the Malema of the world of journalism” and “the Christiane Amanpour of madness”. The book – part journalism, part poetry, part literature, literary-fiction, part philosophy – takes the reader on a journey through the matrix of the South African contemporaneity. Throughout the evening, Thamm plugs it as the most important South African book in the market, which “you will regret not buying.” The sort of thing, she says, that you'll bring out to read to your guests over dinner.

Writing for the Daily Maverick, Poplak admits, has required him to train himself, by dint of his experience and wide reading, to become the “Usain Bolt of writing.” Having experienced frequent creative shutting-down in Canada where he began his professional career as an aspiring filmmaker and painter, Poplak found his political imagination continued to reside here in South Africa. Now returned, he is enthusiastic about the space given to journalists to pass commentary and criticism on the structures of authority – “inziles”, as Thamm calls them, who can still throw stones until they get what they want. The experiences of a journalist is that of “one unbelievable acid trip, politically”, where a tax-dodge can stand up in Parliament and take on the president, where the Edgars Club has more members than people who voted for the EFF (Red Square takes on Red Berets?), the country's own president is booed at a worldwide funeral broadcast and Poplak declares a wish to one day fashion a quilt for himself from a single day of the litigious reams of DA press releases.

Indeed, when put together, the insanity of our unique reality seems too ludicrous, and is further underscored by the eclectic mix of the audience, and a keening passer-by who caterwauls three times past the window – his praise singer, Poplak jokes, thoroughly diverted by the character. Yet though Poplak and Thamm engage mostly in humourous and brightly satiric conversation, there is still a more sinister element to the potential of power in the country, a theme that seems to underlie the questions and commentaries that are aired by members of the audience. The sense of Jacob Zuma losing his grip, the ludicrousness of political press conferences whose information cancels each other out into “a black hole of zero information”, the shaky ANC machine which is owned 100% by corporate interests (“If that doesn't make you furious,” Poplak interrupts himself, “then nothing should, and just lie down and let the grass eat you”), all somehow form a part of the deteriorating, bigger global meltdown – “we're not exceptional,” asserts Thamm adding that Poplak's book is global.

How then do we fix it, Thamm asks, tantalisingly hinting at Poplak's concluding chapter. Though they have discussed the need for South Africans to continue to throw stones, to burn it all down, and not without a peculiar sense of relish, the answer, as given by Poplak in his book “How should we do this? How the hell should I know?” We do this, he muses, “by becoming people, by understanding that every lie, every act of corruption, every step along the road to completing Fantasia's fortress is one that requires our collective attention.” Both strongly urge the need for the collective and community which the world lacks, and a closer solidarity between the middle class and working class.

In the meantime, though she asserts that “this is what's happening” and that they're not just “two mad revolutionaries wanting to be Malema”, one gets the sense that both Thamm and Poplak have many more stones to throw, and plan to enjoy the denouncing of Poplak's book by Helen Zille on Twitter.