Performance and interpellation of an unhealthy variety 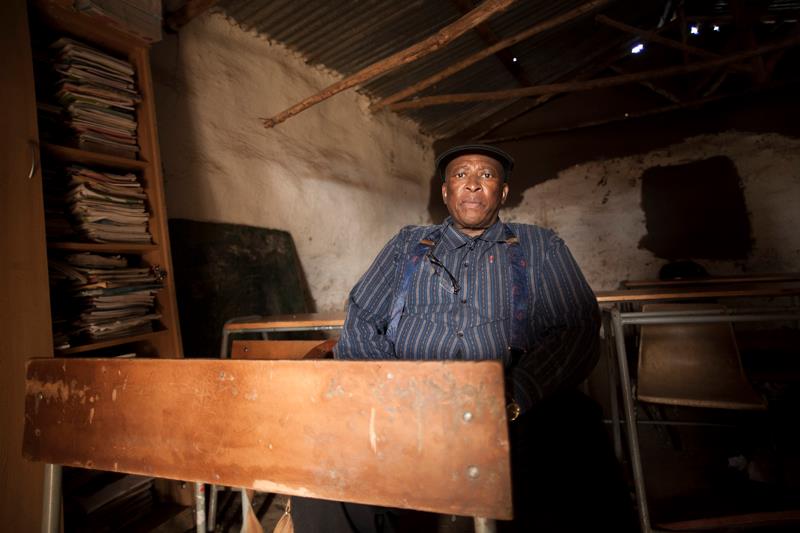 Tonight at the Book Lounge, a corporeal mesh: a sprawl of bodies leading outside, and inside – the atmosphere is sweating and thick, glancing moments of impromptu frottage are everywhere. I’ve never seen this place so thickly attended, but I’ve heard this chorus of sighs, this drowsy murmur of “mmms” and “yeses”, before. Zakes Mda, Njabulo Ndebele and Sindiwe Magona – a trio of black literary luminaries – are seated on the top-floor dais. They are giving their impressionistic accounts of the Eastern Cape Schools Solidarity Visit, from which they have just returned. The dominant tropes are those of devastation (“I am absolutely devastated”) and also of human ordure (“filthy toilets left many of us devastated”). But while it appears that these three celebrities are here to simply report on the derelict conditions of Eastern Cape education, I want to suggest something far more sinister, far more banal, is actually taking place.

Mda begins by saying, “I did not expect to see what we saw there in the Eastern Cape […] the same kind of situation I experienced fifty years ago.” He speaks of “overcrowding”, and “collapsing buildings”. He says, of these young learners who are condemned to study under such claustrophobic conditions, “the problem is not one of financial resources. We have money in this country. A lot of money that was budgeted for these things and sent to the provinces – billions of dollars – were returned to the treasury unspent, because there is no capacity. We have no capacity to spend and build classrooms so our children can attend school in healthy conditions.” Sindiwe Magona summons whipping-up oratory, in which she enjoins her listeners: “You are a citizen in a democracy, you have the power to change [this]! We are not living under a dictatorship; this is not an Apartheid regime,” this last delivered in that scorched and rising inflection of the activist. The crowd is thrilled in slow and orgasmic shivers of excitement. It is amazing, the potential for reality to compress cliché. Magona goes on to say that “What we saw there is, if not a sin, a crime” and “What we saw there is something no human eye should see because it should just not exist.”

It is Ndebele who resists this “devastation” trope, and instead says that he is angered and disappointed. Giving a more optimistic account than the others, he speaks – again bringing out the most dire of postcolonial clichés – of “indomitable spirits” and “a zest for life” and “teachers doing their best” and of how, “with the little people have, they try to do something.” He creates a portrait of scholastic opportunity frustrated by bureaucratic mismanagement, by plutocratic misallocation. After the three have given their speeches, every circuit of infuriation I possess surges hotly. In scenarios like these, it is more instructive to notice the group dynamics, the position of the speakers, and what the interaction tells us about it all. The most reckless ear will pick up the signals: audience members thrilled by their vicarious participation in this cause célèbre; their self-righteous sighing; their enthusiastic cheering; their greasy, mechanistic chants of “yes”. This event is in fact a catharsis machine for liberal whites, most of whom, having exorcised the phantasm of their structural implicated-ness, will go on to be sighted the following day slurping peach and fennel-flavoured ice-cream cones at the Biscuit Mill, then stopping at Spar en route home to buy some Lucky Star pilchards for the maid.

The blackness of our three speakers tonight is utterly paramount. It is hardly relevant that tonight’s crowd is among the most graciously textured I have seen at literary events. Each has their own motive for attendance, and while not all motives are greasy, the static condition of structural oppression in this country means that there is more performance than anything else going on here. Notice how when Magona slips into vernacular, the crowd vibrates with energetic applause – she is their chosen and legitimated conduit. Her “native” tongue is the invocation of a black authenticity, her mouth is ventriloquising the gospel of the Real. Never mind the fact that she has said absolutely nothing of any analytic value whatsoever; nor has she or her peers said anything that cliché could not confirm without experience. When Magona gets her tiresome demagoguery on for the second time, she starts saying, “We need to start coming together! We must be klaar moeg already. We must be first and foremost proud South Africans who must do what is good for their country. We need to start sharing these secrets.” This perennial deployment of a mythic “we”, were it spoken by any one else, and to mark the mental elephantiasis in the room explicitly, were it spoken by a white academic, would be immediately ripped into at the first available moment: who is this “we”, exactly? “We” is not a suturing kit, a collective pronoun that enmeshes multiplicities through its mere recital.

If this strikes you roguish and insubordinate, let me continue – there are clues lurking throughout tonight’s presentation. Firstly, all this talk about broken buildings and busted toilets and misspent money and the impossible heroism of the rural poor bravely holding out within its tortuous province, is flattening all the complexity of this situation. It is preventing us from recognising the symptomatic quality of institutional failure, the limits of community intervention, and the necessity of a radical or anarchic politics – not a group therapy sesh of quietly enraged liberals with short memory spans – in truly solving this problem. During the question session, a woman refers to this as “the darkest moment of our history”. Yes, because Sharpeville, to take one example, is made just gently penumbral by contrast.

Things become quite interesting when Gavin Stuart, editor of the Daily Dispatch in East London, offers his opinion: “There are 6,500 schools, in round numbers, and something like 65, 000 teachers. Multiply this number by thirty, and you get the number of learners: close to 2 million. The problem is that the malaise runs far deeper and wider than buildings.” He cites a much bleaker picture of uniformed children not attending classes, teaching not being done, “terrifying” absentee rates, lack of support from district officers, unfilled posts. He continues: “Dozens of new schools have been built since 1994. Some are furnished, others have been hopelessly vandalised… the buildings are only one fine layer of a much deeper sickness.”

But just after Stuart finishes, this much needed dose of facts and figures into the reigning and impossible idealism which is the whole atmosphere of this talk, there is a pregnant pause in which it seems like no one is going to applaud him, the way they’ve applauded – whether as a matter of form or appreciation – all the speakers tonight, and even the two questions that have been asked so far. I experienced it first, and now can replay that moment endlessly on my hardware to confirm a suspicion: that because Stuart is a white-guy, not an appointed spokesman of poor, and because he’s threatened to pinprick this helium-filled balloon of cliché, there is a hesitation about whether it’s okay to clap for him (eventually they do, but it’s much more restrained than some of the other rumbling gestures of tribute I’ve heard so far). Ndebele’s response to this is among other things, to say that we need to “Make sure the teachers are employed, make sure the teachers abide by their codes of conduct.” He admits “it’s a very complex thing. It takes a long time of social investment.” And then, now that there is some marginal space for darker truths to bloom, he tells an anecdote of a staff room he visited in which undistributed textbooks were piled high and teachers were ironing clothes in the corner.

There is no persuasion in this evening for me. I don’t see people reporting facts, because that could be done by literally anyone. Instead, I see performance and interpellation of an unhealthy variety. I am not, to dissuade my antagonists, saying that speaking about poverty is a problem. I’m saying that how we speak about poverty is as important as the reportage itself. Perhaps, it takes an especially cynical lens to see this event the way I have, but it takes the same lens to see that platitudes don’t fix material absences, and that the audience dynamics have a great deal to tell us about the state of our laughable bourgeoisie.

READ MORE:
It’s not a democracy if our children aren’t equal - by Pierre de Vos