“I Write Exactly What I Want To Write About” 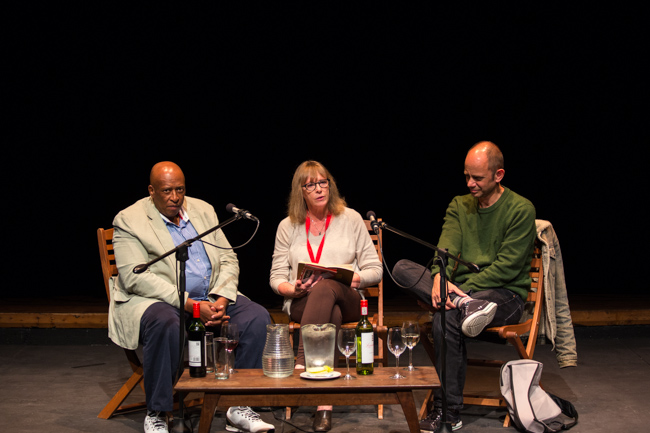 It is a truth universally acknowledged that South African writers are not able to escape their inherited context. Either they are renowned for their adept handling of what is all around considered to be a fraught and still-healing history of political tyranny and injustice, or should they choose to write something utterly different, detached and new, they will inevitably find themselves, as acclaimed writers Zakes Mda (Heart of Redness, Cion) and Damon Galgut (Artic Summer) do today, on a panel talking back to their choice not to focus specifically on their country.

Discussing Galgut's new novel Artic Summer set in E.M. Forster's England, and Mda's novel 2007 Cion, set in Ohio, the setting is not what you'd expect from two writers who had lived through Apartheid, but this is exactly the point. Chaired by renowned publisher Alison Lowry, the three of them explore what is outside the known experience of South Africa; whether distance allows one to shine a different light on our own circumstance; and if the South African perspective is useful or unique abroad. As Mda stated, “I write regardless... I'm not determined by critics... I write what stories tell me to write about... because something told me, ‘Hey! I'm a story! Come and write me.’” For Galgut, though it is important that one doesn't ignore the past, there is a certain freedom now to the topics South Africans can write about in good conscience. “Writing a love story under apartheid would have been an immoral thing to do,” he says, but now writers have more liberty with regard to topic choice. It is a discipline which gets harder as you age, says Galgut, and being first published at the age of eighteen is in a prime position to comment, because “you didn't know [then] it was difficult.”

In terms of subject matter, each writer cites his “curiosity” as the primary impetus for any story. Galgut identifies that there are some things he shares with his protagonist, the experience of growing up as a gay man, for one – “If I didn't share some things there'd be no point in embarking,” he says – but as for his setting, he navigates the racial politics of the British empire. As a South African writer, it allows him uniquely South African insight, especially with regard to race. Mda, whose eyes widen alarmingly to emphasise his point, agrees: “I am not of the school Write What You Know. Write what you do not know... use what you know to write about what you do not know. Explore what is outside of your experience.” And this could apply, as Galgut says, to the people who live down the road from you, as was the case for the Americans, learning for the first time about their fellow countrymen (the WIN people of Mda's Cion), and that from a South African. In Galgut's words, “You can't assume because it's closer to home that it's going to be familiar.” Lowry pauses to contest the limit as to “how far you can put yourself 'out there,'” with an amusing anecdote about a 16-year-old attempting to publish her novel about Hollywood from her limited Johannesburg high-school perspective.

As the session changes pace to open for the floor, there is a naked moment beneath the bulbs of the Fugard Studio which allows one the opportunity to look at the writers, as they squint baldly into the audience to try and spot their interlocutors behind the glare. There is the unique sense of having been lucky to encounter in person (not via his active Twitter feed) the Entish voice and expressive eyes of Mda's storyteller, and also to have glimpsed the social-media-shy Galgut, who, uncomfortable in the spotlight, explains apologetically, “This is not where I'd choose to spend a Friday evening,” amending amicably, “though I'm sure you're all lovely people!”

To end the evening, as a final question, before the full hour is finally closed, the last comment asks Mda whether he views himself as avant-garde. Slowly gaining momentum in a speech that I thoroughly enjoyed, he responded, “I would rather create art, you see? And then leave it to you,” he adds meaningfully, amidst our chuckling, “to look at my work, and then answer the question. You see? It is your job, man – don't ask me to do your job! It is your job, as a scholar, an academic, to take that paper, and look at it, and say... this is avant-garde.”

The choice, then, is completely open to you.