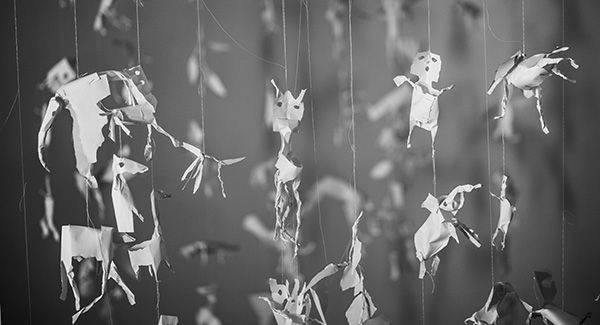 In an interview with Francis Galloway on Litnet, Breyten Breytenbach explained why he and the other organisers had decided that the first conversation of the Dancing in Other Words festival should be on translation. He gave several reasons. First, because of the variety of the participants’ home languages, most of the proceedings will take place in a translated form, in English. Second, as far as the translation of poems is concerned, there is one question especially that the translator has to ask her- or himself: should a translation remain faithful to the original poem, or should it be considered a new, autonomous, poem?

Breytenbach’s list is deceptively concise, as each of these two topics could act as a spark and lead thoughts in various directions. This is what in fact happened during Conversation I (titled “Lost in translation, found in poetry”). During the Q & A of Conversation III, the moderator of Conversation I, Gunther Pakendorf, commented that at future festivals the topics of the conversations should perhaps be less broad and open-ended. Breytenbach apologised for the vagueness of the topics at the start of Conversation IV but commented that the Zen theme of that particular event (“Is there a South African way to the great Nowhere?”) at least presupposes that no conclusion will be reached.

It could, however, be argued that the ever-expanding opening up of a plurality of voices is one of the reasons for the existence of translation, and that it is therefore fitting that that is also how Conversation I progressed: with the opening up of possibilities without conclusions being reached. That does make it difficult to gather the various strands of the conversation into a short report. The report is therefore divided into three sections: “Shop Talk”, “The Ethical Considerations of the Translator” and “The Ethical Value of Translation”. 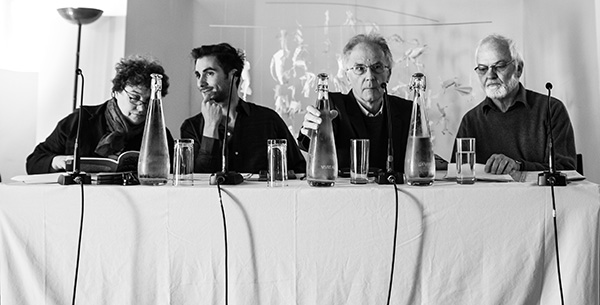 In the programme, the conversation was subtitled “A master class in translation”, and the poets did discuss their experience of translating and the strategies and methods they use to go about it. They were given the task of translating either “This be the Verse” by Philip Larkin and/or “In Memoriam Ben Zwane” by Wopko Jensma into their respective languages. Participating in the discussion were Marlene van Niekerk, Israeli-Italian translator and poet André Naffis-Sahely and Slovenian poet Tomaž Šalamun.

Van Niekerk was first to speak and explained that it was difficult to fulfill the brief in the short time they were given. She usually takes months to compose various versions of (a translation of) a poem and she has to wait patiently for Fred (her pet name for the unconscious) to open up and let everything fall into place. During the “poetry caravan”, which all the poets participated in during the weeks leading up to the festival, they did not get a lot of time to write, and when she did attempt to translate “This be the Verse” she was usually tipsy, opening her laptop and saying “Jesus, what rhymes on fuck? ” i (sic).

The time limit was also one of the reasons Naffis-Sahely gave for not producing any translations. The other reasons are that he usually translates into English, not from it. He likes to immerse himself completely in the world of the poet before attempting a translation and he did not have the time to do this. Van Niekerk added that Naffis-Sahely joked to her that French is too elegant a language to accommodate the sentiments of either poem.

Šalamun read his Slovenian translation of “This be the Verse” but explained that he too found it difficult to translate the poem because he also usually takes a long time to translate. When he writes his own poems he writes quickly and intuitively and when he translates he wants to do the same thing, starting out with an intuitive first draft but then taking a long time editing it. He also found it difficult because the word “fuck” is, according to him, much more taboo and “barbaric” in Slovenian than in English, so that the tone of his translation is slightly different from that of the original. This brings us to the second main topic of the conversation: how close should the translator stay to the original poem?

Ethical Considerations of the Translator

Most of the poets agreed that a translation is in fact a new poem. I would argue that this statement should consider that translations exist on a continuum with regards to their loyalty to original texts. Van Niekerk, for instance, produced two different translations of “This be the Verse”, of which one was fairly faithful to the original, whereas the other was written in a Cape dialect. She said that one could even consider creating a more or less Dietse language and translating the poem to that. She therefore seems to see an original more as an inspiration or departure point for the creation of a new poem.

Šalamun, on the other hand, started by stating that he is in favour of faithful and literal translations, but added that the message is most important, and that it can be located somewhere else in the translated poem from where it was in the original poem. In that way it is like a “traveling womb”. Naffis-Sahely retorted that the idea that a literal translation is possible presupposes the existence of parallel cultures, but that in reality the relationship between cultures and languages is not that simple. From the audience he called British poet Bill Dodd to read his Italian translation of “This be the Verse”. In Larkin’s original poem the third stanza starts with the lines “Man hands on misery to man. / It deepens like a coastal shelf.” Unable to translate these lines, Dodd replaced them with a joke about “breeding like rabbits”. Naffis-Sahely considers this a good translation because he thinks this sexual innuendo will appeal to an Italian audience. Van Niekerk teasingly asked him whether he is saying something essentialising about Italians, to which he replied that he is only making an observation about their literary traditions.

Pakendorf questioned whether Dodd’s translation is good (and ethically justifiable) because it changes the meaning of the poem from what Larkin intended. Van Niekerk answered by asking how anyone can know what the original poet intended – she refers to the theories put forward in Art and Agency (1998) by Alfred Gell. Again Šalamun disagreed, saying that the translator has to remove his own ego from the translation.

During the Q&A session after the discussion, two comments from the audience related to this topic. The Chinese poet Yang Lian said that translations aren’t cuttings attached to a tree, but a new tree completely. He only questioned whether a translator shouldn’t then rather put his own name to the poem, rather than implicating the original poet. I think that it would probably, in that case, be advisable that the inspiration for the new “poem” is still indicated somewhere, so that plagiarism isn’t suspected.

Lastly Andries Bezuidenhout contributed to a an impassioned debate about the use of footnotes (the poets on the stage were in favour of the idea, while in the audience Leon de Kock argued that it is a cop out), by saying that when he is reading he prefers notes and, for instance, the placement of the original poem next to the translation, so that he can understand the original poem as much as possible. This brings us back to Van Niekerk’s two different versions of “This be the Verse”, and the different functions of translations. Some translations are new independent poems reflecting, and inspired by, the spirit of the original, while others act more as explanations and carriers of knowledge. Most, I suppose, lie somewhere in the middle of these extremes. As Naffis-Sahely claimed, any translation is better than none, because it will hopefully be the spark that leads to other translations. The ideal would be many different translations of the same poem, so that the reader is free to compare them.

The Ethical Value of Translation

Pakendorf questioned why none of the poets chose to translate Jensma’s poem by asking whether it is perhaps untranslatable (presumably because it is written in a township dialect). Naffis-Sahely gave the same reason for not translating Jensma as he did for not translating Larkin: he did not have time to learn enough about the poet and the context in which the poem was written. For his part Šalamun said that he did try to translate it, but found it difficult because Slovenian is a rural language and does not have equivalent versions of the urban slang and dialect of the poem. Van Niekerk came the closest to agreeing with Pakendorf when she commented that Jensma’s poem is already a kind of translation because it combines Township and American Jazz slang.

Naffis-Sahely said that somewhere in the world a like-minded person would be able to translate Jensma’s poem. He added that this was the appeal of translations: even with all the different forms of communications available today, it is still difficult to find someone who shares your thoughts. Translation improves your chances of finding such person or body of thought. According to him, therefore, a unique figure such as Jensma would be ideal for translation, or as the subject of a biography or film.

On the uniqueness of Jensmaii, Pakendorf praised him as a true hybrid, and claimed that in Bakhtinian terms his work “out-carnivals the carnivalesque”. Van Niekerk added that after the transitional post-Apartheid years, ideologies are stabilising once again and to insert a figure like Jensma into the public discourse (whether through translation or another means) would “rinse” South Africa. The term “stabilising ideologies” reminded me of Willem Anker’s article on Litnet “‘Spanner in die wat?’ – Wopko Jensma en die mineurletterkunde van Deleuze en Guattari” in which he argues that Jensma’s poetry functions as a type of minor literature, capable of “deterretorialising” or destabilising dominant ideological structures.

Reading the comments now, it also makes me think of Breytenbach’s comments during Conversation IV that to reach “Nowhere” (representing true freedom for the Buddhist) the individual often needs a guide who is passing on their consciousness from somewhere else. As examples of these guides he mentions philosopher Martin Versfeld and poet Petra Müller, and I would like to contend that Wopko Jensma could also be considered such a guide.

The Dancing in Other Words festival feels like one of the most meaningful literary events I have yet attended. One can’t help, however, sharing the frustrations Antjie Krog articulated during Conversation II (“What has ethics got to do with it?”). She mourned the lack of respect for translation in South Africa. According to her it is one of the reasons that the different cultural groups in our country still don’t understand one another, and that we as a nation are unable to formulate a shared ethics. During Conversation I, journalist and blogger, Victor Dlamini, also commented that South Africa’s powerful people do not recognise the value of our rich diversity of languages. He also said that South African English writers’ failure to recognise the value of patois limits their appeal, but that is a subject for another article. To substantiate her argument Krog mentioned Marlene van Niekerk’s play, Die Kortstondige Raklewe van Anastasia W., which according to her has the power to transform South Africa but which has not been translated and which disappeared after a few performances. I only hope that the influence of this festival is not short-lived and that the questions it raised reaches beyond its international guests, Stellenbosch intelligentsia and the Afrikaans literary community.

i “This be the Verse” starts: “They fuck you up, your mum and dad”.

ii To learn more about the intriguing life and work of Wopko Jensma, see his biography on South African History Online, and Ayub Sheik’s doctoral thesis Wopko Jensma: A Monograph.