The shining girl of SA lit 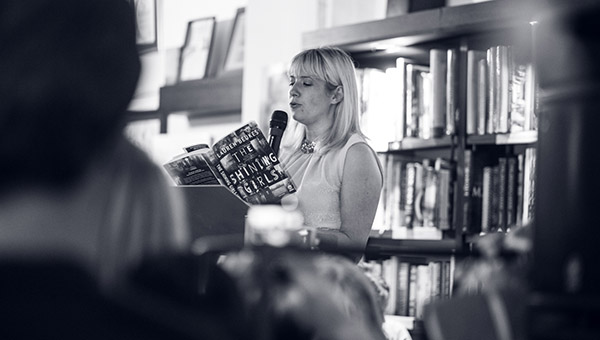 Mervyn Sloman, owner of The Book Lounge, claims that he has never seen a local publisher get behind a book like Umuzi has done in their support of Lauren Beukes’s new novel, The Shining Girls. He was speaking at the book’s launch last week.

The same could be said of the Lounge itself; their dedication to the book could be seen in the creative details at the event. The shop was decorated with creepy crime-scene investigation-style photos Beukes took while doing research for the book, as well as small toys, connected to the ceiling and to each other with red wool.

The Shining Girls is about a time-traveling serial-killer (an idea that, according to the author, started as a joke on Twitter). Its main setting is 1930’s Chicago, and it is this era that apparently inspired the theme of the launch, with burlesque dancers (also a reference to a character in the novel) and jazz and swing music setting the scene. A trailer for the book was also projected onto the wall. All of this created a suitable atmosphere for the packed audience to appreciate Beukes’s reading from the novel.

The reason for all this fanfare was not only to be inferred from the large (and initially noisy) crowd, but was also explicitly stated by Sloman: “The Beukes” is a big deal, a real literary celebrity, something which is not in great supply in South Africa. Referring to her various successes Sloman said that it is always cool when somebody nice and deserving “makes it”.

After her reading, Beukes gave a speech based on the concept of “ten things you might not know about The Shining Girls”. She referred to previous drafts of the novel, when it was called The Killing Time and was about a writer, Edwyn Baker, who starts killing his assistants when they get too nosy.

On that macabre note Beukes thanked her research assistants who, according to her, even brought her information that she didn’t specifically ask for but that made it into the book, for example the true story of the “glow girl”, a dancer who performed covered in radium paint. 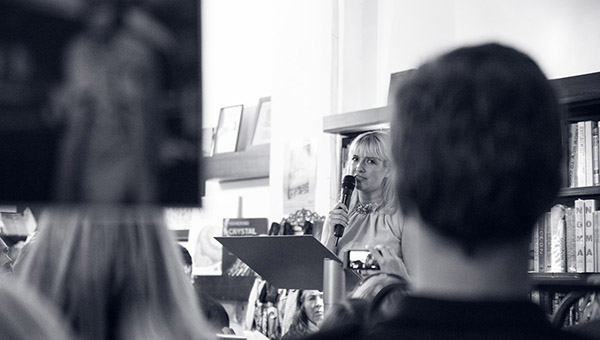 Next, Beukes explained why The Shining Girls, in contrast to her previous two novels, is not set in South Africa. She wanted to write about the way in which the world changed during the 20th century. Setting the novel in South Africa inevitable would have meant a focus on Apartheid, a topic she did not specifically want to explore. She decided on Chicago because she had previously lived there for a year, and because she found the city similar enough to South Africa (in its corruption, violence and history of racial segregation) to enable her to write about it convincingly. After writing the novel she found out that the National Party had actually sent investigators to Chicago to get tips on racial segregation.

As implied by Beukes’s reluctance to write about Apartheid, however, race is not the main focus of the narrative. Rather, the novel deals more with gender, and Beukes explores the concept of the female as victim and how it has persisted through history. All of the victims of Harper, her anti-hero, are women, and their stories are told from their perspective. The title of the novel refers to what Harper calls his victims. According to Beukes, “shining girls” are the women who, in each era and society, are strong and deviant in their approach to the structures that are imposed on them.

Beukes ended her speech by saying that it was difficult writing about a person as despicable as Harper, and as a result she “fucked him up” and injured him as much as she could, which made it difficult to keep track of which injuries belonged to which time-line in the novel. She resorted to constructing large diagrams mapping out the movements in time and space of the crimes in the novel, which she organized using black and red wool.

As a result, she herself became a bit of a “serial killer type”. 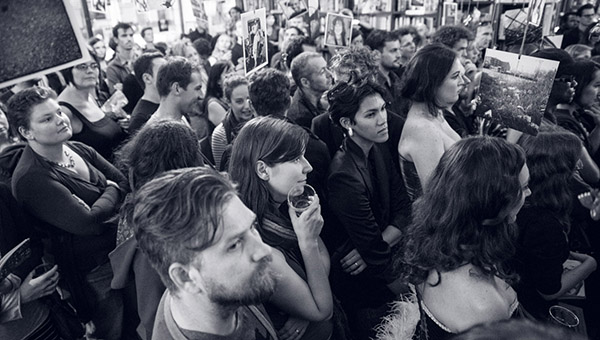