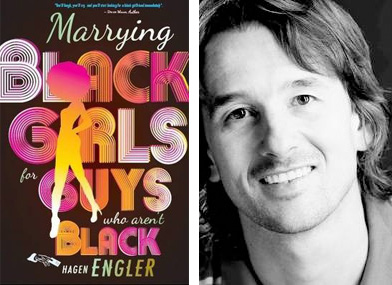 This review first appeared in the Cape Times, Friday 24 January 2014.

In Marrying black girls for guys who aren’t black, Engler narrates the story of his relationship with Baby, aka Nomfundo, in an informal, frank and unapologetic manner. Along the way, he shares all the confusion and insights that their interracial marriage has led to.

In a word, the book is refreshing, despite the well-established South African tradition of using interracial love as a springboard to talk about general race relationships – probably because Engler steers clear of trying to be politically correct. Rather than prancing around the political, he bites right into it, laying out our history of colonialism, persistent systematic racism and the generational legacies of apartheid. He helps to render whiteness visible, pointing to its privilege and its disconnect from Africa, and identifies key aspects of what he calls “white culture”: crap tattoos, Carte Blanche, shorts, extreme sports, the Democratic Alliance, and so on.

And yet, despite Engler's self-confessed whiteness, he almost never comes across as a typical liberal who attempts to solve all our problems in one swoop. He acknowledges that his marriage hasn’t made him a de facto authority on blackness in a country where the fictitious notion of race has led to particularly large gaps between races. Rather, he says, we are all in a state of “racist rehab”, trying to rid ourselves of our addiction to prejudice.

Part of this rehab entails telling our own stories, which is precisely what Engler does: he tells us how he met Baby at a kwaito gig in Newtown; how he proposed one morning, without pants, by throwing a paper bag containing the ring onto their bed; how he learnt about the importance of lobola negotiations in getting to know one’s in-laws; and how he has had to renegotiate the notion of race after their son’s birth. This personal narrative is interspersed with tips for whiteys looking to pick up black girls; a particularly enjoyable open letter selling whiteboys to black women; and tidbits about everything from the importance of BEE to the intricacies of black hair.

At times Engler even performs his whiteness, choosing rap as his vehicle. It is precisely his self-aware perspective and tendency to self-ridicule that enables him to address the kinds of issues which we usually prefer to avoid. He uses both comedy and sincere self-questioning to disarm, to lure, to sway.

One blind spot which Engler acknowledges is his representation of women. In a later chapter, entitled “The other struggle”, he shares the insights he has gained about how FHM, rather than simply celebrating women, distorts our conception of beauty and denies women their subjectivity by reducing them to consumable objects. He blames his past bigotry on having been “brandwashed”. And yet his wife’s silence throughout the book and his continued obsession with looks show us that past ways influence and perhaps even limit present ways of seeing, and therefore how we act and interact with each other, whether it be as people of different genders or races.

Despite this reservation, Engler must be commended for his contribution to the growing archive of ways in which we are re-imagining ourselves as South Africans (also see the recent Categories of Persons, edited by Jones and Dlamini). He shows us what we’ve known all along – that culture is not static, but malleable, and that new categories of persons come into being whenever different cultures meet. Hence his keenness to force us whites out of our comfort zones into spaces where we are not in an artificially created majority, so we can realise how min whiteys there really are in Africa and the importance of embracing our shared Africanness in order to grow this country collectively.