Decoding and reconstructing the self 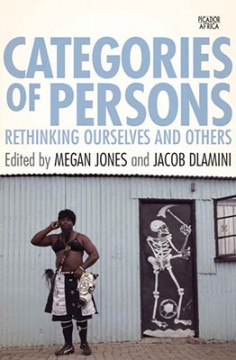 Categories of Persons: Rethinking Ourselves and Others, Ed. Megan Jones and Jacob Dlamini, Pan Macmillan, 2013.

Categories of Persons is a thought-provoking collection of essays that challenges the construction of and engagement with a wide range of socio-economic and racial categories pertaining to South African identities.

The title simultaneously evokes a history of rigid categorisation, as imposed by the apartheid state, and the construction of the current constitution that attempts to move away from this.

The collection opens with a foreword from Njabulo Ndebele that frames the collective subject matter. According to Ndebele, identities are fluid and in constant re-definition. He argues that “right now, ‘to be’ in South Africa is to take up the historical imperative ‘to become’”, and that this necessitates a constant redressing of the many categories South Africans are grouped into. Subsequently, Ndebele asks whether it is possible to experience oneself in other people yet retain “the real sense” of oneself. That is, are categories only insular, or can their boundaries be crossed? And if so, how does one do this within relation to a grounded sense of your individuality?

Jones’s article, the best in the collection, captures this sense of engagement in her jocular sketch of being a young professional white woman without a car, and therefore dependent on public transport. According to Jones, the general concern of colleagues, friends and family is that the practice is unsafe, and the risk of racial or sexual assault is high. Yet Jones’s telling of the difference in taxi travel “etiquette” in Johannesburg compared to Cape Town (the difference in who to pay for your ride or how to disembark correctly), deconstructs the categories that operate in our day-to-day life and demonstrates how one can “intervene in our own stereotypes” and resist them. Jones’s space of the moving taxi aptly encapsulates Ndebele’s concept of fluid identities, of the individual in confrontation with the many categories of persons, of how they interact, and transcend their boundaries.

The other contributions, also presented through the lens of the personal, offer equal confrontations with – often racial – stereotypes and assumptions. Neels Blom tells of a random meeting in a bar with a racist inhabitant of a small town in the platteland, while Antjie Krog describes visceral memories of the Anglo Boer war as filtered down through familial generations, and compares them with equal memories of suffering disclosed in the TRC hearings. Other contributions such as Antony Kaminju’s “Theatrics of the Soccer Fan” offer a slightly more nuanced exploration of categories. Kaminju’s article follows the largely patriarchal space of fanatic supporters of soccer teams and the blurred boundaries between prevalent masculine performances and their donning of female lingerie as an appropriation of dominance: their club as the mother of all soccer clubs and therefore superior. Riaan Oppelt writes on musical stereotypes associated with coloured teenagers, while Kopano Ratele offers a Fanon-esque account of fathering a black child who cannot speak isiXhosa.

Admittedly, Categories of Persons suffers from the unevenness common to multi-author anthologies: some contributions are written better than others, if only when read as singular pieces of writing or independent articles, and I’d struggle to see the relevance for Karen Lazar’s piece on the after-effects of her stroke if it weren’t for the introductory blurb. That said, and somewhat contradictorily, I wonder whether each chapter needs to be introduced in equal fashion as the impact of the collection truly lies in the juxtaposition of the intimate accounts of categories in the quotidian. Categories of Persons offers, in its adjacent placing of a multitude of experiences from a dynamic range of lenses, an insightful exploration of the multi-cultural and multi-existential complexities of contemporary South African identities.

It is a stimulating read that needles the reader to reflect on similar instances of categorical experiences, to decode and reconstruct.