An ethics of body and otherness 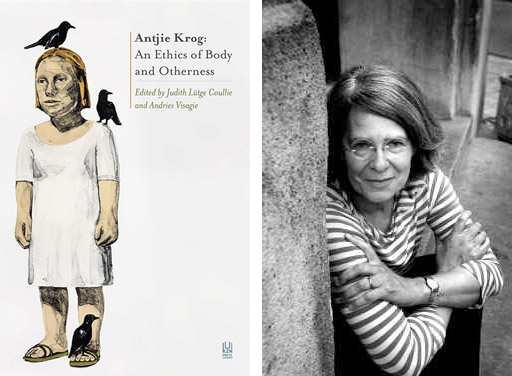 For many South Africans Antjie Krog is a household name – her place in the bookshelf as established as Shakespeare was in so many bookshelves for so many years. But Krog carries with her a sobering element, for much of her writing is based, at least in part, on reality which encloses a kind of truth – theirs, mine, yours, ours. But truth, as we all know, is a burning bush, and if it burns with heaven’s ecstasies, it is only so because it is laced with hell’s finest cocaine. This is the ‘white heat’ of her work, described by Andries Visagie in the preface. He writes, quoting the narrator in J.M. Coetzee’s Diary of a bad year: “Her theme is a large one: historical experience in the South Africa of her lifetime. Her capacities as a poet have grown in response to the challenge, refusing to be dwarfed. Utter sincerity backed with an acute, feminine intelligence, and a body of heart-rending experience to draw upon.” But collections on Krog’s oeuvre have hitherto been published as a body of work only in Afrikaans anthologies. And it is for this reason that Antjie Krog: an ethics of body and otherness was created: to bring together a book of critical essays in English, intended chiefly for an academic audience.

To understand Krog it is necessary to take a step back into history. She first caused a stir in 1970 when poems of hers advocating “solidarity between white and black South Africans” appeared in a school publication. But the uproar effected the opposite of what it perhaps intended: instead of Krog retreating, she set out on a path of controversy; perhaps, like many other writers, to make sense of the senseless.

It was particularly the publication of Country of my skull which brought together narrations of personal and public memory in an attempt to understand the senseless, weaving together Krog’s personal history and a number of the testimonies presented to the TRC (Truth and Reconciliation Commission). With regards to this book, Coullie considers the role of memory in the creation of a national identity, but explains that all memories are not equal: “The past is not retained in memory intact or in toto.” Memory is selective, and it changes over time. Moreover, it is presented differently in private spaces than it is in public ones. It is the forgetting of one thing to allow for the remembrance of another; the selecting of that which allows for narration, allows for a sense of meaning. And in this case, the “goal of the Commission and of Krog and the other TRC memoirists is for collective memory to inform the ways in which individual members of the fledgling nation recollect the past” so that they might move forward as one nation. It is, in a sense, a contrived project, one which Krog is cognisant of. “No poetry should come from this”, she writes, all too aware of the thin line between heaven and hell. “If I write this, I exploit and betray. If I don’t, I die” (Krog 1998: 48). This, then, is the ethical challenge woven into the different chapters of the book: an ethics of infidelity as Kim Rostan terms it in the second chapter.

With the focus still on Country of my skull, Rostan explores Krog’s “passion for her larger community beyond her family” and how Krog searches for the borders of this community through her “narrative collage”. Such narrative collage may be said to be reflective of the way in which memory works: as patchwork, “the cutting and pasting” that creates the object on the border of fiction and non-fiction – creative non-fiction, as it has been called. Such reworking, Rostan argues, “produces a profound ethical concern for the other beyond the simple attempt to quote faithfully.” It is simultaneously a detextualisation and a retextualisation: “traces of events that resist naming and knowing”, thus resisting fidelity to a truth, or rather, to the constructing of Truth.

In the third chapter, Susan Speary, a Canadian academic, speaks of her experience in teaching Krog to students who “relate to the apartheid era as a historical period that only barely shaded into their own lifetimes, if it did so at all.” It is a unique chapter content and one which I found illuminating even for my own teaching of Krog’s work, especially in terms of how “our ethical sensibilities and affective capacities” come into play in the lecturing hall.

Anthea Garman’s chapter, “Antjie Krog and the accumulation of ‘media meta-capital’” investigates Krog’s “political credentials as a dissident Afrikaner.” Drawing on Pierre Bourdieu’s work, she sets out to show how Krog’s work has allowed her “to accumulate significant cultural, economic and symbolic capital as a literary figure.” While the chapter is lively, I find it curious that academics aren’t more sceptical of literature being equated to capital. This occurs too in the work of Pascale Casanova who is quick to talk about the literary capital accumulated when translation takes place from “small languages” into assimilating ones. What is lacking here is an interrogation of the material and politico-ideological affects of the capitalist axiomatic, even in literature. Still, Garman does show how Krog’s work has become ‘legitimised’ over the years, allowing her to become socially relevant.

Louise Viljoen contributes the next two chapters in this anthology, moving towards an ethics of body and emphasising Krog’s poetry “as material body” and “the use of bodily imagery … particularly the female body” as an important thematic recursion in Krog’s oeuvre. Specifically she looks at “representations of the body as grotesque, monstrous and abject”, as well as more conventional representations of the body in order to determine the extent to which “such representations constitute a so-called politics of the body”. Looking at how Krog uses different portrayals of the body in her poetry, Viljoen explores how Krog’s creativity accrues over the years, allowing her “to liberate herself from the ‘enforced shame’” associated with bodily processes. Viljoen’s incisive feminist commentary serves to highlight the political potentiality in Krog’s representations of distorted female bodies: how such “representations undermine the way in which the ‘official culture’ of her time (as embodied in the state, the church, educational institutions, community norms and aesthetic canons) constructs the female body.” Grounded in theories of Kristeva, Braidotti and Grosz in particular, Viljoen shows how subversive representations may become a political tool.

Other contributions to the anthology by Frances Vosloo, Christy Weyer, Andries Visagie, Ileana Dimitriu and Dan Wylie further create a platform for critical engagement relating to, and informed by, Krog’s oeuvre. It is a timely contribution, and one which offers valuable contributions and insights into Krog’s oeuvre.