The conversation about Johannesburg continued in the first session after lunch on Saturday, many people buoyed by the delicious buffet arrayed by Gramadoelas Restaurant – itself a Joburg institution, established almost fifty years ago.

It seemed appropriate to follow a session which considered ways of “reading the city” (see report on session 6) with one which, as Corina van der Spoel suggested in her introduction, would focus on ways of “writing the city into being”.

The 71 members of the audience (according to Eric Miyeni, who kept a running count) faced a panel of five accomplished writers who imagine the city in different ways in their novels. The stage set for Athol Fugard’s Blue Iris, to be performed later in the Laager theatre, was subtly evocative of the writing act itself, with often illegible lines of prose etched onto a journal page.

Matthew Wilhelm-Solomon, the panel chair, who is a researcher at the African Centre for Migration studies at Wits University, proposed that the city consists of a series of encounters between the often conflicting or parallel visions proffered by prophets, commercial entities, religion and literature. While writers such as the late Phaswane Mpe, Mongane Wally Serote, Lauren Beukes and Ivan Vladislavić write “portraits of places”, the novels by the panelists differ in that the city “appears spectrally” – it is a “failed vision of the city” which haunts the texts. 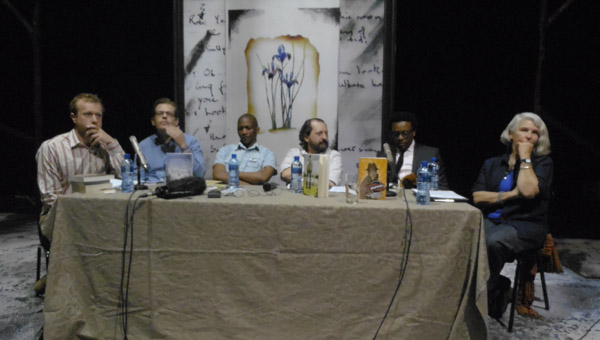 Wilhelm-Solomon had creatively requested that the panelists choose to display artifacts which symbolise or represent their encounter with the city or inspire them to write about it. Unfortunately only Kruger adhered to this, but the other writers did describe their writing process in engaging and often humorous anecdotes, in addition to reading extracts from their work.

Craig Higginson is the literary manager of the Market Theatre, and his latest novel, The Landscape Painter, was awarded the 2012 UJ Prize. Higginson’s first job had been for Johannesburg Water, and he recalled being stationed at sewage plants with “tons of shit passing by – and I had to make sense of it!”

This scatological encounter - and metaphor for the writing process – was accompanied by necessary research of early city engineers’ reports which revealed that the “carnivalesque” identity of the city was inscribed in early Joburg. Higginson dismissed any notion of “trying to represent Joburg in a holistic way”; instead he attempts to “write [his] way into that imaginary time and place”.

Mahala, who hails from the Eastern Cape, admitted that he was “disappointed with the city” when he arrived in 2002, as it failed to live up to the imaginary Johannesburg he conjured through literature he’d read. As an act of resistance, he returned to and sought solace in old texts of the 1950s, especially Can Themba’s writing, which inspired his collected African Delights.

Kruger’s "show and tell" display consisted of Abe Berry’s Sketches of Johannesburg (1982) and a portrait taken by a street photographer of his parents, capturing a similar era to Themba’s. His parents had been farmers, newly arrived in the city and the image inspired him to consider “what it means to be in a city”, recreating the post-World War II era that is the context for his novel, Die Twee Lewens van Dieter Ondracek. The protagonist was conscripted into working for the Nazis on the railway transports and attempts to create a new identity for himself in Melville to escape the haunting of his past.

Miyeni confessed that although he is inspired by the city, he can’t “write in Joburg” – “it’s too noisy” and there are too many distractions. He continued that he “had no thoughts of Joburg at all when he wrote”. His intention with his novel, The Release, was to convey the idea that “as a country we should unleash our true potential”. The extract he read – chosen “because it has the name of a suburb in it, Soweto” – was a kind of litany of those whose spirits have been crushed by the exigencies of city life.

Jane Rosenthal is the Mail & Guardian’s “longest-serving book critic” and an author in her own right, chronicling life in Yeoville in the 1990s. However, instead of reading from her own work, Rosenthal read from Yvonne Vera’s The Stone Virgins. Her chosen piece described the main road in Bulawayo, which acts as an “umbilical cord” connecting that city to Joburg, thus reframing the encounter with the city within the context of a transnational imaginary. We should consider “what Joburg means to the rest of Africa, not just here. It is a city built on migrant labour in the mines.”

Wilhelm-Solomon then asked the panel to consider the meaning of violence, which “permeates the work and history of writing about the city”. Higginson responded that his book is primarily concerned with the varied meanings of representation. He conceded that although there is violence in his novel, “it is not the fundamental quality”, but rather, by imagining a historical Johannesburg, he reveals that this was “always a frightening place”. Mahala mused that although he writes about human tragedy, the Johannesburg he imagines “is not the one that makes headlines”.

Continuing the theme of migrant experiences, Wilhelm-Solomon referred to the “metaphysical violence” suffered by migrants who often experience anxiety caused by displacement from their ancestral homes. Commenting on the choice of ancestral spirits as narrators in some of his stories, Mahala described the ancestral voice as a “moral authority in the book”.

Rosenthal asked Miyeni to comment on the central role of a gun in his novel, and to connect the violence with his contention that he wrote the book to “make a statement” about “unleashing potential”. Miyeni believes that the “psychological violence of South Africa drives the book – physical violence is just symptomatic of that”.

A lively conversation ensued on the role of the writer and the “power of the written word given the commodification of the city”. Miyeni wished that the majority of South Africans weren’t forced to choose between “bread or books”.

An audience member posed a question regarding the boundaries of the city and the impact of these on the imagination. Mahala countered that “there should be no boundaries in the imagination” and cited his creation of a train route between Alexandra and Sandton to solve a protagonist’s transportation problem. Kruger envied Mahala’s liberty as he was constricted by aiming for historical accuracy.

Higginson elaborated that “all cities are divided” but, for example in London, the underground map “pulls the city together”. Joburg’s urban layout is a relic of apartheid planning, but he wanted to imagine the possibilities if the Gautrain’s reach were extended, “if we could move through our city more fluidly, more swiftly”.

As a concluding remark, Wilhelm-Solomon encouraged the writers to consider spaces of the city which have not yet been written about, which do not yet exist in the “fictive imaginary”.

The manifold stories of this haunted landscape continue to whisper through the streets, waiting for a receptive ear, waiting to fuel the discordant visions of the citizens of this fictional city.