Is the tablet still too hard to swallow for SA readers?

Report on How I stopped worrying and learned to love the tablet: the changing landscape of print, with Nic Dawes (chair), Terry Morris, Verashni Pillay and Ben Williams.
Session 8, Saturday 1 September, Market Theatre. 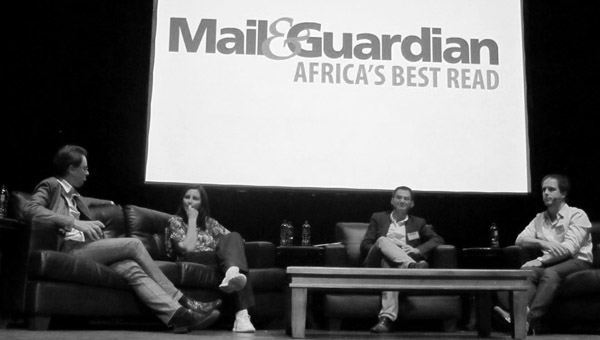 Session 8 of the Mail & Guardian Literary Festival is entitled “How I stopped worrying and learned to love the tablet”. In one sense, the title may suggest that the tablet is a sign of the apocalypse for the printed word, given the session’s reference to the Kubrick film about an impending nuclear holocaust.

However, Nic Dawes, Editor of the Mail &Guardian, who is also the panel chairperson, quickly makes it clear that “the title is completely wrong” – it does not at all represent his feelings about the digitisation of printed text. (That he chairs the session by referring to notes on his iPad serves to confirm this position.) This is generally the attitude of the rest of the panel too, which includes Exclusive Books General Manager Ben Williams, Pan Macmillan Managing Director Terry Morris, and Alistair Fairweather, who is involved in the conversion of the Mail & Guardian into electronic form. 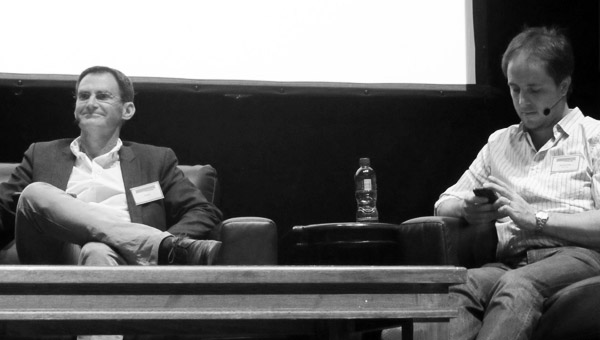 The panel’s enthusiasm for digital media begins with Morris’s claim that the world of digital publication is “a hugely exciting area” and that Pan Macmillan is “actively trying to produce and market” e-books. Williams echoes this excitement for and about e-books. He makes his point even clearer by standing up from his seat, and, much to the amusement of the audience, pulling from the pockets and nooks of his jacket various forms of electronic reading devices: an iPad here, an iPhone there, and perhaps a Kindle, too. This is an act which, quite literally, demonstrates Williams’s perception of electronic reading devices as a trend to which he wholly subscribes.

Morris comments on the popularity of e-books, arguing that, currently, about 3% of Pan Macmillan’s sales can be attributed to e-books, with Mandy Wiener’s Killing Kebble the company’s most sold e-book. This may seem a low figure (especially, as Fairweather assures us, when compared internationally) but it’s a figure which Williams claims is “really good news”.

It seems, then, that South Africans are becoming increasingly accustomed (albeit quite slowly) to the idea of reading books electronically. Later in the conversation, and using himself as an example, Fairweather hints at the possibility of an increase in reading and readership due to the convenience that tablets provide in purchasing and consuming written material.

However, the benefits of tablets and e-books may go beyond the personal. As Fairweather suggests, the production of cheap tablets may have significant pedagogical advantages as school learners’ need to learn may become less dependent on a government’s (in)ability to deliver textbooks. Fairweather warns, though, that while this may prove invaluable to learners and teachers, publishers may suffer from a lack of demand by schools not needing to repurchase textbooks because the old ones have become damaged over time.

Still, the panel agrees that while some South American countries are beginning to implement such ideas, South Africa is still very far from a sophisticated marriage between technology and education. 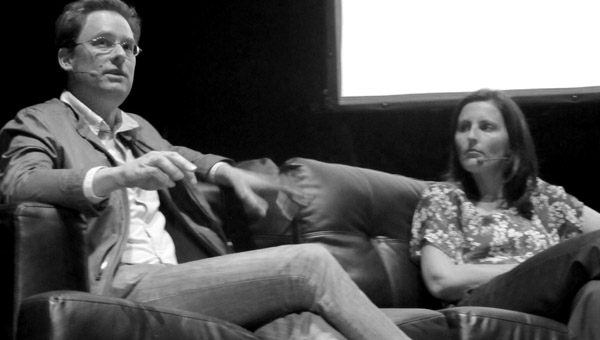 Ben Williams, who unpacked his gadgets for the audience to see, and publisher Terry Morris, who says she is excited about digital publishing

When the floor is opened to the audience, an interesting concern is raised about where authors stand in the world of electronic media. Morris argues that, while not nearly enough e-books are being sold, royalties of e-book purchases are generally higher: 25% for e-book sales compared to 12% for printed works.

Williams says the tablet will not make a difference to writers – the author still faces the same problems, and the full potential of the tablet may allow writers to engage with a different kind of creativity. Dawes adds that graphic novelists and authors of children’s books are finding the tablet a creatively fulfilling space for their works, since they rely on text and pictures in equal measure.

However, perhaps attesting to the potential longevity of the printed word, Morris makes an interesting point by referencing some authors who first publish an e-book on Amazon, and, after achieving success in this medium, quickly move to print. Morris suggests that writers do this simply because print “still has that gravitas”.

Later in the conversation Dawes echoes this point by arguing that one of the disadvantages of storing one’s reading list on a tablet is that the extent of one’s library becomes invisible to the people we want to impress – the situation might arise that all we have to show off with is an empty bookshelf. Tablets, then, seem unable to accommodate an intellectual snobbery which may still be de rigeur in literary spheres.

This was a rich and full discussion, with interesting comments by the audience, which was small when compared with many of the other sessions at the festival. I’m not sure what it means to have people at a literary festival seemingly showing a lack of interest in the future of the written word, and largely ignoring such trendy literary devices as Kindles and iPads. Perhaps it suggests that (South African) readers find the tablet a device that remains too hard to swallow. However, the discussion suggested this may not be the case. When an audience member brought up the issue of book piracy in the digital age, the panel seemed to suggest that lovers of books are simply desperate to read, whether the text is in the form of pixel or ink, whether the story is buried in the pages of a book or in the hard drive of a tablet.