Writing into the crops and boundaries 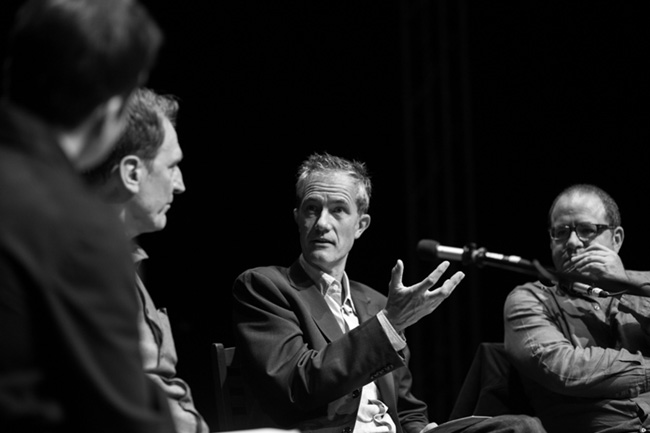 The Homecoming Centre has been transformed into literary paradise, stuffed full with illustrators, writers, artworks and books, so that it's easy to judge from the ebbing and flowing of the people, where to find the most interesting graphic novels, or the best reads. The books of today's three panelists are easy to find, prominent by proliferation, and littered with charmed blurbs. The prospect of a panel hosting Mark Gevisser (Lost and Found in Johannesburg), Ivan Vladislavić (The Loss Library), and Geoff Dyer (Working the Room) promises a combined intellectual clout which later is entirely off-set by the sight of them, comfortably chatting on the stage of the Fugard Studio.

Facilitator Bronwyn Law-Viljoen makes an interesting decision, assured that the audience are long-standing fans, needing no introduction to these writers, by asking them to begin by reading from their books, and from each excerpt there emerges the common motif of the photograph. First Dyer, reading as if from the understated gentleness of thought, mixed with characteristic dry wit, then the rich baritone of Gevisser describing a photograph used in the Drum article “Fringe Country”, and finally Vladislavić, with the faint definition of his Johannesburg accent, reading almost as if the words are not his own. As the discussion begins it is clear from the similarity of interests and respect, there is a fascinating camaraderie on stage that anyone would fain interrupt with a question when the time comes.

To begin with, the common point of discussion deals with their writerly preoccupation with photos, from the rich mine of what Dyer calls “what happened on either side of the split-second that it depicted.” Gevisser, who does not take photos, still finds in them an inherent magic: “I rub these images – almost as talismans – to release some kind of ether or essence, to try and make the moment come alive.” Interestingly, he tells us, in a moment of writer's block, he consulted Vladislavić on making meaning of a series of photographs he was writing on. He was told “stop worrying about the stories and narratives, and listen to the photos.” Vladislavić then referred him to a book called The Ongoing Moment by one Geoff Dyer.

As Vladislavić also demonstrated in his excerpt on the photograph of Robert Walser, Gevisser explains that so much relies on borders and boundaries: what is in the frame and what is left out. Dyer gives an example of this, citing the famous Capa photo, which, by showing only one man facing down a soldier (and cropping out the rest of a grand battalion), could change a moment of overwhelming defeat to “something really timelessly beautiful and romantic.” Amusingly, even while they are opening up the realm of possibility and suggestion made by these photographs, the three of them are still able to mock themselves, as writers who, in a review that Gevisser mentions, don't have the skills to come up with narratives apart from photographs. “That touched a nerve,” Dyer remarks.

Changing tack a little, moving on to the notion of mapping cities, of walking and of the flâneur, it becomes apparent that they are moreover very well-read on the topic of, in Vladislavic's words, “the unique fingerprint that you leave in the city.” Dear to the heart of all, especially Gevisser, is reclaiming the notion of the flâneur, the aimless wanderer, which is a rather lost art. As Dyer comments, “People who walk in Johannesburg, with the exception of Ivan [Vladislavić] and some others, do so because they have to,” (a nod to Vladislavic's Portrait with Keys: Johannesburg and What-What).

When one question is asked later, concerning the potential “for literary extrapolation and excavation” of the modern epidemics of Instagram and selfie photography, Vladislavić is generous, saying it is being “put to new uses.” His view has focused on the confused nostalgia on memories being supplanted by a photograph. However, he suggests that “people are taking so many photographs, it's impossible to forget anything.” Privately, I wonder whether the proliferation of photographs isn't exactly what makes them forgettable to us now. It's “memory being outsourced” for Dyer, and to Gevisser, it represents “an increasing solipsism with self-documentation.” Even the mapping is no longer, as in Vladislavić' book, a means of locating oneself, because Google Maps so nicely centres your position at the heart of the map, with helpful instructions, such as “Caution: There are no sidewalks on this route.”

What it comes down to, with all three nodding and murmuring agreement for each other's comments, is “the physical space of creation”, the sense of, as Vladislavić says, “having my centre of gravity shifted” by this working with artists and photography as a means of writing into a space of infinite possibility – and paradoxically, at that, in the very spaces of the crops and boundaries of the photographs.