Gordimer: We are on the verge of discovery 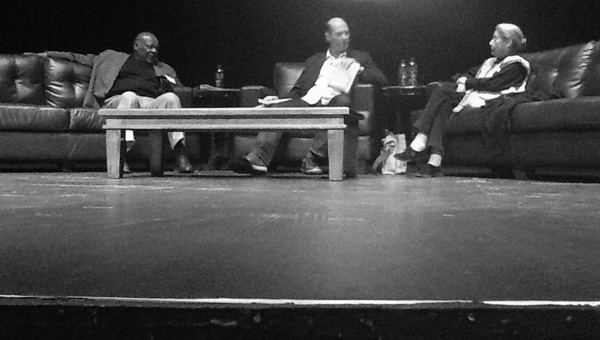 This session was planned as the headline event of the Mail and Guardian literary festival but it had to be postponed on account of Mongane Wally Serote travelling to Macedonia to accept the Golden Wreath Award for a lifetime contribution to poetry.

Nicholas Dawes, Editor-in-chief of the Mail and Guardian, welcomed the audience and guest speakers, taking the opportunity to stress the importance of the festival. He envisions this annual event as a space to reignite conversation in a “hard city”. Conversations of this nature are necessary, he says, because literature plays a role in building a social and moral imaginary.

Dawes suggests that we are living in a present where there appears to be a perpetual failure of imagination of precisely this kind. He adds that on this occasion, in the company of two writers who have proved so invaluable to the social imaginary during apartheid, we might begin to reconstitute the social and moral imagination and explore the place and possibilities of literature in achieving this aim.

Chair Craig MacKenzie, professor of English at UJ, offers brief introductions to Mongane Wally Serote and Nadine Gordimer. He is eager to engage with their writing since their work displays “an intense focus on the present”. He asks the panelists to elaborate on the manner in which their novels deal with the complexities of present-day South Africa.

Gordimer says liberation was the only goal during the struggle. No one had the luxury or time to carefully consider the thereafter. Now is the time, she opines, in which we are dealing with the complexities of what our politicians euphemistically called ‘a better life’.

In turn, Serote stresses that we tend to undermine the challenge awaiting us. For him it is more a question of owning the legacy of apartheid by doing justice to the ideals of those who fought for liberation. He wonders what we might do in the present to enjoy ease of conscience.

Gordimer interjects with a reservation: apartheid should not be seen as our only heritage; there is an entire history of colonialism that lives on and needs to be addressed in the present, too.

MacKenzie steers the two paragons of literary merit back to their texts – he proposes that their recent works are imbued with a sense of immediacy. He notes that there are many characters with fraught opinions that make for difficult dialogic exchanges in the works. Mackenzie adds that their writing also reflects a present in which one does not know in which direction the country might be going.

Serote appears to be in an anecdotal mood, relaying personal stories as poignant revelations of the state of contemporary South Africa. The disheartening state of poverty and its doppelganger, corruption, is unpacked as a current trend that has deeply embedded roots in the memory of colonialism.

Serote says colonialism was “the most effective corruption that completely dehumanised every South African”; it features heavily, today, in our attitudes towards poverty and survival. This again gives shape to the fact that the present is inextricably linked to a violent past, one which we are finding hard to shake off.

Serote argues that unless we take account of the reasons why corruption persists, we are merely engaging in the useless activity of “howling” and “shouting like headless chickens”, without effecting any change.

MacKenzie asks what they, as writers, envision as far as “change” is concerned. Gordimer says that “as writers we are not seers, we are on the verge of discovery … that's our only use or purpose in the world”.

Gordimer and Serote exchange comments of mutual admiration. Gordimer commends Serote’s Scatter the Ashes and Go for its remarkable ability to capture the mundane and human aspects of the struggle hero. In reply, Serote finds My Son’s Story and July’s People “outstanding”. He argues that Gordimer has a unique ability to travel into the lives of characters from different racial, cultural and ethnic backgrounds. As both writer and friend, he suggests that Gordimer has “become a South African better than all of us”.

In contrast to Gordimer, says Serote, he has endured an ongoing personal struggle to inhabit different cultural spaces in his writing. Gordimer replies by saying she finds it difficult to understand why people think we do not know each other. She argues that we have always known each other but are simply too afraid to express or admit it.

Still, Serote argues that he continues to feels uncomfortable when writing characters who come from cultural backgrounds other than his own. He is afraid of the minute details that will slip past his attention and effectively bar his entry into their lives. “Perhaps, though”, he suggests wistfully, “we might get to know each other, but not yet”.

Trying one more time to catch a glimpse of what the future might yet entail, according to these writers who have, thus far, remained elusive in this regard, MacKenzie asks what the ending to Serote’s Revelations would be if he had to write it now (the novel ends in 2010). Serote dismisses the question by suggesting that the audience must read Revelations; now he would rather talk about his upcoming novel, Rumours. But he says no more about this new work.

As the writers begin to wax lyrical about their fond memories of a shared past, the present also displays a great amount of tolerance for nostalgia. Not surprisingly, the first response from an audience member (Oswald Mtshali) is that of gratitude “for taking us down memory lane”. He then proceeds to ask Gordimer about the meaning of the title of her book about SA’s black revolutionary poets in the 1970s, The Black Interpreters.

Gordimer says we are all interpreters of life and meaning. She feels that the writer requires a sensibility of this kind: not to seek to imitate other writers but “to discover the possibilities of the word and what can be done with it”. This, for her, is a definition of an interpreter.

Drawing matters to a conclusion, MacKenzie asks the panelists how we carry the dream forward. Serote feels confident that we will find a way. In agreement, Gordimer argues that if we managed to demolish apartheid, then we are surely able “to make a new life here”.