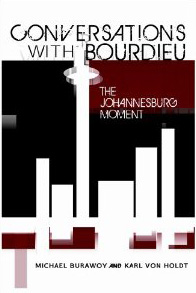 Wits University Press hosted the launch of Conversations with Bourdieu on the evening of 6 March in the Humanities Graduate Seminar room. It was an appropriate setting for the launch of a book which was originally conceived as a series of lectures on Pierre Bourdieu, the pre-eminent theorist of social order, delivered by Michael Burawoy at Wits in 2010.

The seminar room was filled to capacity and amidst the lingering aroma of complimentary hors d’oeuvres and fortified with wine, the audience settled down as Sarah Mosoetsa, author of Eating from One Pot, introduced the panel and contextualised the book’s origin. Rather unusually, Bourdieu’s main interlocutor and co-author of the text, Michael Burawoy, was present via Skype and his image was projected onto a large screen behind the other 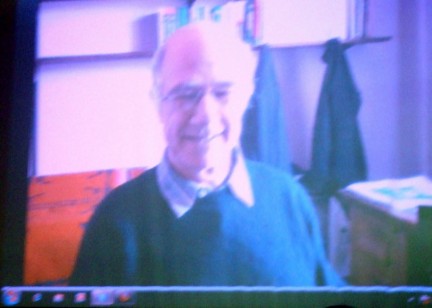 panelists: Jeremy Seekings (of UCT), Peter Alexander (of UJ) and the co-author, Karl von Holdt (Director of SWOP at Wits).

The book is structured as a series of “conversations” which Burawoy sets up between Bourdieu and other (mainly Marxist) theorists, as well as a conversation between Von Holdt and Burawoy about the meaning of Bourdieu for Johannesburg, South Africa and the “South”. The launch emulated this structure as the panelists modeled an example of critical, open and generous dialogue with the text, with Bourdieu and with each other.

Refreshingly, the panelists engaged directly with the content of the book and familiarity with the key themes and ideas was almost considered a given. This was appropriate considering the university seminar-room context and the number of sociologists in the audience. There was no pandering to those unfamiliar with Bourdieu’s theories. This framing ensured the reader was able to enter into a more informed reading of the text itself (which everyone was encouraged to buy, and many did, at the special launch-night price).

Peter Alexander opened the proceedings with an anecdote of his own (non-)interaction with the French philosopher. Alexander once wrote a letter on behalf of the South African Sociological Society, inviting Bourdieu to present a lecture. Although a secretary acknowledged receipt of the invitation, silence followed. Bourdieu never did speak in South Africa, but Alexander thanked Michael Burawoy for bringing him here eventually. He praised the book as a “work of brilliance” and described reading it as an almost “visceral experience” before he posed a few criticisms. Regarding Bourdieu’s key concept of ‘habitus’ i, Alexander contended it “might explain the durability of apartheid but not its end”, and queried Von Holdt and Burawoy’s different verdicts on the term. While Von Holdt suggests that the formulation of a “habitus of defiance” can resuscitate the term and has relevance for the South African context, the question of how that might occur and what it might mean is “left in the air by the book”. He also expressed annoyance with the book’s “parody of Marxists” and challenged Von Holdt to convince Marxists of his theory of “new class formations with facts, which are missing in the book”. He concluded by urging everyone to join COSATU’s strike on 7March and then to read the book.

Jeremy Seekings lauded the underpinning logic of this publication. He confessed that in his experience (no doubt shared by many of the academics and academics-in training crowding the room) of South African academic circles, “conversations are rare and we often ignore each other’s work or rarely take each other’s ideas seriously … this is one of the pathologies of South African intellectual debate”. Bourdieu was probably similar, in fact, Seekings declared, to much laughter, “he was probably a bit of a prick”: “[H]e didn’t read others” and if he did, it was only “belatedly and dismissively”; “he was not a conversationalist and Michael forces him to be”. This book could therefore be seen as an appeal to have, and be open to, more conversations.

Drawing on his research experience, Seekings maintained that elements of Bourdieu’s theory are relevant to understanding “the great continuity amidst the disorder”, especially in the education sector and in terms of unemployment. In both of these contexts there is a “serious problem of ‘misrecognition’, in the Bourdieu sense, of how the system works”. He hoped students would read and engage with these theories and congratulated 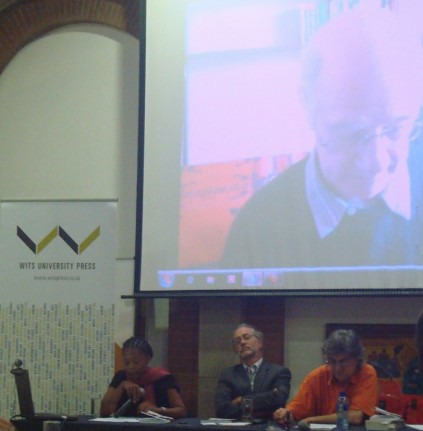 Burawoy and Holdt for dispensing with the default “starry-eyed approach to Bourdieu” and for asking how we “can make complex sense of disorder and order in South Africa”.

Michael Burawoy emphasised the importance of Karl von Holdt’s contribution to the work, admitting his “lectures were dry” and he wanted to make them more relevant to the South African context and so he “invited Karl to respond and this makes the book exciting”. Von Holdt, who at the time had been researching and writing about xenophobic attacks in South Africa, considers the “relationship between symbolic and coercive violence and that’s the South African context”. Von Holdt thus “forces Bourdieu to reconsider the significance of his work in Algeria and to bring it alongside his work in France”. Regarding their disagreements about the usefulness and continued relevance of “habitus” as a concept, Burawoy argued that it is a “fancy word for a folk concept” and insisted it needs to be replaced by “real psychology” which will facilitate understanding and conversation about “conformity and defiance”. Responding to Alexander’s comments, Burawoy explained: “I’m using Bourdieu in these conversations to problematise Marxism” and to pose questions for Marxists. He agreed with Seekings that the problem of misrecognition is important, as is the “potentiality of recognition” and maintained that the difference between Bourdieu and Marx is that the former believes “the dominated cannot understand the conditions of their domination … and denies the possibility of self-recognition” (a formulation which caused disagreement and spirited discussion amongst the panelists). For this reason, he insisted, it is “worth arguing with Bourdieu”. Burawoy concluded that Bourdieu’s main contribution to understanding the South African context was his “analysis of symbolic domination”. However, he suggested that the “final paradox of Bourdieu” is the “discrepancy between theory and practice” and the question of “who Bourdieu is talking to” – if “the dominated can’t understand”. Laughing, he added: “Who can read Bourdieu?” This is a question the book attempts to answer, by talking to Bourdieu.

The last word was left to Von Holdt, who said that if there is a parody of Marxists, it stemmed from the need “for a fragmentation and disruption of the narratives through which we’ve told our stories. I don’t know what to call South Africa now – that’s the point”. He denied that “class is redundant” but argued for the necessity of “another language to talk about why class fragments”. Regarding, habitus, “it is tricky, as it’s so attractive” in its “notion of the way dispositions are embodied”. In that sense it might shed light on how to theorise resistance, for example “toyi toying”, which is such an “embodied and eloquent” form of protest. Although habitus does not allow for theorising change, Bourdieu’s work on “symbolic violence” potentially does. Responding to Alexander’s point about evidence, in typical academic fashion, Von Holdt, with a smile, suggested it should be considered an invitation to further research. On a more serious note, he suggested his research into township protests and xenophobic violence has revealed the “sense of a symbolic order in a state of flux” and “a symbolic battle for legitimacy and to settle questions of status”. This symbolic battle for status and legitimacy extends to all arenas of South Africa, and Bourdieu’s theory can potentially assist in understanding it. He concluded that “there are many unsettled questions” posed by the book which should be considered as an “invitation to a long conversation and to not retreat to easy narratives”.

At this point Mosoetsa welcomed questions from the audience, the majority of which focused on violence. In response to how we should understand the continuity of forms of “learnt” violence “amidst the disorder”, Von Holdt suggested violence is one of the “repartees of resistance” that is “easiest to do” as “a learnt pattern” but cautioned against collapsing all forms of violence or equating the meaning of earlier forms of violence with violence in contemporary South Africa. For this reason it is important to examine “social structure”, as Burawoy has done. A follow-up question emphasised the importance of asking “which violence and whose” in any discussion of “continuity and reproduction” of violence. Alexander concurred and in reference to the descriptions of forms of intimate violence in Mosoetsa’s book argued for the need to talk of the “violence of poverty”. Burawoy agreed with the spirit of the question, and allowed that on this issue “Bourdieu offers little; Fanon more”.

Concerning potential new pedagogical approaches to teaching theory, Von Holdt suggested Burawoy’s approach might offer a model. Burawoy is “a master of placing theories in relation” to each other in order to “problematise both” and to see what happens ”when theory hits the tar” – it is often “violent”. He hoped “this book should make a modest contribution to the challenging of icons and monoliths” of theory. Seekings agreed that setting up “conversations is a useful device” in teaching theory. For example, he suggested a conversation between Bourdieu and Steve Biko and other scholars of race as well as a conversation between Bourdieu and Max Weber. This prompted a somewhat absurd and humorous exchange in which Seekings proposed that Bourdieu is actually a Weberian. Burawoy objected and pronounced Bourdieu a Durkheimian, and taking advantage of the proximity of his bookshelf, read from one of Bourdieu’s books to prove his contention. With that Wits Press concluded the discussion – the audience none the wiser as the whether Bourdieu is a Weberian, Durkheimian or simply a poor conversationalist who, ironically, “can have a conversation with any theorist”, as Burawoy insists. Nonetheless, the debate succeeded in inspiring readers to ensure their future conversations with theorists are not one-sided, and in this way to attempt to disrupt existing narratives and to confront theory with reality.

i) Although ‘habitus’ was not defined at the launch itself, the explanation provided in the book is useful for understanding the debates at the launch. Burawoy (2012, 36) quotes Bourdieu’s explanation in Outline of a Theory of Practice:

The habitus, the durably installed generative principle of regulated improvisations, produces practices which tend to reproduce the regularities immanent in the objective conditions of the production of their generative principle, while adjusting to the demands inscribed as objective potentialities in the situation, as defined by the cognitive and motivating structures making up the habitus. (Bourdieu, 1977 [1972]:78)

Burawoy then helpfully provides a gloss on Bourdieus definition:

The habitus generates practices that, like moves in a game, are regulated by the regularities of the social structure and in so doing they reproduce those structures. But practices and knowledge are bound together by the body whose importance the intellectualist vision misses. The social order inscribes itself in bodies; that is to say, we learn bodily and express our knowledge bodily – all under the organising power of the habitus, itself largely unconscious (36).