Chamoiseau: Are you on the side of beauty?

The Mail & Guardian Literary Festival opened on 28 August with a screening of the powerful film Aliker. The screenplay was written by Patrick Chamoiseau, who was in attendance to introduce the film and its setting in 1930s Martinique. Welcoming everyone, Darryl Accone, festival co-director and Mail & Guardian books editor, quoted from Patrick Chamoiseau’s Prix Goncourt award winning novel, Texaco (1992): “Literature in a place that breathes should be taken in alive”; this could be considered as the inspiration and desire motivating the festival.

Chamoiseau made a reappearance in the 10th session of the festival, “Speaking in tongues”. He was joined on stage by Fiona Horne, his interpreter and a lecturer in French at Wits University, along with Breyten Breytenbach. Their conversation – ably guided by Georges Lory, director of the Alliance Française Johannesburg and translator of South African fiction into French – gave the audience an inkling of what it might mean to “take literature in alive”.

It is difficult to provide a succinct summary of, or do justice to, a session which was in turns contemplative, meandering, elusive, always original, humorous, refreshingly jargon- and platitude-free and on occasion simply inspiring. At times I felt I was eavesdropping on an intimate conversation between two friends, the kind where there’s no need for self-consciousness and sincerity isn’t frowned upon.

Lory’s initial question set the tone for this investigation into “speaking in tongues”: “Which language do you dream in?” Chamoiseau, via Horne, explained that as a Martiniquais (or Martinican in English), he “comes from two languages: Creole, the dominated language and French, the dominating”.

As a result, he thinks of himself as “a bit of a schizophrenic”; he “exists in both French and Creole”. The complex interactions of languages in this “space of creolization” he termed a “matrix” – a concept which recurred often in this discussion.

However, he supposed that if the content of the dream were “deep and intimate” it might be in Creole, the language he first spoke; if it’s “very light”, then in French, the language he was educated in. He surmised that “in years to come, people may have many mother tongues”. To which Lory comically interjected: “Let’s hope French remains the language of love!” Breytenbach contemplated the existence of a unique “dream language” and the similarities or continuum between the dream state and poetry.

Lory steered the conversation to the legacy of one of the more famous sons of Martinique - Frantz Fanon. Breytenbach responded idiosyncratically: “I’m a chameleon. I adopt any country. I consider myself a Martinican because of Fanon, [Aimé] Césaire and Chamoiseau.” Then, more soberly, he reflected on the meaning of Fanon’s “heroic” life and the “formal beauty of his expression”.

Breyten Breytenbach voices his sense that he is a “chameleon who can adopt any country” as French interpreter Fiona Horne, Patrick Chamoiseau and Georges Lory give him their very best attention

Although emphasising how much he gained intellectually from reading Black Skin: White Masks, Chamoiseau maintained that, in terms of identity, “the colour of one’s skin cannot determine culture anymore. The whole imaginary should not be centered on skin colour.”

Referring to Fanon’s request to be buried in Algeria, he concluded that there is an element of choice in “belonging” and in the “principles we adhere to”. And, as if with a flourish at the inescapable logical conclusion: for that reason Breytenbach “is also from Martinique”.

Lory quoted an Algerian writer who wrote in French, claiming he “took French as war booty”. He asked Breytenbach if he felt the same about English, to which the short version of a longer answer was “yes”.

Chamoiseau posited the existence of “rebels” and “fighters” in relation to language (although there was disagreement as to the best translation of these terms, Breytenbach suggesting that “warrior” was more apt). A rebel “takes and appropriates a language” whereas a fighter/warrior adopts the language and develops it, such that there is no longer a hierarchy and the language is used to free the self.

Lory encouraged Chamoiseau to consider the meaning of colonialism today, and young Martinicans’ relationship to France. Chamoiseau explained that when inhabitants of France’s previous colonies arrive in France, and witness the memorials and inscription of French history, they are “confronted by memories not their own”. There is “a need to talk, to create a rampart against the barbarism of the past”. He proposed that perhaps something akin to the Truth and Reconciliation Commission should happen on a “world level”, so that a “collective memory” is created.

Breytenbach insisted on the importance of a “moral imagination”, but diverged from Chamoiseau’s reading of memory, claiming it is often “disruptive”.

Chamoiseau contended that the “function of the artist”, as opposed to say, the politician, is to “transform the social imaginary” and this is the function of the “warrior”. Literature must go to “where beauty lies” and there is “no beauty in hierarchies, crime or genocides”.

It is rare to hear beauty taken seriously in an intellectual exchange, and not considered a cliché.

Chamoiseau continued that “South African authors such as Coetzee, Fugard and Gordimer are on beauty’s side”. They are similar to Césaire in the sense that “beauty gave people the strength to fight” systems of injustice. Perhaps the question everyone should ask themselves is the one Chamoiseau suggested: “Am I on beauty’s side?”

Lory expanded this area of inquiry by prompting the authors to consider their experiences in prison, about which they have both written. Chamoiseau mused that what apartheid showed was that “inhumanity calls for even more humanity”. His own recent reading of Solzhenitsyn’s One Day in the Life of Ivan Denisovich confirmed this idea.

Breytenbach explained that the “criteria for defining beauty are different in prison”. Beauty resided in the “concrete little things”, in a “shredded piece of red paper blown over the courtyard”. He agreed with Chamoiseau’s formulation of the necessity of beauty, which is a “moral or ethical force”. 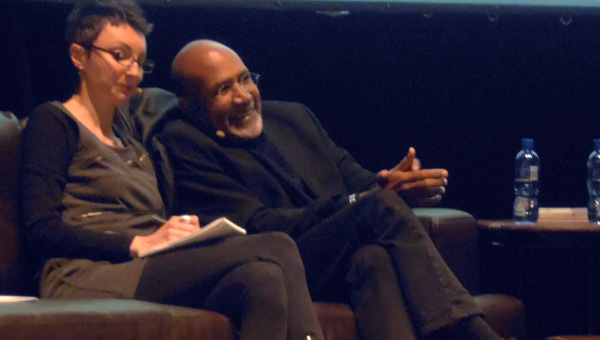 Patrick Chamoiseau could hardly contain his ebullience on stage, winning many new fans

The conversation which began with a consideration of the language of dreams concluded with the role of translation in waking life. Chamoiseau spoke of his first encounter with Césaire’s “Return to My Native Land”, describing it as an “incomprehensible poem, because it encompassed another imaginary”. That was the source of its beauty.

Chamoiseau said that in the past translation could be compared to the practice of colonisation: “translators had to impose their own norms on the work and did not tolerate the opacity of others”. They needed to render the opaque “transparent”. Instead, he argued, “translators should be shepherds of opacity”.

Breytenbach commented self-deprecatingly: “Some of us practice opacity without meaning to." But on a more serious note, he concurred with his “fellow Martinican”: “People can be moved and changed by that which we don’t understand.” He suggested that it is “a tremendous act of generosity on the part of the writer to bring forth what you cannot explain fully and share it”.

On that note, Lory thanked his guests and Horne, too, for her simultaneous interpreting. As the conversation between the writers came to an end, it continued among audience members, trying to digest the debate. I think Chamoiseau won a crowd of ardent new admirers as a result of his appearance at this festival, although unfortunately his books remain relatively scarce on the South African book scene. The few copies that Love Books had been able to procure were sold out long before this session ended.