The struggle of memory against forgetting 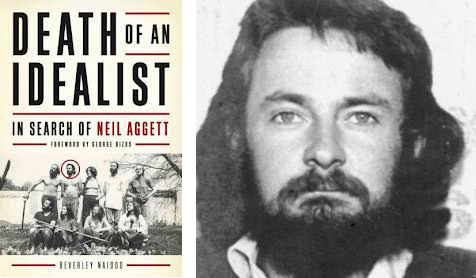 Death of an Idealist: In Search of Neil Aggett by Beverley Naidoo, Jonathan Ball, 2012.

In his powerful and succinct Foreword to Beverly Naidoo’s book, George Bizos reminds us that under apartheid, those like Neil Aggett who had close links with African trade unions were regarded as enemies of the State. Aggett was found hanging from the window grille in his cell in John Vorster Square on February 5 1982, after 70 days of incarceration. He was the 51st prisoner, and the first white person, to die in detention under the apartheid regime. Naidoo’s biography is not only a superb memorial to a wonderful young man, but a consistently insightful exploration of the issues generated by his life and death.

The book carries exceptionally eloquent epigraphs, including ones from Milan Kundera (“The struggle of man against power is the struggle of memory against forgetting”) and Dullah Omar: “The vast propaganda machine of the State creates a situation in which people do not know their own history. For instance, we have lived through the period in which Neil Aggett died. What steps have we taken to ensure that the lessons of today will be taught to our children?” This has long been a preoccupation of Naidoo’s, a guiding concern of her much-praised novels for young readers. The long-banned Journey to Joburg opened the eyes of children (and their parents) worldwide to the iniquities of apartheid. Similarly, Naidoo’s two novels on the lives of Nigerian children in exile in London were concerned with conscientisation, and Burn my Heart, her novel on white and black children growing up during the Mau Mau, must have segued thematically into work on the present book, Aggett having grown up in colonial Kenya.

Naidoo opens her narrative by recording that Aggett was the son of her cousin Joy, and how she heard the news of his death, the ensuing protests and the extraordinary funeral procession from her home in exile in England. Aggett had been ten when his family moved to the Cape to avoid living under the new black government in Kenya. The Rivonia trialists were being locked away for life; the security police had unfettered powers; Naidoo and her brother were detained.

There follows an acutely moving account of Naidoo’s first meeting with Aggett’s parents on her first return to South Africa in 1993: “[W]hat strength of character it must have taken for Neil to stand up to, and break away from, this powerful father. The terrible irony of the death of a son at the hands of the police state that his parents had once so admired struck me more sharply than ever.” In the words of David Dison, the father’s attorney: “Of all the people he had known in the commune crowd and on the left, Neil had broken away the most completely from his family. He was uncompromising. He lived his ideals.” In light of this context, the conduct of Aggett’s parents in the dreadful weeks following his death seems all the more heroic.

Naidoo’s first chapters deal with the Aggett family history in colonial Kenya from the 1920s onwards. Astutely – and this is a book sharply aware of the complex ideological formations that underpin Aggett’s story – she highlights the significance of imprisoned trade union activist Harry Thuku, whose articulacy threatened the core imperial belief in innate European superiority. The family history is recounted with a novelist’s eye for vivid detail and telling cruxes, and with a view to establishing “the colonial interweaving of Kenya and South Africa”. There is the occasional endearing personal note, such as the revelation that Aggett’s father composed a song for the sweetheart of the British armed forces, Vera Lynne. And in the writing there is real bite: “[T]he presence of wildlife was not regarded as an intrinsic threat to the settlers’ way of life. But the presence of ‘undomesticated’ Africans was.” Hence the horrific history of forced removals and the terror imposed under the State of Emergency.

The Aggetts move to South Africa: “The apartheid state, under Hendrik Verwoerd, welcomed the white families escaping black rule ... South Africa cultivated the image of a bastion of Western civilisation in Africa.” At boarding school, Aggett is a boy “both sensitive and tough”, embedded in the establishment (rugby, prefecture, cadet training), but signs of change come through his diaries, with his consciousness beginning to tug at his traditional moorings. He begins to show an interest in moral and social issues and poises himself for a future as a doctor. Throughout this account, despite the historical distance between author and subject, it is a relief to find Naidoo hardly ever indulging in the biographer’s stock-in-trade fleshing-out devices, such as “surely” and “it is likely that.” Her text exudes both clear insight and reliability.

After matric (with a first) Aggett goes to the remote Moffat Memorial Hospital near Kuruman, in the heart of the lethal asbestos-mining industry, an indicator that he is already beginning to think about medicine in its social context, though whether he is sufficiently politicised at this time to recognise the fundamental injustice of the South African state is unclear. The portrait of Aggett fills out, though, with the recorded memories of his partner Liz Floyd, as well as the journals in which Aggett entered poems and commentaries on world affairs, and his responses to these. At one point he counters Hugh Montefiore’s despair at a world devouring itself with the assertion that there must be hope – with the need “not [to be] prepared to see injustice and racism and poverty stand as they are”.

By 1972 Aggett is taking part in demonstrations and an explicit rift has opened between him and his father. As Naidoo puts it: “With candour, sincerity and lack of rancour, Neil separates himself from his parents” yet, in a deeply moving letter to his mother, love and respect for his parents take on an incandescent glow.

In Umtata (Mthatha) he joins a community of highly politicised black doctors. Then comes Joburg and his alignment with friends and colleagues, committed to the realisation that the struggle will be led by black workers (how the white left is to assist in this being a matter for dispute), and to the symbiosis of trade unionism and political activism. Key figures in drawing Aggett into this sphere are Gavin Andersson and Sipho Kubeka, whose stories Naidoo tells in flashback. Naidoo captures expertly the cliff-hanging atmosphere of those days: “With the closest of comrades, there were still questions of what to share and what not to share. They were learning from each other, and the ‘need to know’ principle didn’t always lay down strict boundaries.”

In a chapter neatly titled “Breaking the Rules, Making the Rules”, Naidoo traces the activities of Aggett and his associates – vegetable farming and woodworkers’ cooperatives; a Capital reading group; attempts to gain more active, radicalising involvement in the union movement. But there are also deep tensions as Aggett’s idealism and some of his less orthodox ideas, are interpreted by comrades as “rabid ultra-leftism.” Frustration and loneliness are never far away. Yet any suspicion that Aggett may have been intolerably stubborn and didactic are punctured by Naidoo’s demonstration of how good he was at what William S. Booth has termed “listening rhetoric” – the ability to grasp another’s point-of-view and admit the merits of this, as a basis for attempting consensus.

The central part of Naidoo’s book proceeds to cover a period of increasing political activity and the first steps towards union consolidation. It also deals with the infiltration of the white left and their arrest. One appreciates the latter account all the more in that it was researched in the face of tremendous obstacles – the pre-1994 shredding by the apartheid security forces of some 44 metric tonnes of documents, and the continuing difficulty in getting surviving documents declassified (Naidoo draws a shaming contrast with the release of Stasi documents in Germany).

The final section deals with Aggett’s arrest, interrogation and death, and the subsequent public protests and inquest. On the interrogation, Naidoo explicitly admits she has used her novelist’s gift of imagination to build up the narrative from the security forces’ inadequate or duplicitous records and the memories of Aggett’s fellow prisoners. She notes that the inquest was the longest and most expensive in South African history and one of the most shameful. George Bizos recalls: “Our experience taught us that if we accepted the police’s version that [Aggett’s death] had been a suicide, we could open up a wider inquiry into [his] general treatment than if we argued it was a murder. Our hope was that we could convince the magistrate that the security police could still be held responsible for driving [him] to suicide.” In a judgment that took two days to read the magistrate exonerated the security forces.

One participant at the inquest stands out with particular, shocking clarity – Aggett’s chief interrogator, Steven Whitehead: in Bizos’s words “immature, ambitious, aggressive.” As for the verdict, Bizos terms it “unbelievable” and Naidoo “outrageous.”

Two short final chapters of this terrific book address the Truth and Reconciliation Commission and its implications for an understanding of the scope of human rights and the mechanisms that attempt to protect these. Naidoo’s closing words refer to “the dream of an equal just society urgently awaiting creation.” This is all too clearly work unfinished.

A tribute from Gavin Andersson read out at Aggett’s funeral states: “[I]n the middle of this terrible moment, when we stop to mourn the loss of such a wonderful person, let us also rejoice that in the end he has been victorious over his persecutors, over his killers. Because the ideals and the cause for which Neil worked so hard, these didn’t die on the 5th of February.”

With the appearance of Naidoo’s book, determination to seek justice has been re-ignited. Two months following its publication Drew Forrest reported in the Mail and Guardian that Steven Whitehead is now a prosperous business counterintelligence consultant whose clients include government departments. In an editorial in the same issue, Milan Kundera’s words on memory are quoted, followed by the comment that Stephen Whitehead “would dearly love South Africa to forget what he did.” But a book like Naidoo’s subverts this wish. The editorial is titled “Time to bring this torturer to book.” Subsequently the Neil Aggett support group has petitioned Minister of Justice Jeff Radebe to have those responsible for his death finally charged. Naidoo stated in a radio interview with Jenny Crwys-Williams on 5 February: “Neil’s is just one of many cases in which perpetrators of abuses either chose not to apply for amnesty under the TRC, or they applied but did not receive amnesty. They gambled that the South African government would not pursue them, despite the terms of the TRC.”

It is high time that that gamble ceased to pay off.