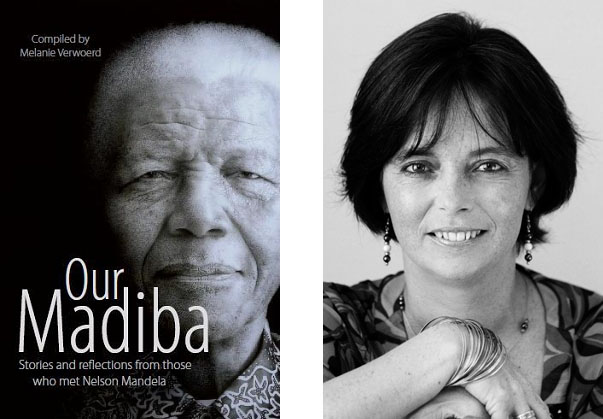 Launch of Our Madiba: Stories and reflections from those who met Nelson Mandela compiled by Melanie Verwoerd, Brudyn Gonsalves Gallery, 16 July 2014

It's a humble looking book. A picture of Nelson Mandela looks baldly from the black and white cover. The cover art by artist Paul Emsley actually on display, and in the Brudyn Gonsalves Gallery, to mingle under the magnificent gaze of the portrait in pencil, the gathered guests come to celebrate more than the book: the life of our Madiba. And what better way to celebrate, than with cupcakes, coffee and wine, for his birthday, and this tribute compiled by esteemed activist Melanie Verwoerd.

It is truly a labour of love, not so much in effort, but in feeling. With over 140 accounts of personal encounters with the man whose person is enough to unite a country, the book surely boasts the most thorough epitaph for our beloved Tata Madiba. Contributors range from popular satirical cartoonist Zapiro, to the honorary guest of the evening, Archbishop Desmond Tutu. Arranged under headings such as “Warmth”, “Not Taking Himself Too Seriously”, “Forgiveness”, “Courage”, and “Sense of Humour”, the book reads like an encounter with a friend, a transcribed conversation of loving anecdotes told after a memorial service. As captured by Shaun Johnson in the introduction,

Speaking on the birth of this book, Verwoerd shares how meeting Nelson Mandela changed the course of her life irrevocably. Former director of UNICEF Ireland, and youngest woman to be elected to parliament for the ANC, her tales are certainly worth attention. However, after the publishing of her memoir, she was approached by many more people coming forward with their stories of Madiba. The result is this beautiful book, which belongs, she says, as much to her as it does to its contributors, quite a few of whom were in attendance. Before handing over to “the Arch”, there was a song by talented young singer, discovered at age 14 by Tata Madiba. It seems there is no one that his life has not touched.

The address by the Archbishop certainly charmed the audience who were very ready to laugh at his jokes (and even more at his utterly infectious chuckle) and nod at the nuggets of wisdom that he frequently let fall. He spoke generally on how extraordinary South Africa, as a country, was, that it could have produced such great people or done what we have done, remembering specifically at this time “minute little” Nadine Gordimer. “Only we,” he says emphatically, “could really have shown the world that it is possible for enemies to become friends.”

To finish the evening, Verwoerd thanks the contributors both to the book's compilation and publication, and to the event. She also extends a request, as part of a worldwide Mandela Day programme, to donate books on Nelson Mandela to local libraries. After the hasty exit of the Archbishop, the remaining books are taken around to the various contributors for signings, each person with at least one – if not two copies – of the precious tome tucked under the arm, and the counter which at the opening of the evening had held two pyramids of books, now stands emptied.

Of the book, as Archbishop Desmond Tutu sums up so eloquently: “This is a fantastic anthology of ordinary people... But here are no ordinary people. Madiba helped us realise that we are each one of us special... That was what Madiba had the capacity to draw out of us.” What is more, from all the accounts shared throughout the evening, one gets the sense of our Mandela, held up as a timeless legend even while he was still among us, as a personable someone, not who “belongs” to us, but as someone whom we knew, who sat in our living rooms, invited us in for lunch, whose knee we sat on as children. If nothing else, this book shows how close he was to our hearts.