From a Place of Blackness: wake up or get out 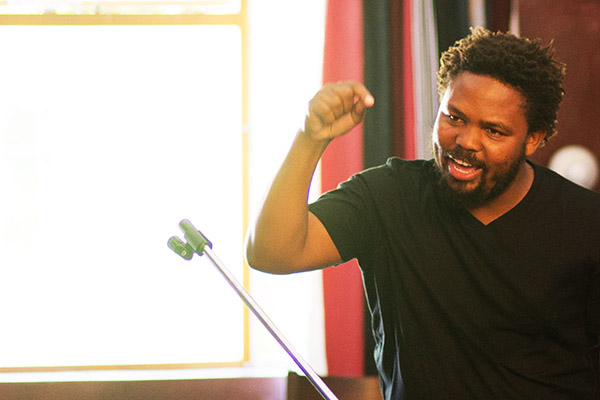 Launch of From a Place of Blackness by Andile Mngxitama and Aryan Kaganof, 17 November 2013,  Bolo’Bolo, Cape Town.

The venue, Bolo’Bolo – an anarchist infoshop and vegan café – was packed to capacity; not exactly the usual Sunday afternoon scene in Obz (or anywhere else in Cape Town for that matter). But this was not exactly a regular event. On the stage sat Andile Mngxitama (one of the leaders of the EFF political party) and Aryan Kaganof (no introduction needed), ready to launch their new book titled From a Place of Blackness: A Correspondence between Andile Mngxitama and Aryan Kaganof (Pine Slopes, 2013). As they were about to begin their conversation, I picked up the book for a quick glimpse, trying to get a sense of what we were in for.

From the cover a young, white boy, probably aged between 2 and 3 years, stares back at me, wearing a Steve Biko shirt. This is the first clue to the book's content, which is structured as a series of communications, including SMS messages, emails, conversations and musings between these two friends. But at this time my thoughts are interrupted as the speakers are introduced.

Who would speak first, I wondered? The white man, said Mngxitama reading our thoughts, the white man who tells me what to do! Mngxitama explained this position as one of impossibility: he needs for Kaganof to recognise his pain; he needs Kaganof to stand in for whites and to say that he sees the suffering of black people. He – Mngxitama – relies on the white man – Kaganof – to legitimise black discourse. It is this paradox and others like it that the authors explore in their book. 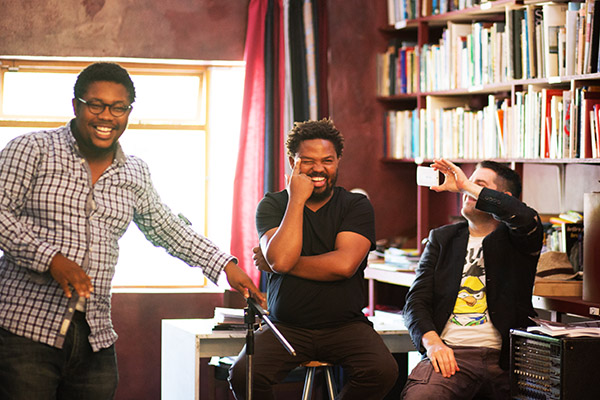 Kaganof was less vocal than Mngxitama, relying on the hard-won reputation he has built for himself over many years, demonstrating, ironically, the privilege of the white man. In keeping with this theme, Mngxitama emphasised that the race question is in no way abstract; black experience is exactly the opposite – a daily concrete experience but one which remains largely unacknowledged by and unknown to white people.

The radical black thought of Mngxitama is rooted in a deep understanding of earlier works by Frantz Fanon and the Black Consciousness movement which continues to ask how the problem of racism can be resolved. For Mngxitama it is a matter of speaking back, of speaking black, but also of having recognition despite race in the world at large.

So how did the book come about? It was not the aim at first, said Mngxitama. It started as an informal conversation between two friends – one white, one black – a way to delve deeper into the core issues of racism. The idea of publishing these conversations came later, and dramatises the afro-pessimism position, i.e. the inability of black people to speak back to white people within the context of structural whiteness. And the fact remains that even though Mngxitama and Kaganof are friends, Kaganof is a white liberal; there are no consequences for him. And sure, said Mngxitama, there is rhetoric of “black is beautiful” in our country and elsewhere, but black is beautiful almost always inevitably ends up equating chains on a plantation or the like. Don’t tell me then that black is beautiful, said Mngxitama, say it as it is: tell me I am a slave!

That both shut people up and spread a wave of short conversations between audience members. Unfortunately, but I suppose inexorably, this very nuanced discussion led to a bit of polemical EFF politicking, but was rescued by the Q&A session, which ended in a dramatic climax: Mngxitama stated that he realises there is white fear. But we don’t want to kill people, said Mngxitama, we want to kill whiteness so that white skin means nothing different from any other colour skin any more. But, he added, this still means that we need a revolution. And this is where you heard the drumroll in your head as a guy in the audience interjected and Mngxitama told him point blank to shut up or f#!k off. Well, a small, obviously touched-a-sore-point group chose the latter option and exited the building.

Anyway, eventful as it was, the debate once again made (at least most of) us rethink the politics of race and our roles we play in it. As Žižek once said (more or less), even when you take an ironic stance which distances you from what is taking place, you are still participating.