Writing sexuality (or not!) 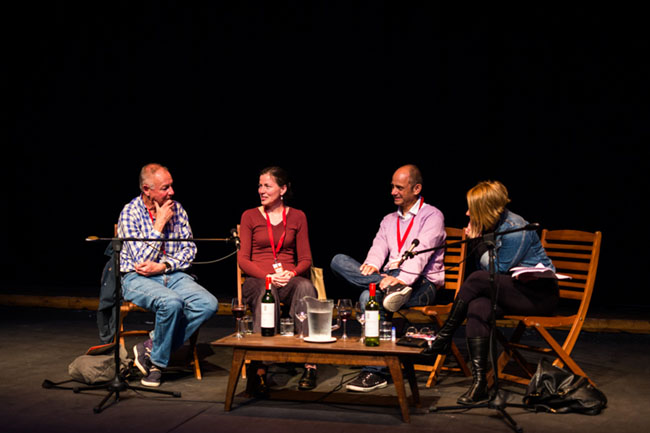 The Open Book Festival is taking place for the fourth time this year. That’s quite a feat considering the impressive line-up. The first session I attended was titled “Writing Sexuality”, panelled by Damon Galgut, Karina Szczurek and Michiel Heyns, and chaired by Karin Schimke. Schimke opened the discussion by reading the lyrics of a Nicky Minaj track. It goes something like: “My Anaconda don't.../My Anaconda don't.../My Anaconda don't want none unless you got buns hun”... Well, you can imagine the rest. At the end Schimke promptly announced that she’s tired of sex. ALL SEX! (Oh dear, I thought, sorry to hear. Eek!) But okay, to be fair, I get what she’s saying. We’re inundated with sex. It’s everywhere. And it’s gratuitous. In fact, every series seems to have a compulsory nude slot these days. Yawn, yawn. But that’s not literature. So what, as Karin went on to ask, is the function of sex in literature? (And here I must say that I was somewhat confused again because the session, I thought, was about sexuality, not sex. Those are qualitatively different things, are they not? Intertwined, yes, but separate.) Anyway, the discussion did not focus on sex and sexuality, but rather on the difference between pornography and erotica.

Well, says Galgut, except for Arctic Summer, he avoids writing sex scenes, because very few novels hinge on sex. But, he adds, it must be said that someone like Alan Hollinghurst (think The line of beauty) treats sex very well – and doesn’t shy away from being explicit. But no, Schimke wants less. She misses the days where books like Princess Daisy still had shock value. Yes, adds Galgut; he remembers Wilbur Smith’s books doing the rounds at school. Heyns adds that he avoids sexy descriptions in his novels because sex isn’t interesting in itself.

Okay, hang on. Really? Do people (some around my age!) really think this? Because I think sex in itself is interesting. Also in literature – especially in literature – where it has the opportunity to walk into so many different rooms, experience so many different kinds of sex, be so many different expressions of sexuality. I think here especially of Patrick Califia’s Macho sluts and Octave Mirbeau’s The torture garden. Surely just because certain industries have eviscerated nuance doesn’t mean that sex is boring; it only means a certain kind of sex is boring. And that sex, still too often, is expressed in a normative, heterosexual way. So is that not perhaps the more important issue at hand?

And here Karina Szczurek added what I thought was an important point: sexuality is wider than the term ‘sex’. For her it is about longing, eroticism, anguish and sensuality. It is something which can be expressed physically and emotionally, but it is also a more subtle driving force, and it is always with us – even in memory. She adds that she likes to read about sex because it is a way for her to understand that which is beyond her preference. But it doesn’t have to be explicit, she says, because that’s pornography.

Again, I get the points made, but I really don’t think that explicit sex scenes necessarily translate into pornography. Surely there can be more subtle readings of explicit sex. I’m obviously not referring to trash like Fifty shades (and it must be noted that I call it trash without ever having read it, but hey, sometimes you just know) or whatever, but maybe Hollinghurst is a good example here. As is Patrick Califia, who really addresses sexual identity (sexuality) – “whether you’re a woman or a man, straight or gay, femme or butch, vanilla or hardcore, trans, bi, queer, undefined, or who knows what at all”. Because this should have been the crux of the session which was, frankly, middling. It should have addressed what is possible through different sexualities – and even different kinds of sex! – in literature/s. Because, as Galgut so beautifully put it, “the aim of books is to show you that life is not made in your image.” Now if only they had talked a bit more about that.