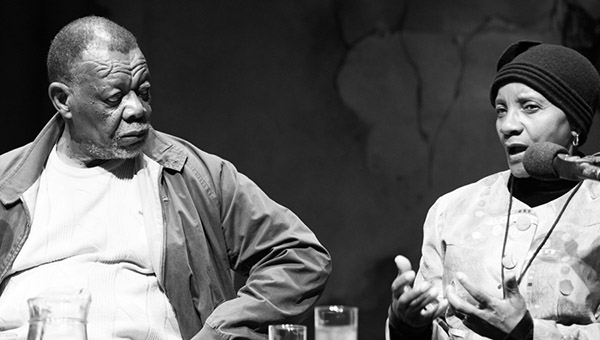 “My writing stems from the exquisite agony of being South African”, says Sindiwe Magona. This kind of phrasing, one that draws on an embattled sense of a local history, both fraught and redemptive, is common among this morning’s speakers. At the inaugural seminar of Open Book 2013, Professor Harry Garuba asks three heralded authors – Magona, André Brink and Mongane Wally Serote – to speak of the “enduring themes” and “transformations” of their work. All three gesture toward a national-historical experience that has, for them, been one marked by its ambiguities, its tensions and Magona captures this sense of unease in the phrase, “a country of contradictions”. Brink, in his turn, evokes the following: “South Africa is a haunting and shattering and inspiring and terrible and wonderful presence, and I would never like it to be different.”

It intrigues that these writers interpret the question of their literary biographies as one of a career within a particular nation, all summoning South Africa both as an enmeshed multiplicity in which they find their creative origin, but also as a thing of social and political life, in which their works circulate with an (imagined, hoped for) possibility of narrative healing (well, Magona is the primary candidate for this). Brink speaks of South Africa in terms of its “challenge”. It is a country to him, from consciousness of his earliest literary sensibilities, in which “change was already something endemic.” In a moment of esotericism, he speaks of the “nurturing, motherly given of ‘Mama Africa’ [he pronounces this “Uhf-rica”], without whom and without which none of us can ever function, can ever be a person.” South Africa acts as some national entity which calls him into being as writer. He says it “forces one to probe one’s being human, one’s being alive, posing constantly the questions about where we come from, how we got here and where we’re moving… that wonderful, inspiring darkness into which we constantly move.” This, he says, is “one of the joys of knowing we are South African.” One wonders if Brink triumphs a little too gloriously in the umbrae of postapartheid.

Magona equally takes the question of her career to be one less about literature itself, and more about the formative influences of South Africa, “a country that gives us so much hope and then dashes it”. She tells personal stories – of teaching at Herschel in the 1980s, of certain realisations about race and its phantom presence when she was 30 – all of which speak to the idea of a subalternised black sensorium learning to re-assert itself against the degrading signifiers of apartheid. “Getting to know one another has absolutely nothing to do with skin,” she reiterates; “It’s to do with the human being inside the skin”. Literature for her, and the second part of her twenty-minute answer moves into the realm of activism and civic consciousness, is a document of an experience within the nation. “Those of us who can string together a few sentences ought to leave a record,” she says. “It is not quite yet Freedom Day… economically, socially and spiritually, we are still wounded: and therefore, I write.”

Serote is the last to speak, with his magnificently bassy, plangent voice. He speaks of the murderous, militant passions of his younger years among the MK underground, in which he wanted to, and he recites this with a slumberous, but almost incantatory energy, “kill all white people, kill all Indians; kill all coloureds”. If Brink finds darkness joyful, and Magona emphasises the “exquisite” properties of agony, then Serote reveals something of its un-worshippable aspect: the rage, the subjugation, the more chaotic materials from which a nationalist literature cannot find existential solace and political continuity. He also gives of his biography, speaking of the “moment of conflict”, when he met Bram Fisher, and the galvanic words of Oliver Tambo, who impacted his thinking on violence as the ultimate recourse for African independence, who asked him whether he imagined the end of apartheid as a country “strewn with corpses, and everything reduced to ashes”.

Regrettably, the authors do not get to speak about much more than this, and at question-time, some familiar anxieties: about whether South Africans can write novels which are not “political”, or about the theme of exile in the formation of the African intellectual, or about what some critics are calling a “spiritual turn” in Serote’s work, or whether Magona writes in Xhosa (she does, translating her own work).