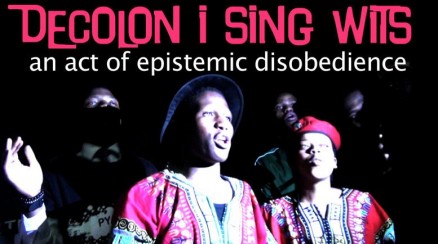 The #OpenStellenbosch collective facilitated a show-and-tell with maverick South African film-maker Aryan Kaganof on Wednesday night. The session revolved around a showing of Kaganof’s new documentary, Decolonising Wits, a film whose subject material is how the rolling drive to decolonize South African universities is being undertaken at Wits.

Decolonising Wits is certainly controversial, and its creator doesn’t hold himself above that controversy. Kaganof begins this Stellenbosch screening by reading a vitriolic commentary on his latest work by someone who objects to what they see as Kaganof’s appropriation of Black Struggle for his own ends. “Fuck Kaganof!” the missive ends, and it’s this sentiment that the filmmaker urges us to keep in mind as we watch the documentary.

Decolonising Wits clocks in at just under one and a half hours, but it’s a riveting watch. It follows a group of EFF student league members who are in the vanguard of the transformative movement at Wits University. Over the engaging duration of the film, we see the movement – led by Malcolm X-like firebrand Vuyani Pambo – lock horns with a hapless SRC, a harassed-looking Adam Habib, and occasionally with each other. 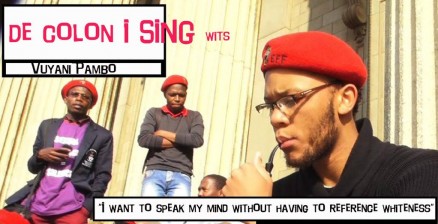 The footage is underpinned by the voices of the students themselves – a constant driving chorus of struggle songs and defiant footfalls as they claim a space for themselves at their institution. Kaganof makes the welcoming decision not to subtitle the documentary, ensuring that it is a constitutively alienating experience for those who occupy positions of privilege. “I wanted to make a film that doesn’t feel guilty about its Blackness”, says Kaganof.

The audience for this screening is mostly Black, and a lot of them take up singing in solidarity with their student compatriots on the screen. It’s hard not to be drawn in by the energy with which the Wits students sing “Hondo”. They’re the same sort of struggle songs that cause white students at Stellenbosch University a very necessary discomfort.

There are cameos from people like Lesego Rampolokeng and Andile Mngxitama. The latter encourages us to view Wits (and South Africa, more broadly) as a neo-Bantustan serving white capital. There are amusing clips from Mcebo Dlamini, but the quietly charged testimony from a disabled student about Wits’ failure to provide for the disabled students in its charge reminds us that there are other kinds of transformations needed at these Historically white higher education institutions.

Decolonizing Wits is the medium for a message that needs to be told. It delivers this with nuance while avoiding the pathologically fraught position that such expressions tend to occupy. It’s an excellent piece of film.