Zapiro and the poets zap the system 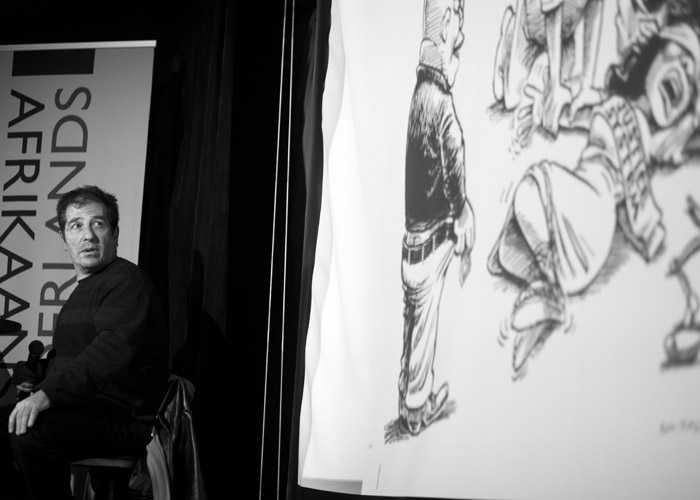 When Jonathan Shapiro is welcomed to the stage at a packed-to-the-rafters Klein Libertas Theatre, het is greeted by uproarious and warm applause, in contrast to the freezing weather outdoors. Interviewed by Marlene van Niekerk, Shapiro, or “Zapiro” as he is more commonly known, comes across as bright, theatrical and almost as animated as the political cartoons that have won him such fame. Van Niekerk lauds Zapiro’s pluck in challenging those in power, and for leading through the power of laughter. She says: “I envy your courage, and your unflagging wit.”

Zapiro responds to her high praises modestly but not obsequiously. Reflecting on the commentaries and ruminations inspired by his work, as expressed by the poets featured on the evening’s programme, Zapiro claims he is blown away by these peers, explaining to the audience that it was truly gratifying to be perceived and interpreted in so many varied and meaningful ways. “You guys made me nervous to appear, now!” he adds.

Though Zapiro has little to worry about in terms of feeling intimidated, the poets who appeared on stage before him all showed, each in their own way, that the power of Zapiro’s satirical activism certainly translates interestingly in the verbal sphere. 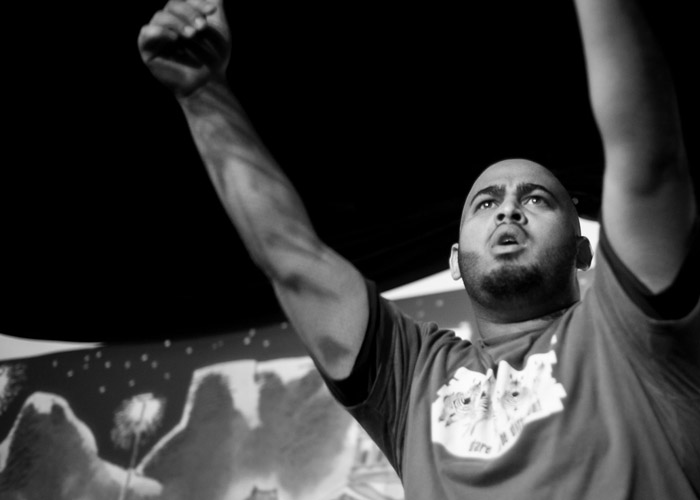 The first dynamo on stage was the larger-than-life Adrian Different, appearing as his Afrikaans alter-ego, Adriaan Verskillend. Standing in front of a projection showing one of Zapiro’s cartoons, and wearing a t-shirt emblazoned with the imperative, “Dare to be different”, Verskillend coaxes the responsive crowd into a resonating chorus of Kaapse slang. The cartoon scene in front of which he performs shows a bergie silhouetted by Table Mountain, incredulously crying out in his speech-bubble: “Athens se ma se @*#&”. Verskillend launches into a tirade that explores and ponders the complexity of cultural chasms, specifically between South Africa and Europe. His “klanke” certainly “têkkel” his audience as he builds to a crescendo, at which point he dares not only to be different, but to pronounce the taboo word concealed behind the “@*#&”. 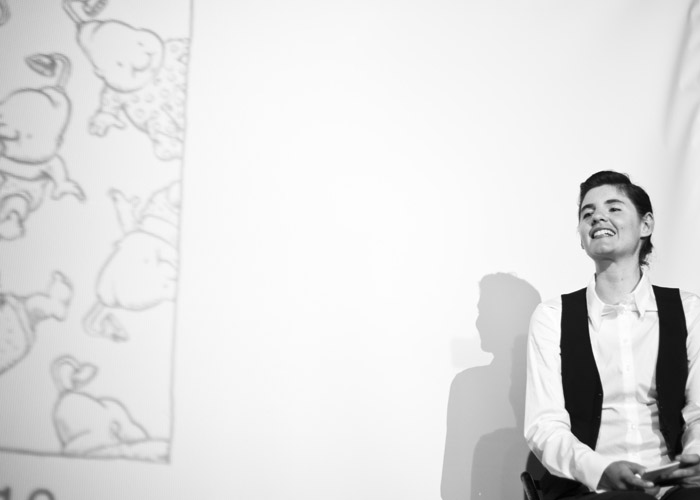 Following Verskillend is Bibi Slippers. Perched primly and diminutively on a chair to one side of the stage, she appears to sit alongside Zapiro’s satirical depiction of a “baby shower” as she commences the telling of her warped and deliberately corrupted nursery rhyme. Her use of a familiar metre and rhythm subverts the expectations associated with such cosy metrics: her content is sharp and critical despite the sing-song way in which she recites it. There is something uncanny about her sweetly acerbic presentation, and the critique she makes of the current administration echoes the sardonic sentiments expressed in Zapiro’s sketch, especially in her haunting refrain: “And all the pretty little horses.” 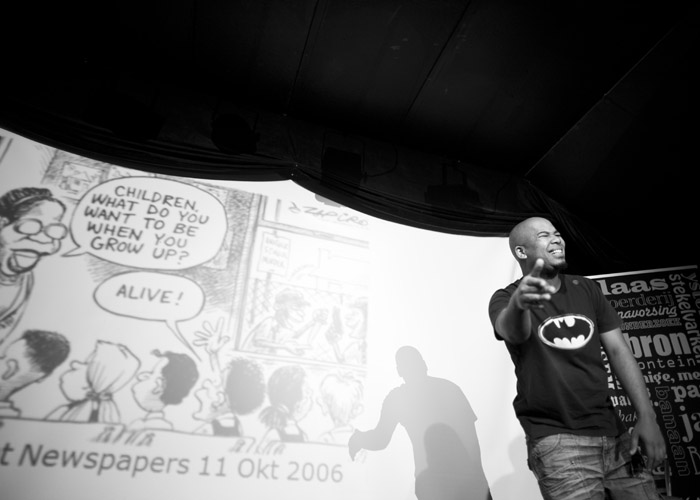 Promising to communicate “die sagte vleisies van coloured wees”, Rimestein takes to the stage. He has drawn his inspiration from a pair of naughty coloured boys drawn outside a classroom window in Zapiro’s cartoon. Armed with three fingers held to look like a gun, Rimestein resembles a different sort of Dark Knight in his Batman t-shirt as he questions the meaning of things taught at schools, the relevance of certain subjects, and the mysteries in history. 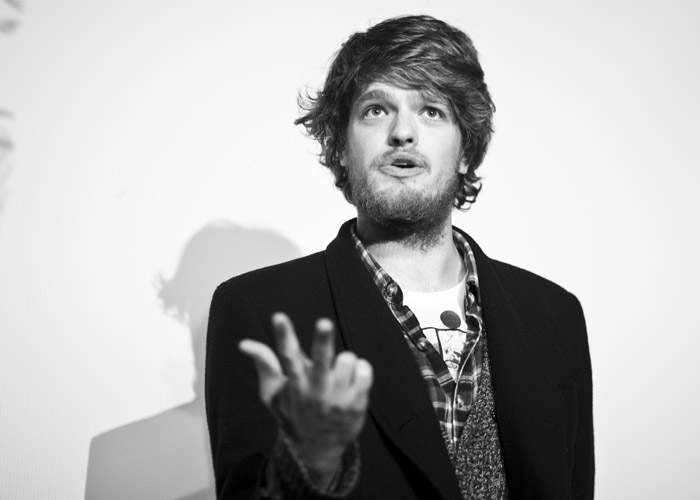 Rimestein is contrasted by the somewhat prophet-like appearance of Pieter Odendaal who arrives, in full beard and blazer, to grace the stage. Odendaal’s “Wilder as die Wildtuin: ’n Zapiroaanse Ballade” is a satire that makes verbal caricatures of actual authority figures by representing them as wild animals. Using puns and his characteristic lyrical depictions, Odendaal further engages an already engrossed crowd. As he speaks, his uniquely African, uniquely satirical humour receives generous amounts of laughter as he critiques the sheer quantity of “poeptaal” that people speak. 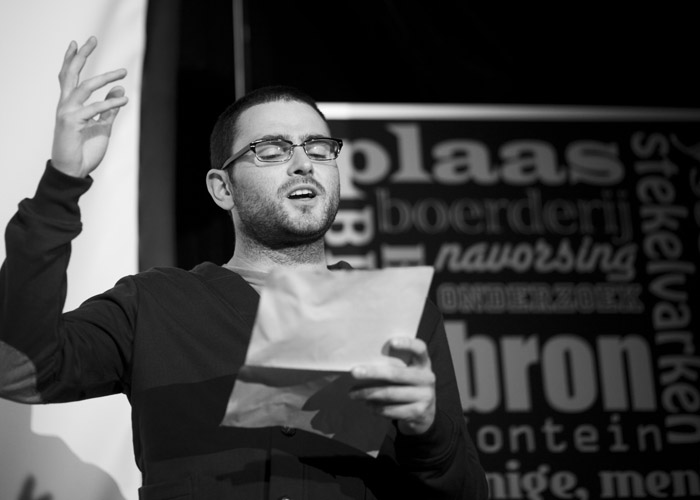 Loftus Marais is the act that follows. He uses the ubiquitous Zapiro image of the shower head as inspiration for his poem, referring to it as the “staal grys landblom” which has wilted and become listless. His performance is short, poignant and to the point. 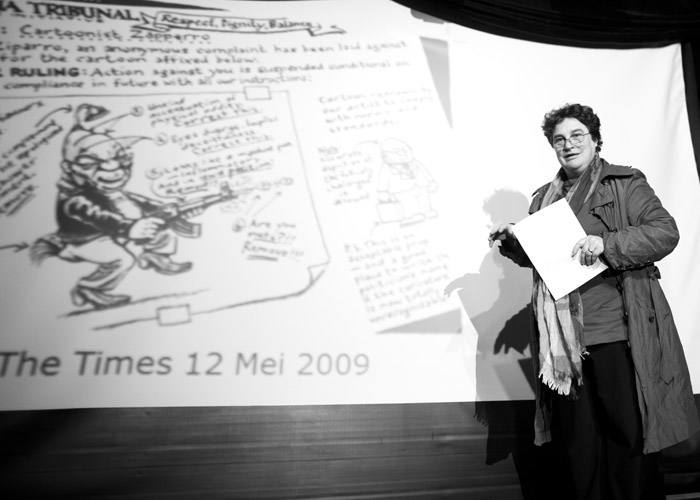 It is at this point that the unquenchable Marlene van Niekerk takes to the stage. She self-deprecatingly introduces herself as the old one amongst the youths of the evening, but her candescence is immutable. At various points she gesticulates towards the cartoon behind her that derisively and caustically represents politicians. Her poem is a sort of sardonic effigy that has a partly elegiac function. She calls into the imagination a number of recognisable South African political figures and sketches them in verbal caricature. With playfulness and brevity, she distinctly and comically critiques the failing of the system, delighting the audience with her unexpected foul language and frank observations. The earnestness of her speech not only elicits an emotional response from her captive audience, but also encourages introspection and critical musing on the state of the nation.

When van Niekerk finishes, she calls up Zapiro for the interview with the chant, “Aluta continua! Viva, Zapiro!”

Jonathan Shapiro joins Van Niekerk on stage and the two candidly and shrewdly discuss his career and personal life. There is no topic to which he will not respond openly and with good humour. Denying that he is a poet himself, Zapiro applauds the people who are sharing the stage with him on the night. He insists that the genuineness of the reactions he garners are sparked by cartoons that act as flights of fancy on the one hand, and gritty realism on the other. 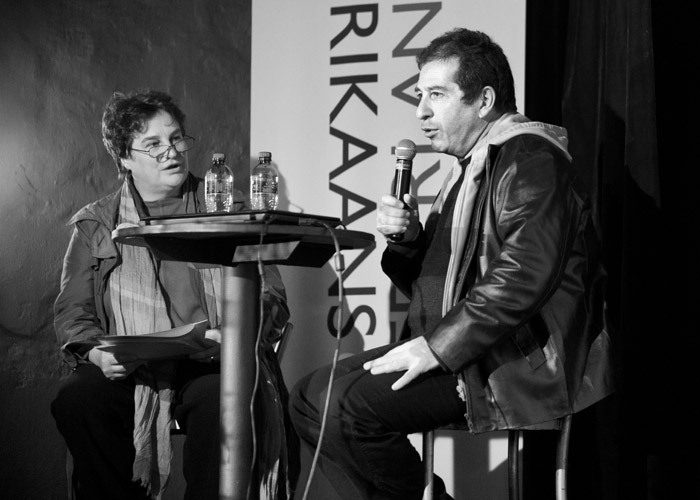 “Cartoons work in three ways,” he says. “We use exaggeration, hyperbole and the hypothetical ‘what if’ to get reactions.”

Van Niekerk leads Zapiro through the story of how dealing with monsters and bad dreams as a child manifested in his drawing pictures. She asks him about his his childhood, encouraging Zapiro to let his stories assume a biographical format. Zapiro tells the audience about his activist family and how his political activities for the UDF led to his imprisonment in 1989. Reflecting on an encounter with the police, Zapiro recounts how an officer once asked him: “Why do you draw us as pigs?” to which he replied: “I draw what I see.”

Drawing what he sees is certainly what makes Zapiro so popular, and his friendly, indomitable character is effervescent. Van Niekerk encourages Zapiro to speak about his time studying architecture in New York. Zapiro explains how architecture taught him to learn to draw things within a metaphorical frame; an important device that he still uses in his cartoons. He explains that developing a piece evolves from an idea that is born from trying to come up with something – some notion, image or gadget – that is convincing as visual parody. He adds that drawing is really the process of “tapping into something”. 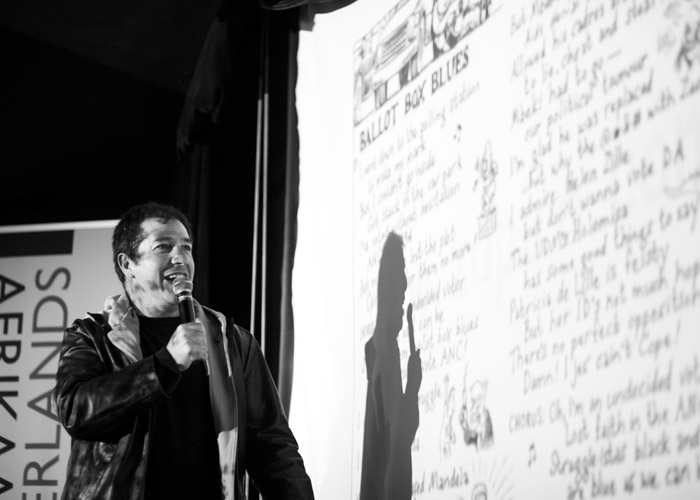 Zapiro describes his daily working process, offering an insight into what it takes to be as successful as he is, and describing some of the pressures of his vocation. He regales the attentive audience with tales of inadvertent mistakes, tracing the way he taps into things through his daily life. He reminisces, relays stories, and jokes, eliciting raucous laughter and applause when he stands up to sing the “Ballot Box Blues” for the full-house audience.

Van Niekerk challenges him with questions about hypocrisy and moral normativity; Zapiro responds with aplomb and dignity. He is candid and engaging in his conversation, and Van Niekerk is a worthy rallying partner. Her intellect and admiration for Zapiro are evident in their interview, and she guides the talk towards specific cartoons that have piqued public interest.

On the topic of his controversial depiction of the rape of Lady Justice, Zapiro describes the multitude of gasps that met the cartoon. Van Niekerk asks him, then, how he feels about this and other drawings that have attracted negative attention. “I stand by the sentiment,” he says pragmatically.

Finally, Zapiro delights the audience once more by adopting a very convincing Madiba persona and recounting the experience of being phoned up by the former president, for the simple purpose of complimenting Zapiro on his work. He portrays Mandela as witty, perspicacious and humble, concluding the interview and the story with the sage statement that Zapiro has critiqued, and shall continue to critique, those in a position of power and identify their shortcomings, because, as Mandela put it: “Oh, that is your job!” 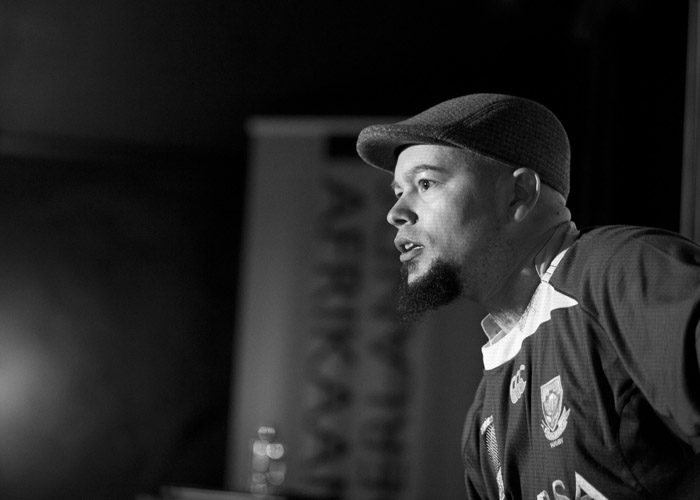 When the interview is wrapped up, thunderous applause follows Zapiro. Hemelbesem, the next performer, leaps onto stage to perform his piece. Dressed in a Springbok rugby jersey in front of a screen depicting the previous Bok coach, Pieter de Villiers, Hemelbesem tells the tale of “bruin krag” to much amusement and enjoyment. The penultimate poet, the renowned Antije Krog, regally mounts the stage and reads her two poems; both express the dark underside of satire. Krog stands straight-backed but troubled as she reads, her brow intensely furrowed as she explores the emotion and complexity of themes dealt with by Zapiro. Her second piece explores the conflicts and problems that pertain when a poet tries to write the “ubuntu-less” body. In her first piece, based on the image of the rape of Lady Justice, Krog’s standpoint is decidedly feminist. When she concludes with the accusatory “ons almal se broeke is oop/ons almal se ereksies wys”, an audible exclamation of “shoo!” is released from the audience. The last luminary to perform is Leon de Kock. He strides purposefully onto the stage with a newspaper under his arm and proceeds to jolt the audience with a piece that expresses, parodies and recirculates the dumbfounded “moral outrage” often experienced by readers of the Mail & Guardian. His piece, much like the Zapiro’s drawings, is intertextual, laconic, emotive and powerful. He insists that too much subtlety is unnecessary when explaining the dynamics of power, exclaiming “Ja, dis baie fokken duidelik!” De Kock offers a picture of Zapiro, as perceived by readers of his cartoons, as a problematic figure for the authorities, and for those who are complacent about the status quo.

With a final explosive expletive, De Kock stalks bodily off the stage and the audience, stunned and thrilled, give in to exhilarated applause.

A night with Zapiro as the catalyst is sure to rock a few boats, stir a few pots and inspire many a rant. As Marlene Van Niekerk phrased it: We will always admire the man’s pluck.