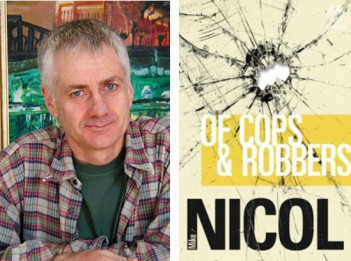 On the eve of the Open Book festival, where crime fiction masters Henning Mankell and Ian Rankin are to grace our shores, I enjoyed an evening with two of SA’s most celebrated krimi writers, Mike Nicol and Deon Meyer. Hot off the presses is Nicol’s latest krimi, Of Cops and Robbers (translated into hardgebakte Afrikaans by Jaco Botha as Dieners and Donners), and what follows is an hour of back and forth between two genial writers.

Much of the initial interview centres around Nicol’s upbringing and childhood, and his early exploits. With Nicol born in Tamboerskloof, the family drifted around, ending up in Fish Hoek. Nicol now lives in Glencairn, since “nobody with any integrity lives in Fish Hoek” (cue loud guffaws). Nicol tells how he used to make arrows from gramophone needles to shoot platannas and tadpoles until his parents made him go to the library one day. He checked out a book on caves in France, and reading became a “drug”. His interest in pirates shifted to cowboys and Indians and eventually to cops and robbers. As Nicol wryly notes, “we’ve come full circle”.

At his first job in one of old Johannesburg central’s tower blocks, Nicol the journalist fell afoul of the censors with a review of Dead Babies by Martin Amis. In subsequent years, Nicol would brush shoulders with John Vorster and Louis Luyt, ever-aware of the restrictions upon the free press. He would also spend time in the magistrates court, and he recalls how “hugely entertaining” it was to see people doing “bizarre things”.

At the age of thirty – his self-imposed horizon when a man would have enough life experience to write a novel – Nicol wrote a cowboy story. He realised that he could fill the pages with only half of what he would have had to otherwise by halving an exercise book. When Meyer jokes that Nicol should have gone into publishing, Nicol jokes that he doesn’t have the heart for it.

Since the 1970s, Nicol has published poetry, novels (including his magical-realism novel, The Powers That Be), a memoir of the 1994 elections,  as well as work on the Drum decade and Nelson Mandela.

The turn to crime fiction was to come while Nicol was taking up residency in Berlin. He had written 100 000 words, but “all of it was crap”. His wife suggested he read crime fiction, since the “pedestal” he was on couldn’t support him much longer. Having last read crime fiction when he was fifteen with The Saint, he eventually relented. He “loved the reading, loved the genre, and wanted to have fun”.

Since that fateful period, Nicol has of course offered readers the co-authored Out to Score (with Joanne Hichens), and his beloved Revenge Trilogy (Payback, Killer Country and Black Heart). When asked about his approach, he stresses the need to sit in a chair for long periods of time, until words flow forth.

The switch to crime fiction brought about twin anxieties of plot and character: Nicol mentions how the literary novel often has very little discernible plot movement, but that crime fiction requires carefully honed, meticulously executed plots. Characters should also have sufficient depth; it is simply not done to “discuss his characters’ eyebrows going up and down at a meal over the course of four or five pages”. Crime fiction writing is therefore “huge fun”, and “writing sentences with ‘kill’ in them is incredibly liberating”. I can only imagine.

When discussing Of Cops and Robbers, Meyer describes Nicol’s style as “by far the best in South Africa.” Meyer praises Nicol’s “deliciously complex” characters, and commends the author’s ability to create indelible scenes.

Nicol, in turn, says that he wanted to populate the novel with younger main characters, so he created PI Fish Pescado – the lean, mean blonde surfer who sells dagga to the upper middle-class; and compulsive gambler Vicki Kahn – beautiful, exotic, feisty. He needed to “suppress” the protagonist, and therefore included his over-bearing mother to keep tabs on him (from London). Nicol notes that he is “fighting over territory, cornering bits and pieces” of Cape Town along with Meyer and Margie Orford, so he based the action in Muizenberg.

The novel generates tension through the interplay and movement between present and past, a past that chronicles a hit squad known as “The Icing Unit”. A bergie travelling from Stellenbosch to Muizenberg with his manuscript made it into the novel, along with various other historical events and persons that Nicol was to fictionalise: The disappearance and hording of gold bullion (shipped to Switzerland by paranoid National party heads) and the contingent, mysterious “RAU TEM” murders of National Party MP Smit and his wife; the Miss Landmine beauty pageant held in Angola, where the winner receives a Scandinavian-made prosthesis; the interception and killing of the Cradock Four, and the murder of Dulcie September in Paris. The way Nicol appropriates history and politics raises interesting questions about form.

Meyer comments that we “don’t really know who the cops and who the robbers are” in present day SA. Nicol responds that he initially felt the atrocities under apartheid couldn’t repeat post-apartheid, yet “Things happen here in a week that haven’t been seen in Finland since the Vikings!”

I could tell you more about what was said about Epsom salts, and how “history leaps out at you walking down the aisles of Pick 'n Pay”, Nicol as a “closet Afrikaner”, and how the last line of Black Heart was written six years before the novel itself, but you really had to be there yourself. After reading Of Cops and Robbers I assure you that the genre is in good hands.