Afrikaners not so rigtingbedonnerd after all 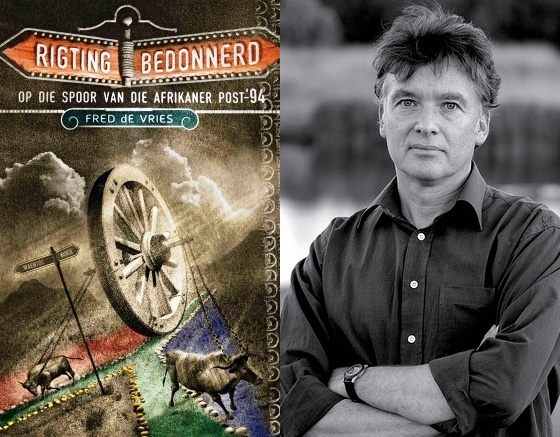 The crowd gathered at The Book Lounge for the launch of Fred de Vries’s collection of interviews with prominent “Afrikaners” is a surprisingly diverse lot, unlike the subjects of Roelof Petrus van Wyk’s recent representations of young Afrikaners. Tonight De Vries is in conversation with Dana Snyman, author of The Long Way Home (2012), in which Snyman explores the idea of an Afrikaner Nkandla, a psychological home for the Afrikaner in South Africa.

Johan Hugo of The Book Lounge welcomes the audience in Afrikaans before he announces that the discussion will in fact be taking place in English. Picking up on the irony of this situation, Snyman begins the interview by apologising for his English, “like a good Afrikaner”. He jokes that at the age of 13, the only English words he knew were “Mobil” and “Ford”. He confesses that it feels strange to be interviewing a “Dutchman” in English, “a couple of kilometers from Jan van Riebeeck’s fort”. De Vries admits that he would prefer to speak Dutch, but English is a good compromise, since it is “neutral ground”. With the linguistic medium thus firmly foregrounded, Snyman probes the subject of De Vries’s book: “Why the Afrikaners?” he asks.

De Vries responds that growing up in the 1970s in the Netherlands, the image he had of Afrikaners came from television: “Policemen beating up black protesters and Afrikaans farmers saying they will never surrender to the ANC.” The dichotomy was clear – blacks were good, whites were bad, and Afrikaans was the language of the oppressor. “We had never heard of the Boer War, and our image of Afrikaners was of people who had come to South Africa in the 17th century and degenerated into a racist bunch.”

De Vries arrived in South Africa in the early 1990s. His wife was a diplomat, and they lived in Verwoerdburg (now Centurion), which was very conservative – he describes it as a space of pre-fab wagon wheel walls and decorative windpompe in the front gardens. The audience titters.

Because he was unemployed, De Vries continues, he spent his time reading. He recalls how he kept falling asleep while reading Allister Sparks’s history of South Africa, and how he would venture out to the Centurion Mall when he got bored, and people-watch: Afrikaner women with perms, men in khaki, with combs tucked into their long blue socks. “In 1992?” Snyman asks, doubtfully, but De Vries is adamant.

De Vries then recounts how he began to make friends with left-wing Afrikaners, mainly in the music and literary scene – associating with the likes of Koos Kombuis and Paul Riekert of the industrial music project, Battery 9. Snyman interjects to ask whether De Vries found it easier to get to know less mainstream Afrikaners. De Vries replies by describing his first few experiences going to a typical South African braai: “The men would stand around talking about rugby and hunting, while the women made potato salad and sat in a circle drinking white wine.” Compared to these people, the more alternative Afrikaners were “quite wild”, jumping naked into swimming pools and smoking dagga. 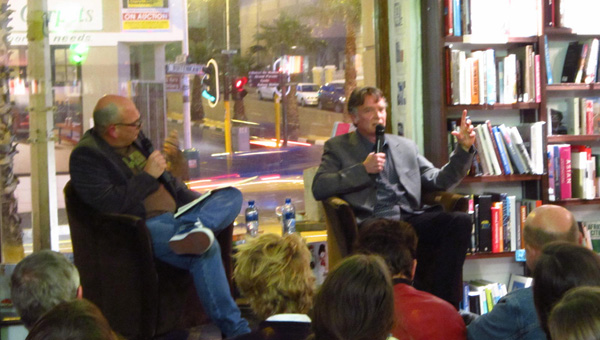 Snyman probes De Vries about his time in the Free State town of Vrede, asking about the way in which the reality of Vrede is woven through the interviews in the book. De Vries recounts the “dream” of their house in Vrede, intended as a weekend getaway an hour and a half from Johannesburg. However, the reality was not like the dream, and De Vries found it hard to get accepted into such a small community. He remembers how the waitress at the local restaurant would announce their arrival by shouting to the people in the back room: “Dis die Engelse!” This made him feel like an outsider, he was seen as one of the “English”.

Discussing how Rigtingbedonnerd came about, De Vries says he realised he couldn’t focus only on Afrikaner musicians and artists. He decided to do a “big” book, motivated by the question: “How do you deal with going from ruling a whole country to ruling Orania?” For De Vries, the Afrikaans word “rigtingbedonnerd” (which suggests a person who has no sense of direction) had a wonderful resonance, since “bedonnerd” in Dutch means to be cheated. The word thus has a dual valency: Afrikaners feel cheated, and they do not know where the country is going.

Snyman interrupts to ask whether De Vries thinks the Afrikaner is indeed rigtingbedonnerd, and De Vries replies that most of the interviewees, “except those who had emigrated to Australia”, seemed to have a strong sense that there is indeed a future for whites in South Africa. Furthermore, “except for Dan Roodt”, there seemed to be a desire amongst most of the interviewees to accommodate others.

“What about the coloured people?” queries Snyman, referring to critiques levelled at De Vries for not including the voices of coloured Afrikaans South Africans in his book. “Coloured people are not the same as Afrikaners,” answers De Vries. “Their whole background is different from white Afrikaans speakers. To suddenly include them as Afrikaners after excluding them under apartheid seems a bit hypocritical.”

Towards the end of the interview, Snyman asks De Vries whether, during the writing of the book, there was ever a moment where he felt gatvol of Afrikaners and wanted to give up. De Vries notes that Afrikaners tend to have a sense of exceptionalism: “They often think they’re too special.” He offsets this comment by mentioning that, internationally, people seem to have lost interest in South Africa since 1994, “they’re not interested, South Africa seems fine now”. Have things changed since he arrived in South Africa in the 1990s? Yes, De Vries affirms, Afrikaners are now more open to the outside world. He cites the expansion of Naspers and Shoprite Holdings as examples of Afrikaner growth and concludes: “They have caught up quite quickly with the rest of the world.”

And I just read the book and I think it’s excellent.

I think neutral in this specific situation only means that Englsih is not the mother tongue of Fred de Vries nor of Dana Snyman.
That’s all…….

English neutral? Whatever the reasons, convincing or not, for choosing English, it is definitely not neutral. How can people possibly lose sight of the history of the British Empire and the current American/Anglo-Saxon cultural, political, military and economic hegemony, and call English neutral? However often I hear and even get used to this sort of reasoning, it remains thoroughly astounding to me every time.