SECOND TAKE REVIEW: Jonathan Amid takes another look at Margie Orford’s novel following the flurry of commentary and counter-commentary about crime fiction and so-called ‘genre snobs’. 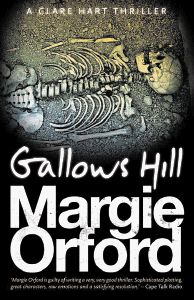 How to read local crime fiction has, over the past week on SLiPnet, generated debate of such a multi-stranded, divergently convincing nature that one can at least be sure of one thing: no single pronouncement can be taken as self-evidently superior. Clearly, the critical game itself is a contest of detection: while “genre snobs” may see little more in SA crime fiction than reiterations of “stock” tropes invoking spectres of corruption, moral decay and “criminal” wrongdoing against an unstable middle-class order (trite clichés served up as social gruel for a gated bourgeoisie pigging out on superficial “entertainment”), “genre loyalists”, and certain critics, claim to see more. They certainly all see it very differently. And maybe that's the real point. The play of critical meta-detection is, perhaps, what it's really all about, on the literary-critical level of engagement.

As Leon de Kock suggests, crime fiction persistently exceeds its generic parameters. Crime writers each have their own formal and stylistic stamp. No single work in the “genre” is free of influence or is entirely original, and crime/thriller writers all the way from Kerneels Breytenbach in the south to Diale Thlolwe in the north are mining the form in an increasingly sophisticated play of style and content, convention and subversion.

Any attempt at critical analysis must, then, move beyond throwaway lines like “clever plot-twists”, “credible characterisation”, “interesting insights into the criminal mind”, or, most susperficially, "appalling revelations of the crime epidemic", to engage with responses such as Kavish Chetty’s to Lynda Gilfillan’s original criticism of the so-called “genre snobs". Chetty argues that Gallows Hill appears to explore “themes ... within the broad collision of a very familiar and curtailed set of circumstances”.

In my view, Gallows Hill stages a complex, detailed collision of history and politics in Cape Town. Orford frames her novel with Faulkner’s assertion that “[t]he past is never dead. It’s not even past”, and she charts the way crime functions in interstitial spaces, mapping its extra-juridical excess in sites of historical importance. So yes, the circumstances of thematic exploration might be both “familiar” and “curtailed”, but Orford gets a pass because she occasions this “collision” in a three-dimensional way. Orford successfully intertwines the history of slavery and hangings at the Cape with late-apartheid activism, state-sponsored atrocities, and an unsolved murder amid venal postapartheid conditions.

Are these thematic strands merely gratuitous? Does the novel use history mainly in service of a commercial genre? Can it really be that simple? Readers – and critics – must decide by submitting these texts to conceptual analysis.

Briefly, this is the story: the death of a Cape Town vagrant, Eva Afrika, leads to the accidental discovery of a mass grave of VOC-era slaves near the site of Gallows Hill, just above the city centre. On top of these very old skeletons, a more recent box is found holding the bones of a woman who is found to have been murdered in the late 1980s. The novel’s action interlinks these three layerings of space and time – pre-apartheid, grand apartheid, and postapartheid – creating temporal and spatial complexities in the midst of generic “thriller” elements.

The undead past keeps tugging at the living now, a present which – like the past – is a place of quotidian horrors. The novel thus conjoins a focus on historical and modern-day sites of exploitation, blending factual and imagined fragments that span Signal Hill and the Cape Castle, the Slave Lodge and Parliament. Rather than accelerate the action, as is common in the genre, Orford often chooses to stop and reflect on small, apparently unimportant moments, giving voice to marginalised people and spaces.

Orford excavates various murders with minimal flash and maximum emotional heft. The novel’s second half sees a shift to Johannesburg, and the novel covers more intimate ground as it unpacks the “terminal intimacy of murder” (188). This phrase embodies the novel’s rather intimate but harrowing focus on the paradoxical nature of violence. The book’s tales of cruelty are related in a way that is less clinical, and more personally resonant, than one will find in the average stock thriller, without exaggeration for the sake of genre.

Gallows Hill transcends overly generic writing about trauma to female bodies through a genuinely empathetic evocation of character, event and their particular relation to historical and political conditions. One such passage of writing sees Clare tracing “the marks of childbirth grooved into the back of the dead woman’s pelvis”, trying to imagine “the interminable waiting that ossified into a perpetual sense of loss” (49). Gallows Hill uncovers a surprising frailty, a strange beauty blossoming in death. Delicate but disturbing descriptions of a child’s skull with “cranial bones like white petals”, and femurs that resemble “fossilised driftwood” (18, 23), reveal a move away from Orford’s more graphic, occasionally sensationalist earlier works.

What Orford’s narrative requires from the outset – to counter the violent march of history at the Cape – is for her victimised female characters to attain agency and offset the “perpetual sense of loss”. Amid material conditions of violence, the reader is drawn into relationships between the book’s main characters. Such forms of empathetic affiliation help to elevate Gallows Hill above stock – or schlock – genre output. It’s also often a funny novel, with many touches of sophisticated wit about life in contemporary conditions. And it’s a love story, too, involving complexly drawn characters who inhabit the late-modern world of postapartheid South Africa.

Gallows Hill carves out a stylistic middle ground between sensation and realism, its “foetid gloom” (72) artfully mediating between past and present. The novel is engaging, nuanced and socially conscious without slipping too quickly into the constricted modes of either “protest” literature or purely “genre” writing. The novel is notable in that it simultaneously manages to satisfy the basic tenets of its form, “plot, character, action, resolution, and some good sex”, while surpassing what the average reader might expect. It looks and feels like a thriller, but it stands its ground as a work of good writing: intelligent, questing and embodied.

Hi Kavish, glad you found it enjoyable. I found your comment a useful segue into the discussion, so permit me that small oversight.

While I’m embarking on a PHD on local crime fiction soon, and I do find much that is quite complex about the local take on the genre, I endorse your view of the local crime cinema to a large extent. It is rather embarassing to think that a film like 31 million reasons could get widespread distribution, let alone be punted.

Then there’s a new (crime-driven) film by Angus Buchan of all people on its way, which might make the frightening “Platteland” and the like look like Fellini. The mind boggles…

Also, am I allowed to slyly self-promote here under the pretence that this brief essay on the problems of SA crime/genre cinema shares much in common with my intuitions about SA crime fiction?:

Thanks for an enjoyable review.

Just one correction: I haven’t actually read Gallows Hill, so I won’t make the explicit accusation re – the “familiar and curtailed set of circumstances.” That was more a reply to particular phrases used by Gilfillan in her defence (“apartheid surfaces like a recessive gene” amongst others), and also a general statement about local crime cinema and other more (perhaps) unrescuable crime fiction I’ve glanced through recently – like Nicol, this dude Tony Park etc.

But thanks for being specific, because too often these genre debates get dragged into abstraction, trying to make wholesale redemptive appeals which are better occasioned – as yours – through particular literary analysis.