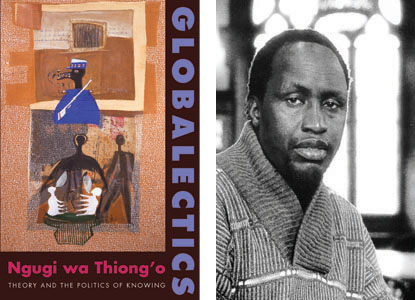 This book contains four Wellek Library Lectures in Critical Theory, delivered by Ngũgĩ wa Thiong’o in 2010 at the University of California, Irvine. Ngũgĩ coins the title of the book, Globalectics, from “globe” and “dialectics” to theorise exchanges between and among nations and cultures. “Globalectics combines the global and the dialectical,” he writes, “to describe a mutually affecting dialogue, or multi-logue, in the phenomena of nature and nurture in a global space that’s rapidly transcending that of the artificially bounded, as nation and region.” (8) For him, “[G]lobalectics embraces wholeness, interconnectedness, equality of potentiality of parts, tension, and motion” hence providing a useful way of “thinking and relating to the world, particularly in the era of globalism and globalization.” (8)

The first lecture, “The English Master and the Colonial Bondsman”, is a reflection on how English literature was taught in colonial East Africa, specifically at Makerere University, Uganda, where he was a student from 1959 to 1963. At this time literary works – the novels of Charles Dickens or the plays of William Shakespeare for instance – were presented in a mono-perspectival way that detached them from concrete realities of a colonised country like Uganda or Kenya. While at Leeds University between 1965 and 1967, Ngũgĩ was introduced to the work of Karl Marx, which changed the way he read. Marx’s dialectical materialism, alongside encounters with thinkers like Aime Cesaire, Frantz Fanon and Jean-Paul Sartre, releases him from “a one-dimensional view of reality” (20) and opens texts up to new realities and complexities, making it possible for him to see “the infinite beauty and complexity of the English text.” (21)

In the second essay, “The Education of the Colonial Bondsman”, Ngũgĩ goes further to demonstrate how the negative attitudes the West has towards Africa and Africans have a long history of distortion in western discursive practices. Suffice it to mention that Dorothy Hammond and Alta Jablow have studied this tradition at length in their landmark work, The Africa that Never Was: Four Centuries of British Writing about Africa (Waveland Press 1970, revised edition 1992).

The third essay, “Globalectic Imagination: The World in the Postcolonial”, draws a lot from Goethe’s call for a weltliteratur (world literature). Here, Ngũgĩ argues that since literature is inherently transnational and dialogic, it should not be imprisoned within national boundaries. Readers need to approach texts with openness so that they get as much from it as possible as they look at both the here and the there, the local and the global, the national and the world. In line with this view, he re-reads the 1967 document he co-authored with Henry Owuor Anyumba and Taban lo Liyong, “On the Abolition of the English Department”, as an attempt to release the study of literature from purely nationalist boundaries that colonial and neo-colonial Britain championed, and opening it up to dialogue and conversation with other literatures from different parts of the globe.

While Ngũgĩ does not mention Apollo O. Amoko’s article “The Problem with English Literature: Canonicity, Citizenship, and the Idea of Africa” (2001), it is clear that part of what he does in this essay is to respond to Amoko, who argued that the Abolition document was both revolutionary and retrogressive. While it “successfully uncoupled the question of aesthetic value from the question of Englishness”, it “sought hurriedly to substitute a discourse of authentic ‘African-ness’ for a discourse of alien ‘Englishness’ as the condition for existence for appropriate literary education in African universities”, thereby representing “a reactionary instrumentalization of the aesthetic and an ironic affirmation of the idea of Africa invented by the colonial library.” (22)

The final essay, “The Oral Native and the Writing Master: Orature, Orality, and Cyborality”, revisits the language debate on which the 1986 book, Decolonizing the Mind: The Politics of Language in African Literature centres. The language question has since become a contentious issue, drawing responses from several critics including the venerable Chinua Achebe. In his 2009 book, Education of a British-Protected Child, Achebe wrote: “Theatricalities aside, the difference between Ngũgĩ and myself on the issue of indigenous or European languages for African writers is that while Ngũgĩ now believes it is either/or, I have always thought it was both.” (97). Well, Ngũgĩ has since softened his stance on this issue by returning to English language. His critical essays (for instance this very book I am reviewing) and memoir, Dreams in a Time of War (2010), are written in English despite his declaration, in 1986, never again to write in this language. Simon Gikandi has discussed this “return” in an illuminating 2000 essay entitled “Travelling Theory: Ngũgĩ ’s Return to English”.

Like many of Ngũgĩ ’s essays, the book is a castigation of autocratic postcolonial states and intellectuals’ complicity with neo-colonialism, for instance through their continued use of European languages. But there are some new things he does in the book, as I have hinted above. I will mention just four. First, he demonstrates that the way we read literary texts can make them monologic (thereby foreclosing dialogue with other cultures) or dialogic (thereby opening it to other traditions). Secondly, he affirms the transnational nature of literature especially in its building of a global human family that can talk with and learn from each other. Thirdly, his theorisation of a globalectic aesthetic frees literature from both nativist and nationalist jingoism since it calls for “the mutual containment of hereness and thereness in time and space, where time and space are also in each other”. (60). Finally, by developing a new concept – cyborality – to capture both oral and written aspects of literary art in a world that is increasingly becoming virtual, Ngũgĩ shows himself as a hardy scholar who is ready to adapt to new realities. It is in this hardiness, I suggest, that we should locate Ngũgĩ ’s return to English by reading it as demonstration of his willingness to dialogue with different cultures even in a language he had hitherto abandoned.