The book is divided into nine sections, each addressing particular issues related to the topic of African sexualities. Framing essays by writers such as Sylvia Tamale, Jane Bennett, Desiree Lewis, Nkiru Nzegwu, Beth Maina Ahlberg and Asli Kulane, Kopano Ratele, Stella Nyanzi, Chimaraoke O. Izugbara, and Mensah Prah introduce each section respectively. These framing essays are so seminal or provocative that each calls for its own review/discussion. In fact, this is true for most of the contributions in the book, which is hefty reading at 656 pages.

From the outset, the title of the Reader establishes sexualities as pluralised, thus dismantling the dominant ideology of heterosexuality. It also captures the complexity of the topic at hand, for the concept of African sexualities encompasses a variety of sexual orientations.

This is one of the things that makes the Reader alluring: it does not present a homogeneous, monolithic position on sexualities. Its contributors belong to different sexual and philosophical orientations: some, like the editor, are heterosexual and happily married; others are gay, lesbian, transsexual, and transgender. 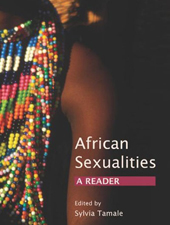 This is as it should be, for as the World Health Organisation puts it in a report entitled Defining Sexual Health, sexuality is experienced and expressed in different forms – “thoughts, fantasies, desires, beliefs, attitudes, values, behaviours, practices, roles and relationships” — that are influenced by “the interaction of biological, psychological, social, economic, political, cultural, ethical, legal, historical, religious and spiritual factors” (WHO, quoted in chapter 59, Reader).

At the launch of the book at The Book Lounge in Cape Town on 11 October 2011, the editor, Professor Sylvia Tamale, revealed that the title is meant to “tantalise, stir and awaken, to take you to another level of awareness where you start thinking about sexuality and asking yourself: Is there such a thing as ‘African Sexuality’, let alone ‘Sexualities’?”

I certainly found the book to be “tantalising” in the sense that it kept me in a state of expectancy from beginning to end. By the time I reached page 656, I could only take a breath and gaze at the Reader with a sigh: “What a book you are! You are both edifying and unsettling.”

The Reader is edifying because there is so much to learn from it, what with the many theoretical perspectives, research findings, and polemical stances it contains. But it is also unsettling because some of the issues brought to light are frighteningly brave. I will give an example. In a life story that I wish were fiction, Everjoice J. Win gets rid of the uterus that she finds bothersome and enslaving. Entitled “Ode to my Uterus,” she gives us a first-person account after the deed:

So here you are. Lying all dead and shrivelled in a jar of formaldehyde. [. . .] We have had a long 41 years together, you and I. I no longer want to be defined by your presence. [. . .] So, dear uterus, rest in peace. I can’t say I am going to miss you, because I definitely will not. I look forward to living out the rest of my days without being reminded of your presence every month. More than anything, I am now a free agent. The rest of my body belongs to me. Nobody is going to get a cut from you, my little reproductive machine. (375-376)

I find this conception of freedom disturbing. Perhaps it is her poetic style that makes me feel so sorry for her helpless uterus: by giving it human attributes of hearing and understanding as her addressee, Everjoice’s “revolutionary” act strikes me as wanton, especially when we remember that there are several other ways the “little productive machine” could have been stopped from reproducing. But Everjoice is an emancipated subject with absolute freedom over her body; so uterus, rest in peace.

The book is revolutionary in many ways, but perhaps most importantly it lifts the shroud on the deity called sexuality. Unveiled, sexuality is presented to the gaze of the reader without any qualms about blasphemy. In a sense, the book makes das Unheimliche of sexuality become das Heimliche. That which has been hidden, or discussed in whispers, is exposed and demystified.

One of the strongest points of the Reader is the intensity and profundity of theorising, especially in the framing essays. Sylvia Tamale, for instance, gives a deep analysis of research on sexuality in Africa, showing how it has been approached by different interest groups — missionaries, colonialists, imperialists, patriarchal governments, etc. Jane Bennett does a related analysis in the area of activists’ subversion of and resistance to monolithic sexual regimes. Desiree Lewis uses postcolonial discourse to demonstrate how western/Eurocentric/US-centric conceptions of Africa are not only sometimes misleading but also racist.

Another area that is re-theorised, is the issue of female genital mutilation (FGM). It turns out that FGM is not always and already a mutilation or a patriarchal imposition on women. On the contrary, some of the practices that have been lumped together in the category “FGM” are modifications, not mutilations, and they are sometimes voluntarily undertaken by some women to enhance their sexual pleasure or that of their partners.

In an insightful essay that anti-FGM crusaders need to read carefully, Brigitte Bagnol and Esmeralda Mariano write: “Some women modify the diameter of the vagina, its temperature, lubrication, humidity and consistency through steam baths, smokes and application or ingestion of various preparations” (271). In an endnote, they report something that will surprise many white South Africans: “Anecdotal accounts suggest that some white South African women are getting in on the act [of manually elongating the inner folds of the labia minora to create the culturally approved organ modification, which is deemed sensuous and critical for enhanced sexual pleasure] in order to keep their men from crossing racial lines” (267). Clearly, the Reader challenges us to discover issues that might seem too “archaic” to interest modern and postmodern people, some of them carrying Master’s and Doctoral degrees.

There are also some humorous (albeit serious) chapters in the Reader. One of them is entitled “Ob/Gyn Experiences – Life Stories”. It is a list of twelve experiences compiled by the editor, Tamale. “In more ways than one, the relation between gynaecologists and their women patients is quintessentially one of power,” she writes in her introduction to this chapter. The first of these stories  presents us with a lady called Mumbi (not her real name) whom a male doctor asks while at his job, “Did you know that you have grey hair?” Imagine that!

“How old did you say you were again?” another male doctor asks Ndanatsei, who has spread out her legs as much as she can, making her wonder if the question has been raised because she “looked older or younger down there”.

The Reader is encyclopaedic in its coverage of African sexualities, and the range of issues raised is admirable, with very insightful contributions from different parts of the continent. Karim Mahmoud Tartoussieh gives us an illuminating essay on “clean cinema” in Egypt – a genre that requires “a reconfiguration of the cinematic bodies of artists (especially female artists) to fit within a normative religio-ethical project” (218).

From Uganda, we have the experience of Julius Kaggwa, Director of Support Initiative for People with atypical Sex Development, who lived the first 17 years of his life as a woman, having been “born with an atypical body anatomy close to 40 years ago” that made her/him “a victim of emotional blackmail” — a story that reminds the reader of Herculine Barbin, the 19th century French intersexual who eventually committed suicide.

Sally Gross, a South African Jew born intersexed, gives a chronicle of her life, specifically the legal activism in which she has been involved. She observes that the public needs to be educated about intersex as “part of the fabric of human diversity and not a threat, a rights issue and not pathology” (236). Indeed, the definition of the term “intersex” given in the Oxford Dictionary of English (2010) as “the abnormal condition of being intermediate between male and female; hermaphroditism”, indicates the extent to which intersex is still inscribed as an abnormality.

Despite these strengths there are a few shortcomings in the book. Firstly, heterosexuality seems to be marginalised in favour of other sexualities. This is understandable, given that one of the aims of the book is to dismantle what Adrienne Rich called “compulsory heterosexuality”. However, it does make the book seem activism-oriented. Of course there is nothing wrong with this, except that it gives the feeling that heterosexuality is “guilty” of something – of suppressing other sexualities, if you like.

Secondly, there are cases where some contributors are blatantly biased. In the ob/gyn experiences I have referred to above, all twelve experiences portray “bad”, unethical male gyns. Surely there must be accounts of “a few good men” out there?

Finally, the Reader does not provide a note on the contributors that would have helped readers to follow up on the work (and biography) of their favourite contributors.

These shortcomings are of course nothing when compared to the wealth of information presented in the Reader, and I commend Tamale for enriching the African library with a book that is destined to change the way we talk about and teach sexualities in Africa. Indeed, the last section of the Reader offers pedagogical approaches to the teaching of sexualities both at school and in communities. The book will certainly change the way some people experience sexuality, for instance by encouraging those in “hiding” to open up and embrace their sexuality the way contributor Kipkemboi [Jeffrey Moses] did.

In 2003, the readers of Uganda’s leading daily, New Vision, named Sylvia Tamale, at that time an associate professor of law at Makerere University, “the Worst Woman of the Year” for suggesting to the then proposed Equal Opportunities Commission, in her status as a lawyer, that the term “minorities” should cover lesbian and gay citizens of Uganda. Reading African Sexualities: A Reader,  it becomes clear that the woman they vilified as a moral degenerate is a great humanist who is using her scholarly talent and calling as a lawyer to give hope to the millions of people on the continent who are being oppressed for embracing who and what they are, sexually.