Academic Freedom and the Critical Condition of the Humanities 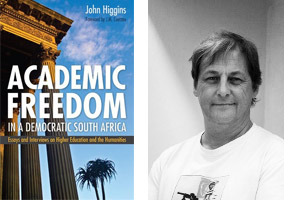 Academic Freedom in a Democratic South Africa: Essays and Interviews on Higher Education and the Humanities by John Higgins, Johannesburg: Wits University Press, 2013.

Intellectual dissatisfaction is the default position of the scholar, observes Stefan Collini in his 2012 book What Are Universities For? The defining function of the scholar in society is to question and reflect: not just to discover or produce new knowledge through new research, but to examine how that knowledge has been discovered or produced and how it might or is being practically applied beyond the university; and if that knowledge does not seem immediately or strictly useful or applicable, then to think again about the difference between “usefulness” and “value,” “knowledge” and “understanding,” the acquisition of technical expertise and the ability to be an active, critical citizen – one who is able to question and reflect on how things actually are but could be otherwise. This is the core set of issues, framed by the larger question of the social value of academic freedom, that John Higgins engages with in the five essays and three interviews collected in Academic Freedom in a Democratic South Africa.

The essays originate from diverse occasions: Conor Cruise O’Brien’s controversial visit in 1986 to the University of Cape Town; Higgins’s experience as a member of UCT’s Academic Freedom Committee (1987-1996) and editorship of Pretexts (1989-2003); his participation in a workshop and conference in 2004/5 addressing the National Research Foundation’s (NRF) bias towards funding research projects in science and technology at the expense of the humanities; his role as a reviewer of managerial culture at the University of Pretoria for the Council of Higher Education; a commission by the Academy of Science of South Africa to investigate the state and future of the humanities in South Africa. The interviews with Terry Eagleton, Edward Said, and Jakes Gerwel that round out the volume give a personal and comparative inflection to the essays’ arguments about how the restructuring of higher education in South Africa conforms to trends in higher education in Britain and the United States.

In the essays Higgins’s approach is scrupulously self-reflexive. The essays typically begin with or hinge in some crucial manner on the skill of critical analysis, examining how the phrasing of a problem is often loaded with a problematic bias or assumption. For instance, in Chapter 1 he deconstructs a BBC television report’s “narrative image” of the O’Brien affair, highlighting omissions of context. In Chapter 3 he highlights the compromised phrasing of statements that set the terms of discussion for problems in higher education: for instance, a document that called for participation in a NRF workshop to examine why the social sciences, humanities, and law have “trailed behind natural sciences in the quest for better understanding of the contemporary world” (77); or, another example, the founding formulation of the NRF:

It is generally accepted that the capacity of a country in science and technology is directly related to its potential for development and progress and for promoting the quality of life of its people. (82)

This formulation echoes but lacks the famous irony of the opening sentence of Austen’s Pride and Prejudice (“It is a truth universally acknowledged that a single man ...”), and it is Higgins’s act of critical analysis that lays bare the assumptions written into the language in which the problem is posed. In Chapter 4 Higgins makes overt his intellectual debt to Raymond Williams’s example in “extending the powerful analytic tools [Williams] developed in the study of literature to the broader processes of cultural and political life” (103), specifically in this chapter by tracing the “historical semantics” of the keyword “institutional culture” (103). This intellectual debt is important since, as with Edward Said, it is impossible to extricate Williams’s political from his intellectual activism: critical literacy – learning how to analyse, contextualise, interpret ideas and representations for what they say and do not say, whether in a novel, political speech, slogan, film, or some other medium – is indispensable for critical citizenship. Finally, in Chapter 5, “Making a Case for the Humanities,” Higgins focuses on problems of statement and address in “making a case” for more funding for the humanities, pointing to the cautionary precedents of the 1998 Australian Academy report’s failure of address in offering a statement too self-confirming of the value of humanities study and the 2004 British Academy report, which struggles to get beyond the problem of stating the problem of how to quantify the “impact” of research and measure the translation of skills learned at university into occupational work.

For policy-makers with a predominantly instrumentalist, market-oriented view of higher education, it makes sense to boost the economy through channelling funding to the STEM disciplines (Science, Technology, Engineering, Mathematics) at the expense of disciplines in the social sciences, law, and the humanities. But Higgins is at pains to emphasise that particularly in a youthful democracy, to divert funding from the humanities is to compromise the “socialization of enlightened, responsive and constructively critical citizens” (84), which the 1997 Programme for Higher Education Transformation specifies as an imperative goal of South African higher education.

Critical citizenship, Higgins reminds us, begins with basic literacy, learning the technology of reading and writing. That writing is a foundational technology is easily forgotten, just as it is easy to overlook the contribution of the NAIL disciplines (those that teach narrative, analysis, interpretation, visual and verbal literacies) to a society that measures its health in strictly economistic terms. But what is not easy to overlook in South Africa today are some of the legacies of apartheid: the divisive force of binary and instrumentalist thinking, how daily life demands sensitivity to linguistic and cultural difference, how the dire, lingering deficit in basic literacy sits uncomfortably with an escalating need for skills in the advanced literacies of visual and digital communication and interpretation. Higgins’s arguments for the vital role of the humanities in higher education are strongest when he explains (as he does best in Chapter 5) how neither basic literacy nor grounding in the STEM disciplines will by itself produce citizens critically literate and self-aware.

As a collection of “occasioned” (2) pieces there naturally remain some gaps and overlaps among the essays in this book. Higgins usefully prefaces each essay and interview in Academic Freedom with a sketch of the circumstances of its beginnings. These prefaces, along with liberal references to earlier of his papers containing incarnations of his current arguments, give a strong impression of how long the author has been thinking and publicly discussing and writing about these ideas. But this recurrent emphasis on how his ideas have developed in stages over the last two decades through different occasions comes at the cost of fluid continuity from chapter to chapter. Thus there is some overlap among chapters where not just the contours of an argument are reproduced but the footwork of quoting and discussing the same bits of text – for example, the tension in the definition of the purpose of higher education in South Africa on pages 84 and 122. At these moments some deft paraphrasing and cross-referencing would have been welcome. Similarly, in the interest of streamlining the listing of sources, it might have been worth compressing the bibliographies at the end of each chapter into a single bibliography placed at the end of the book.

The Foreword, presented in the form of a letter to Higgins from 2003 Nobel laureate J.M. Coetzee, together with the interviews later in the book, captures the spirit of Higgins’s work insofar as his arguments have been refined through numerous, particular conversations with people situated at different angles to the institution of the university in spaces ranging across workshops, conferences, committees, the university classroom, interviews, and public lecture venues. Moreover, collegiality as a spirit of conversation across boundaries is an important strand of his argument about the role of the humanities in fostering an ability to engage in critical dialogue across disciplines and sectors of society – in this case, a dialogue among all the stake-holders in higher education, from government through the private sector, independent funders, public intellectuals, academics, and administrators. Coetzee’s letter, framed as Preface, carries the approving air of an endorsement, yet Coetzee’s view of the future of the humanities is more pessimistic than Higgins’s. Coetzee gives two reasons for his pessimism: one, that universities have a poor record of defending their preferred status as autonomous institutions by being prepared to “starve” (xiii) for their beliefs in the face of cuts in budget by the state; and two, that the rationalisation of humanities disciplines into units teaching essential skills like “critical literacy” has come at the cost of upholding the “full apparatus of a humanistic education” grounded in the fields of philosophy, history, and philology (xiii-iv). Coetzee’s thoughts here, which mingle idealism and pessimism, chime with his protagonist JC’s in Diary of a Bad Year (2007), for instance in his opinion “On Universities,” as well as with Elizabeth Costello’s sister Blanche’s account of the history of the humanities, which she presents as a graduation speech to humanities students in Lesson 5, “The Humanities in Africa,” of Elizabeth Costello: Eight Lessons (2003). These two orations share with Coetzee’s verdict in the Foreword a bleak tone, and are rather high-minded and out of touch with practical social reality. However, in both novels these characters’ austere ideas are tempered by being placed in critical counterpoint (a key idea for Said, too) with, respectively, Costello’s memories of her dubious if affirming “acts of humanity” (sharing her body) with a terminally ill man in a hospice, and JC’s humbling interactions with his worldly secretary Anya. I thus prefer to read Coetzee’s Foreword as a text against whose idealism and pessimism Higgins counterpoints his own grounded arguments, which are exemplary in reflexively demonstrating why the skill and value of critical literacy, and in turn the study of the humanities, should be central to debates on the future of higher education in South Africa.