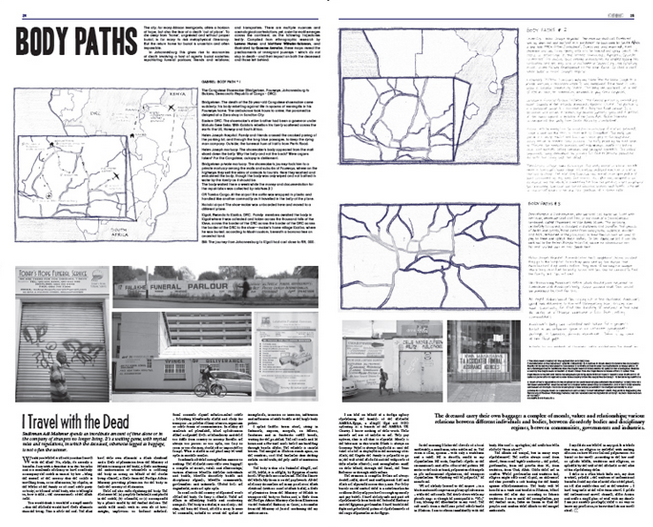 “We publish stories, not intentions.” Chimurenga’s founder, oga, Chronic editor-in-chief, Ntone Edjabe schooled me, as I nervously sounded out ideas last year for a written piece in progress (on liner notes). The words stuck, like a locked groove on a vinyl record, and remain on loop.

The importance of stories, of telling “our own” stories, has been a recurring trending topic in recent years. Regarding “African stories”, Chris Abani has spoken notably (See TED Talks 2007 and 2008), Binyavanga Wainaina too, and, of course, Chimamanda Ngozi Adichie.

So with storytelling in mind, let’s open the pages of the Chronic, “a quarterly pan African gazette”.

At the time of writing, three Chronics have been published: blue, green and red. Together they form an alternative three colours trilogy. A lithographic triptych, a tricolour; with each edition “asking new questions, or even the old ones anew.” Packed within the 48-page broadsheet and varying size/themed books review supplement are scores of stories presenting the everyday and the possibilities of what could be.

An imprint of Chimurenga (a Cape Town based non-profit organisation), the Chronic is a sibling publication to Chimurenga’s journal (or magazine), which, since 2002, has featured words and visuals which cross politics and arts cultures with wider social commentary. The sixteenth and most recent edition of the journal took the form of a vast broadsheet newspaper; a print embodiment of a time machine, published in 2011 but backdated to a week in 2008, to return focus to a notable spike in horrific xenophobic attacks throughout South Africa. The accolades that followed the publishing of the Chimurenga Chronic (Chimurenga #16), helped lead to the inception of a smaller, more frequent, and, ideally, sustainable edition: A new(s)paper.

Challenging a print format that is often regarded as throwaway, the Chronic shredsdreary newspaper conventions in both its content and design. It creates its own aesthetic parameters: partially with an emphasis on horizontality in the layout as well as recurring use of handwritten lettering (in addition to preset font types) and illustrations which also show a human side to production rather than overtly digital, machine-made, methods.

In a pocket-sized, screen-focussed age, the size of the print edition (620mm x 500mm when open) is at times inconvenient and fiddly, however, it is also instrumental in generating a breath-taking effect also experienced when holding a beautifully designed 12 by 12 inch record in your hands. A gatefold LP. This scale allows for counterpoint between micro and macro readings. Stories placed on the same page play with one another, feed off one another, to create stories with additional layers. New commentaries.

Take the interplay in the most recent (red-topped) edition, where Kwanele Sosibo’s respectful questioning of the EFF (complete with Donovan Ward’s red bereted illustrations) is spliced alongside a Q&A between hip-hop artists, Quintin “Jitsvinger” Goliath and Shaheen Ariefdien (Prophets of Da City). Who are the real truth-tellers? Politicians or MCs?

In the first quarterly edition of the Chronic, with its blue, almost-indigo, masthead, lies another jewel of a double-page spread. Here, handwritten personal narratives flank maps which track the homecoming of deceased African immigrants. Body paths in transit from Hillbrow to Bulawayo; from South Africa to DRC (via Kenya and Ruanda). On the same spread as this strikingly presented ethnographic research is a short series of photos of funeral service providers. A third dimension comes in a tale from Sudirman Adi Makmur titled “I Travel with the Dead”.

Is it fact, fiction; faction? Lines between real and imagined are blurred, tangled.

Personal stories provide a lens to look at wider issues. Yemisi Ogbe tracks the flow of finances as she presents a balanced in/outsider look at evangelical “Superstar Men of God” in Nigeria. Through seventeen concise stories of “Love and Learning Under the World Bank”, Stacy Hardy cuts up a narrative of the economies and ideologies of prominent academic institutions across the continent. By focusing on the individuals involved (including Mahmood Mamdani, Achille Mbembe and Sarah Nuttall) we’re drawn in to the soap operatic dramas of intellectual icons.

As Njabulo S.Ndebele’s classic novella The Cry of Winnie Mandela straddles fiction and fact, we learn about the societies we live in from the stories in the Chronic. Provocative and satirical, Youssef Rakha takes us to Tahir Square for a, er… naked lunch with Bill Burroughs. How better to reflect on the past few years’ revolutionary movements in Egypt?

Full-page illustrations (or photos) offer further analysis to read in myriad of ways. Screw clichés on how many words a picture conveys. Donovan Ward freezes the emotion of the music in his depiction of bass player Herbie Tsoali. Portraits by Roger Williams of Mama Chantal Biya and Dame Patience Jonathan beautify the First Ladies of Cameroon and Nigeria. The intense visionary imaginations of writers Mongo Beti and Kolo Laing are encapsulated in Sindiso Nyoni’s ink sketches. Through graphic stories we are also able to enter the African Union: an annotated architectural diagram reveals the inner workings and bureaucrazy of the (Chinese-built) AU headquarters in Addis Ababa.

Three editions in, we can see a number of recurring columns taking shape. Football commentary from Simon Kuper; Curry Chronicles by Rustum Kozain which linguistically tickle ribs and tastebuds; and the editorial page houses “A Brief History of…” with insights so far into the building of monuments, the contents of presidential libraries, and of the many ways shit has been thrown as an act of protest.

Providing critical commentary and long-form journalism in written or graphic stories, the Chronic trusts in the intelligence of the reader. It emphasises the importance of reading – of reading more carefully. Of imagination. Of printed matter in a digital age. Of the handmade. Of questioning. Of un/learning. The Chronic crosses boundaries, documents them and smashes them down all through the stories on show. To quote Chimurenga quoting Fela Kuti: who no know go know.