No place here for crypto-colonial, romantic garbage about Africa 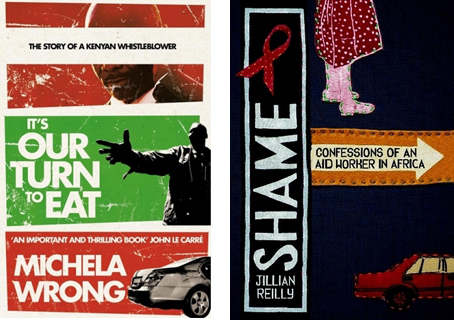 This session, chaired by UCT's Deborah Posel, united two apparently very different books. Michela Wrong’s It’s Our Turn to Eat: The Story of a Kenyan Whistleblower is about the reformer John Githongo’s appointment as Kenya’s anti-corruption czar, and about what happened next. Jillian Reilly’s Shame: Confessions of an Aid Worker in Africa is about her experiences as an aid worker in South Africa and Zimbabwe. The contrasts between the two books, and their authors, are multiple.

Wrong worked as a foreign correspondent in Africa for six years. She came to Africa, she said, because that’s where Reuters told her to go. Her three books, all non-fiction, are written in detached, journalistic mode. They have collected multiple accolades and awards. Shame, on the other hand, is Jillian Reilly’s first book. It is self-published. It is confessional, personal, a meditation on, as Reilly says, “growing up and growing old in Africa”.

The two seem poles apart, yet there are things that unite them. They are both written by white women, one British and one American. They are both thoughtful and careful. And they both talk a lot about money. The question of money, of how foreign aid complicates the position of the outsider, was raised over and over again in the discussion.

Reilly, working in Zimbabwe and South Africa at the centre of a “$30 billion AIDS industrial complex”, found herself repeatedly confounded by what it meant to be, as she said, “the white woman in charge of money”.

Wrong, having gone to Africa with no preconceptions about the ethics of aid, ended up feeling that the role of donors was enormously interfering and influential. She stressed that we need to stop being naïve and dishonest about why the West gives aid, and about the ways in which that money gets mislaid.

The West gives aid, she said, because it wants to be seen as helping. Her point is that for donors it’s more important to be seen to be giving aid than to be accountable for what actually happens to the money.

It was clear that both women were speaking from long experience, and that from their position as outsiders in Africa they had learned a few horrible truths about what money can do here.

As Posel remarked, both of these books are very honest. The discussion was similarly so. Both Wrong and Reilly were candid in their responses. They seemed constantly cognisant of their position as outsiders. As Wrong pointed out, the success of her books depended on her being an outsider, because of the access she got.

Reilly said that in her capacity as an aid worker, being an outsider gave her the authority to have a conversation. People sat expectantly, she said, because they knew that there was money attached. Both women spoke with complete pragmatism. No romantic garbage about vast African skies or the smell of the Highveld after a summer storm; no crypto-colonial stuff about the way the land and its noble people come to live in your heart.

Wrong spoke wittily, and disparagingly, about that old outsider’s idea, the one about how Africa gets under your skin, that it’s unlike anywhere else, and that you have to love it to work here. She argued that it was damaging because it contributes to the poisonous idea of African exceptionalism.

When she came to Africa, she said, it was just a job. Nothing more. You could see that the audience almost believed her. Almost, but not quite, because it was clear that both of these women, outsiders or not, care deeply about what happens here.

Posel opened the discussion with a question about what it means to be an outsider in Africa, what happens to the boundary between the inside and the outside, whether someone can ever cross from one to the other. It was never going to be satisfactorily answered – not in this or any other session. But at least these books are trying.