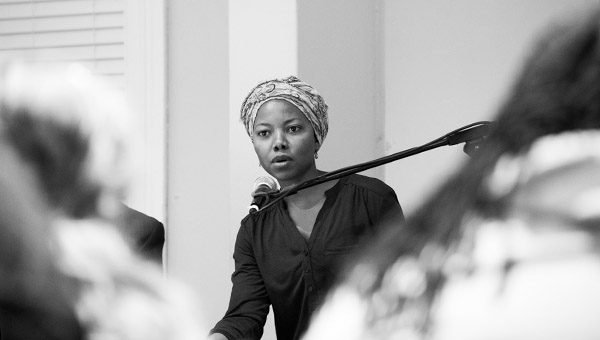 Not every writer sounds like one. In Strong Opinions, Nabokov said, “I think like a genius, I write like a distinguished author, I speak like a child,” and he seems to have thought this was a pretty great way to be. NoViolet Bulawayo, on the other hand, talks like a writer. She speaks in perfect soundbites, without seeming to try. She says, “a book is a country to which everyone has a Visa”, and “I just wrote the book because it had to be written”, and “we need new ways of imagining ourselves as people, as citizens of the world.” Even her name is a story. Born Elizabeth Tshele, she gave herself a new name to honour her past. NoViolet means “with Violet”, and is a tribute to her mother, who died when she was eighteen months old. Bulawayo, of course, is the city of her birth. She is a book festival audience’s dream.

In yesterday’s Open Book session chaired by UCT’s Derek Higginbotham, Bulawayo discussed her Man Booker shortlisted novel, We Need New Names. The novel is set in both Zimbabwe and America, and is narrated by Darling, who is ten when the novel begins. Darling’s voice is clear and unsentimental. She is a kid who sees things as they are. Through a child’s eyes, the trauma of Zimbabwe’s lost decade is relayed to the reader in unexpected ways. The book feels very necessary, without ever being hectoring or moralising or anxious. In 2013, lots of people are still flinging themselves around worrying over How To Write About Africa, but Bulawayo has overcome the difficulty with elegance.

She began the session with a reading. Darling, now living in Destroyedmichygen (Detroit, Michigan), is listening to her aunt try to place an order over the phone with Victoria’s Secret. It’s for an underwear set from the Angel Collection. The aunt, with her Zimbabwean accent, says it like “Un-jell”, and Darling stands in the background mouthing “AYN-JELL, AYN-JELL”. The person on the other end of the line doesn’t get it, and the aunt’s frustration mounts. They are all speaking English, she thinks, so what’s the problem? But Darling knows there are different kinds of Englishes, different ways of speaking them, and three hundred different ways that people can misunderstand each other. Darling listens and says, “I promise myself that I’ll never ever sound like that.” In this brief passage, some of the novel’s big ideas are laid out. What it means to be an immigrant, and speak with a different voice, and know always that you come from somewhere else.

Accents are obviously important to Bulawayo. She recounts an anecdote: someone once asked her why she doesn’t speak with an American accent, seeing as she’s lived there for ten years, more. She doesn’t have an American accent, she said, because she doesn’t want one. It was just an aside, a sort of jokey thing to say, but it feels like there was something important there. Wherever she lives, she is a Zimbabwean. She speaks like one and thinks like one, and that matters for how we read her book.

During the question session, a woman with an accent just like Bulawayo’s was the first to shoot up her hand. Her voice was actually trembling when she said that she started to read the novel last night at ten, and didn’t stop until four in the morning. She said that the novel was sophisticated, magnificent. She held the book in both hands and shook it and thanked Bulawayo: “People will read this, and they’ll understand.” It’s a burden, maybe, to have to explain one’s country to the world. Bulawayo carries the weight very lightly though. The audience asked all the predictable stuff you’re meant to ask at these things. “Why did you not write in the vernacular?” “How will Americans understand this book?” “How does it feel to be the first Zimbabwean nominated for the Booker?” She almost sidestepped these questions, answering them in ways that illuminate the importance of new names, new ways of thinking about these stories. She was light and serious at the same time, a quality that is very clear in her writing. Now that it’s been shortlisted for the Booker, this novel will reach an even wider audience. Answering a question put to her by Higginbotham, Bulawayo said that she imagined people reading the novel, and asking themselves what their name was, and what their new name might be. She said it was a Zimbabwean story, but that it was “everybody’s novel”. For those of us who worry over how to write about Africa, or read about it, Bulawayo’s example is inspiring.