It depends on who is looking 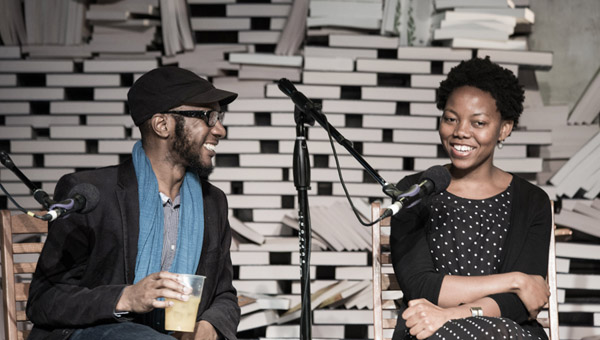 An event which promises to “explore the intersection of place and identity” does not necessarily sound all that promising. It carries the taint of the postgrad seminar. But it ended up being one of the highlights of the festival, I think. To begin with, all four of the speakers seemed to be in seriously good moods, sort of giddy with joy that this was their last event. Open Book was wonderful this year, like it always is. But as Mervyn Sloman, the festival’s organiser, pointed out, it’s also a lot of work, and the writers run themselves ragged, and they say yes to everything, and so it must be a relief when it’s over.

For these four writers, questions of place and identity are not abstractions. These questions seem always to hover in the air above them. As the session’s chair pointed out, all of them have biographies that require a deep inhalation of breath before launching into an explanation. All four of them currently live in America, but NoViolet Bulawayo was born in Zimbabwe, Mũkoma wa Ngũgĩ has spent much of his life in Kenya, Teju Cole in Nigeria, and Tope Folarin is the child of Nigerian immigrant parents. For all of them, the question “where are you from?” take a lot of answering. Bulawayo spoke eloquently about the challenges of America as a racialised space, and coming slowly to terms with the way she was seen, and what this meant for the way she saw herself. In another session, UCT’s Derrick Higginbotham described America as “the melting pot where nothing melts”, and it was interesting to see how all four writers touched on this idea. Ngũgĩ, for instance, discussed the ways in which identity changes according to “who is looking at us and where we are.” It’s different in America, and different again in Cape Town, or in Kenya. They spoke of “homes” rather than “home” and of “the wonderful advantages of making a self”.

Yewande Omotso, the chair, asked whether they ever felt in danger of becoming an “explainer” of their countries and families, and the way things are at home. Here is where it got really interesting. Folarin used the phrase “authenticity brigade”, and all four speakers commenced with a great shaking of heads and rolling of eyes. He was talking about those who say he’s “not black enough”, or not African enough, and those who ask who he thinks he is writing about Africa, or Africans. Teju Cole stepped in saying, “I give no one the right to be disappointed in me.” We live in a difficult world, he argued and there are “so many other things to worry about than whether or not you’re black enough.” This resulted in more nodding of heads, more fervent agreement. “We can’t,” he said, “get mired in bullshit like this.” Extra nodding. It has to be said here that everyone who listens to Teju Cole speak seems to fall a bit in love with him. That’s okay. We are only human, and there is only so much fight we can put up in the face of this kind of dense whispery charisma. He really is something else. We hope he will be back soon.

It seemed like a good way to end the festival. Four of the most interesting writers working today, sitting there grinning at each other and the audience. They represent the best aspects of a festival like Open Book. I can’t wait to see what they do next.