Novel ways to present the familiar

Perhaps sensing a need for crime writing to mirror Botswana’s socio-political landscape, the team of Michael Sears and Stanley Trollip emerged in 2008 under the penname Michael Stanley. Their inquiry into the relationships between the people of Botswana (particularly the Bushman), the land itself and its state-owned enterprises is the spine of their work, setting them apart from other authors.

Set in the dry Central Kalahari, A Carrion Death is a solid though over-long police procedural (close to 600 pages) that establishes Michael Stanley’s writing aesthetic: intricate, serpentine plotting, well-drawn, often sympathetic characters, and beautifully evoked landscapes, along with a forensic eye for detail.

A Carrion Death sees Assistant Superintendent David “Kubu” Bengu tasked with solving a murder at a wildlife camp. Kubu’s childhood friend, the Bushman Khumanego, showed him to “look beyond the obvious”, to “explore below the surface ... what no one else would see” (12). It is apt, then, that Michael Stanley’s extensive research reveals “a hard land” that “reluctantly gives up secret prizes” (11). 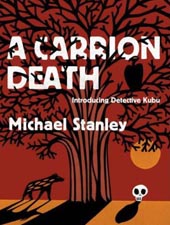 The novel attains a metafictional dimension as it asserts that an exploration geologist “needs to be a good detective”, who must follow “surface clues” to “try to determine the structure and nature of the rocks below” (126). The most self-reflexive scene in A Carrion Death accentuates indebtedness to the great mystery writers. After an employee uses a Company letter for blackmail, this exchange follows:

‘Did you ever read a story called “The Purloined Letter?’
‘Wasn’t that the one about the stolen letter that the thief hid in plain sight on a pinboard with a lot of other letters so that it would be ignored? But Sherlock Holmes saw through it at once? I think we had it in English literature at school.’
‘Not quite. It was Edgar Allen Poe actually, not Conan Doyle, and it was set in France in the nineteenth century. And the letter wasn’t hidden by placing it with a lot of other letters – the French police would have seen through that ruse; it was disguised. But it was disguised as itself. The thief disguised it as a letter, but a letter that no one would care about. An old, tatty letter’ (128).

Attentive readers will see the outline of the fictional project at play: to engage carefully with particular social concerns under the “disguise” of the conventional. The decision to include poachers, sangomas and corporate corruption into an already dense single narrative threatens to overwhelm the reader. However, these plot elements eventually connect smoothly; they concretise motifs of death and decay, fleshing out the novel’s title. By the end of A Carrion Death, the authors have proven themselves adept at writing about various criminal elements, while appreciative of the readerly investment in literary characters.

We move to the lush Linyanti forests in Northern Botswana for A Deadly Trade, a leaner murder-mystery with shades of Agatha Christie. After two murders at the Jackalberry camp in Botswana, close to the bordering Zambia and Zimbabwe, Kubu must question a host of uncooperative suspects to uncover the title’s “deadly trade”.

Throughout A Deadly Trade, details about Kubu’s fascination with puzzles emerge in response to the seemingly terminal nature of Botswana’s struggle with the HIV epidemic, with “more than two million people infected and one of the highest HIV infection rates in Africa” (112).

Kubu’s realisation that “puzzles don’t have to be physical things” links various clues after excavating the troubled history of Zimbabwean “freedom fighter” and beloved schoolteacher George “Goodluck” Tinubu, intimately connected to the past trauma of the owner of Jackalberry, Salome Mcglashan. Her almost fatal connection to Thinubu and other Zimbabwean “freedom fighters” before Zimbabwean independence takes the novel to an extended, emotional climax, where the authors show psychological acuity and tenderness.

Death of the Mantis is the third novel in the series – the shortest but most powerful – set in southwestern Botswana and around the Khalagadi Transfrontier National Park. Three interconnected murders, each with Bushman found standing over the victims, occur near “The Place”, a sacred ground for the Bushman. As Kubu examines his relationship with childhood friend Khumanego, this scenario ushers in a trenchant study of people and place, revolving around the conundrum: How does a nomadic people survive in a world with natural resources increasingly scarce, and land fenced by private ownership?

Driving the “thriller” element in Death of the Mantis is a rollicking desert adventure featuring Namibian Germans involved in a treasure hunt for the Namibian “mother lode”, “a flood of diamonds” that washed to the coast millions of years ago” in an area called the “Sperrgebiet – the forbidden area” (259). With its plot harking back to ground introduced in A Carrion Death, Death of the Mantis sees the authorial voice focalised through Khumanego. Desperate that his people avoid the same fate as other aboriginals “when the hyenas take their land” (23), there is genuine emotion and clarity in the way the authors shed light on the plight of the Bushman and their uncanny ability to see what remains undetected to the naked eye.

Kubu and Khumanego’s relationship takes centre stage, occasioned as the clash between modernity and tradition, the larger-then-life Kubu opposing Khumanego’s anachronistic presence. With the desert a “metaphor for the world” where “superficially everything was as you expected”, Khumanego feels that the Bushmen “must stand up for ourselves, or be swept away like sand” (46).

Death of the Mantis is certainly the most politically charged Michael Stanley novel, although the spirit world holds sway, and the sacred is celebrated above the profane. Death of the Mantis tracks stoic tribal elder Gobiwasi as he anticipates his own death. Gobiwasi consumes the desert plant Hoodia, settling “in the eland’s mind, tumbling, rolling as a tree in a rare flood” (109).

Passages such as the aforementioned offer a spiritual poetics of embodiment harking back to Umberto Eco’s The Name of the Rose. While it is almost inevitable that Kubu will bring the perpetrator in Death of the Mantis to justice, it becomes of secondary concern to the authors’ desire to illuminate a world seen mostly from afar.

Looking at the Michael Stanley works as a whole, foregrounding how “the arrow remains” in African societies, their most impressive feature is perhaps the characterisation of Detective Kubu, hippopotamus in Tswana. Since the hippo spends most of the day underwater, with only its eyes and ears sticking out, this speaks to the detective’s relaxed manner, yet hippos are deceptively powerful and territorial. They kill more people in Africa than any other animal, and so the convivial Kubu is relentlessly driven to rid Botswana of corruption and crime.

All three novels, particularly Death of the Mantis, ultimately carry a crossover appeal. One of Kubu’s great loves is the drink “steelworks” –  a tot of kola tonic, a dash of bitters, filled to the top with ginger beer. This mix of the breezy tonic, refreshing bitters and earthy ginger beer might be a fitting way to “bottle” and sell the series for what it is: familiar elements blended carefully into something novel and rewarding.