Mda in the Midwest 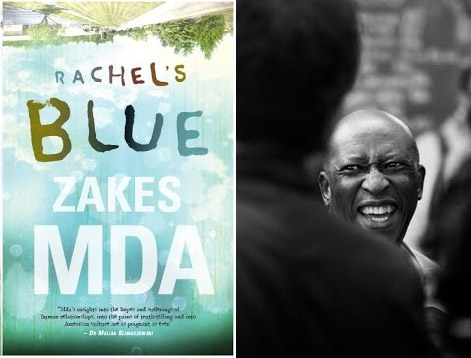 For the past decade or so, Zakes Mda has been working as a professor of creative writing at Ohio University. Rachel's Blue is the second of his novels to be set in the American Midwest, and the first to feature an all-American cast of characters. In it, Mda explores the life of a young rape victim as she struggles against both the oppressive mentality of her small-town community, and the harrowing implications of a legal situation in which the father of a rape-conceived child is allowed to sue for parenting rights.

Rachel Boucher, a busker and part-time anti-fracking activist in her early twenties, lives with her grandmother Nana Moira in a mobile home in Jensen Township, Athens County, Ohio. Rachel's dream is to play folk music at county fairs, just like her father and his father before him, and perhaps even to become a recording star one day. Nana Moira, who presides over a quilting circle and distributes food parcels at the Jensen Township community centre, wishes that Rachel would go to college instead. “This singing thing ain't working out; you been doing it for five years and it ain't taking you nowhere,” she says. Rachel insists that she is not a child anymore and runs off to anti-fracking demonstrations with her best friend Schuyler, of whose influence Nana Moira is deeply suspicous.

Into the midst of this standoff between Nana Moira's maternal concerns and Rachel's headstrong youth, two men appear: Skye Riley and Jason de Klerk. Jason has spent the last five years playing the didgeridoo in Yellow Springs, but now he has returned to Athens County and fallen obsessively in love with Rachel, who is an old high school crush. Jason volunteers at the community centre and impresses Nana Moira no end with his willingness to mop floors and run errands. Skye Riley is a young coal miner from West Virginia. He rides in on a motorcycle and galvanizes audiences at anti-fracking rallies with his impassioned calls for direct action against mining companies.

Soon, Rachel is seduced by Skye; she spends a steamy week in his motel room. But Skye is not a good boyfriend. His messages dry up; weeks later he arrives at the community centre and explains that he was in a mining accident. “He don't look nothing like a lot of man to me,” comments Nana Moira. “He's too skinny like his mama never fed him nothing when he was a baby.” Rachel roars off with Skye on his motorcycle. Jason looks on and broods. Some weeks later, at a Christmas party at the community centre, he inebriates himself with a homemade concoction of cough syrup and Mountain Dew. When it is late and all the other guests have left, the crime at the heart of the novel is perpetrated: Jason rapes Rachel.

Mda's writing style is beguiling, even affable. His appreciation for the subtleties of community interaction, and his storyteller's instinct for driving the plot forward, means that the sense of despair surrounding Rachel's situation creeps into the novel almost unobtrusively. When Jason's father, an organic-cheese-farmer-turned-Reformist-churchman named Genesis de Klerk, discovers that Rachel is pregnant, he approaches Nana Moira to negotiate for custody of the child. Nana Moira urges Rachel to give him an audience: “You can't be rude to no visitors, Rachel. You ain't gonna get biggety afore you hear what they wanna say to you.” Likewise, the reader is fully immersed in the court procuderal that makes up a substantial part of the novel before the realization strikes, with a mounting sense of dread, that the scales of the law are tipped heavily in favour of the De Klerks and their expensive lawyer. The seemingly effortless skill with which Mda weaves these constricting webs around his protagonist brings her plight to life in a thoroughly compelling manner.

Certain aspects of the novel are less convincing. It takes a few chapters for one's ear to adapt itself to the argot – a kind of poor white Americanese – in which Mda renders the speech of most of the characters in the story. Occasionally one has a sense that Mda could not resist the urge to crack a joke: when Rachel is on the point of giving birth to her rape-conceived baby, and the midwife shows up, Nana Moira pontificates about the time-honoured Boucher tradition of home delivery: “Just like folks raise organic food in these parts, the Bouchers have always raised organic babies,” she says. In the final chapters, a somewhat gratuitous skeleton pokes its head out of the family closet to play a significant part in the novel's resolution.

It would take a true pedant, however, to let these hiccups in the flow of the narrative discourage him or her from enjoying the story. Mda's obvious delight in writing his characters and their personal quirks in no way detracts from the gravity of the issues at stake in the novel. On the contrary, they give them a human face. One of the novel's strongest accomplishments is the ease with which Mda has transplanted his sensitivity to such issues – and to their human impact – from the more familiar South African setting of his earlier work to the apparently fertile grounds of the American Midwest.