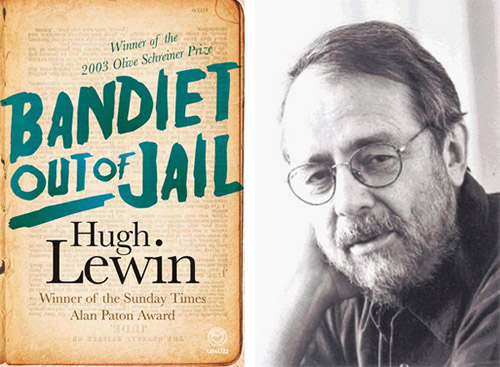 In 1964, when he was 24 years old, Hugh Lewin was sentenced to seven years in prison for his activities in the Armed Resistance Movement (ARM), a small group of anti-apartheid activists that planned and executed acts of sabotage against the apartheid state. On his release, Lewin published his prison memoir, Bandiet: Seven Years in a South African Prison in London. Random House and, more recently, Umuzi, have subsequently reissued the original text, supplemented by a range of appendices, as Bandiet out of Jail. Bandiet is one of a small handful of apartheid-era prison memoirs that is still being reprinted: the most recent Umuzi 2013 reprint possibly capitalising on the success of Lewin’s Stones against the Mirror, published to well-deserved critical acclaim a couple of years ago. It is worth asking why Lewin’s book survived its moment. What makes it “a classic of South African prison writing,” as the blurb claims?

For me, one clue lies in the short reflection, titled “Going Back Inside”, appended to the new edition. Here Lewin recounts visiting Pretoria Central in 2002. He describes walking down the empty corridor past the inmates who are locked in their cells. “All strangely silent. But the eyes! At each door, screaming through the judases, there were eyes peering out at us as we passed, staring, taunting, shouting into silence.” (248) Thirty years after his incarceration, well into the post-apartheid democratic era, the prison retains its capacity to fix him under its gaze, to evoke the reality of the people that are subjected to its dreary and dehumanising logic. Bandiet was in a sense only incidentally written as an anti-apartheid activist’s memoir. Its power lies in its remarkable ability to describe what life in prison feels like, what it does to ordinary human beings, and how it sustains and reproduces fundamentally corrupt relationships between people.

During the last years of the apartheid regime, prisons emptied of political prisoners, but the prisons certainly did not disappear. The removal of apartheid legislation and the dismantling of group areas did not make a dent in South Africa’s prison population, which is the highest in Africa and the ninth highest in the world. Prisons remain central to our social reality even as they recede from public scrutiny and appear to shift outside the ambit of “the political”. For Lewin, prisons are in fact always political; they subtend, reflect and produce the societies that house them. His description of prison in Bandiet retains its relevance today.

Lewin draws attention to the startling difference between middle-class white suburban life in South Africa in the 1960s and the radically different world of the prison, almost unimaginable from the outside. Indeed, the idea of prison seemed so remote to Lewin that even when news broke that the security police were arresting the members of the resistance movement that he belonged to, and his comrades started urgent preparations to flee the country, Lewin was overcome by a form of paralysis: he returned to work in the morning, half unconvinced that his normal day-to-day life could be so abruptly and absolutely terminated.

White South Africans were so far removed from the brutal and systematic coercive apparatuses that sustained their privilege that even political activists – fully aware of the injustices of the apartheid state, and cognisant of the fact that they were committing political crimes that carried severe sentences – could not accommodate or comprehend the reality of detention and imprisonment. “I never thought that I would go to jail,” Lewin remarks.

I was white, living in the nice easy white society, and even when I started to do most un-white sort of things, like blowing up pylons, it was possible to slip back into the white suburban ways which provided a useful screen against detection – and a screen against unwholesome reality.” (16)

Bandiet describes the collapse of this imaginary screen associated with whiteness under apartheid. Provocatively, Lewin portrays his encounter with prison in terms of becoming black:

It was only as a prisoner – a bandiet in a South African jail – that I could begin to realize what life is like for most South Africans. I am white. I had to go inside to know what it’s like to be black.” (16)

Here, Lewin draws attention to the way in which the experience of prison is ontological. A prison is not merely a place, an obstacle to overcome, or a thing to survive: a prison is an apparatus that changes who you are in a very particular way. It is precisely in this respect that the memoir transcends its historical moment and becomes a record of becoming other, a carefully detailed, disturbing and fascinating map of the way the prison internalises itself.

Along the way, Lewin shows how the way power worked in prison echoed and supported the operation of the apartheid state: time acquires a repetitive, circular quality, life is subsumed by routine, petty injunctions and meaningless rules, and the culture of snitching creates a paranoid, claustrophobic social space. Lewin sees Pretoria Central as a mirror of the world outside: “a rotten regime, devoid of moral justification, maintaining control through deceit and double-dealing, and, in the process, befouling everyone.” (144)

In one of the book’s most striking images, Lewin enters the Hall in Pretoria Central for the first time. He is greeted by a scene of bustling everyday activity: warders opening grille-gates to escort people across the Hall, cleaners polishing the floor and dusting, and so on. The sound of the condemned prisoners singing and chanting in the hanging cells fills the space, but everybody in the Hall simply ignores the unearthly sound: “None of them seemed to hear the singing and the chanting. They seemed oblivious, busily threading an invisible web of indifference within the head of the spider.” (92) It is difficult to imagine a more perfect representation of life under apartheid: the menial business of ordinary life conducted under and indifferent to the constant spectral presence of state-orchestrated violence and death.

Bandiet retains its force by showing how it becomes possible to ignore the singing of the condemned; how prison forces one to think like a criminal; how time is experienced when space becomes restricted; how small rules accumulate to constitute a form of tyranny; and what it feels like, in intimate detail, to lose certain freedoms. In some ways it echoes the anecdotal, episodic form of Herman Charles Bosman’s Cold Stone Jug, a classic South African prison memoir, to which Lewin makes explicit reference: Bosman was also incarcerated at Pretoria Central. These two books read well next to one another. It is also fascinating to read Bandiet alongside Stones Against the Mirror, Lewin’s reappraisal, published in 2011, of the events that led to his imprisonment and the aftermath.

Bandiet deserves its place in the global canon of prison writing. It is an understated, elegant and honest memoir that resists self-pity and self-glamorisation, and shows in careful detail what it feels like to drop out of one reality and to enter a completely different world. Its indictment of apartheid, the prison system and capital punishment flows from its close descriptions day to day life in Pretoria Central: there is nothing discursive or declamatory about its politics, and it remains a vivid, important book today.