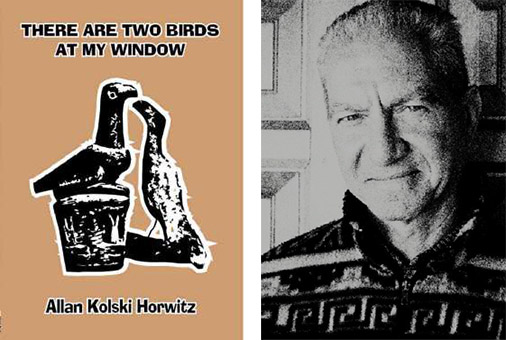 There are Two Birds at my Window by Allan Kolski Horwitz, Dye Hard Press, Johannesburg, 2012.

When you scan the title of this volume, you make an important discovery: the personal pronoun is unstressed, and that is the key to appreciating a remarkable poet. The stressed parts are the two birds and the window. The birds symbolise the world and the soul; the window is the threshold, the veil, where art and nature merge. Horwitz is a poet of what Keats called “gusto”, that is a recognition of the necessity of opposites, as binaries (the world) and as paradoxes (the soul).

The first poem, “Mzansi, my Beginning – Mzansi, my End”, alludes to Allen Ginsberg – another Jewish poet a long way from his spiritual home in the desert where you lose yourself to find yourself. It is a lacerating insight into the foibles of South African society as well as a declaration of love for and commitment to the “rainbow” nation. I put “rainbow” in inverted commas because Horwitz’s spectrum is reflected off oil stains on tarred roads and cracked window panes. What I particularly love about this poem is its demotic English:

When I think of my pedantic school teacher persona correcting my pupils if they say “with regards to” instead of “with regard to”; or “please may you” instead of “please will you”; or “by all means” instead of “by every means”, this poem reminds me that language is in flux, that usage determines grammar.

The above quotation also gives you an idea of the ambivalence in Horwitz’s attitude to the country of his birth. The poem has an antithetical structure: what he still dislikes about his country; what he continues to love about his country:

I doubt if there are “a million Trotskyites” in South Africa, but this poem is worthy of them as it is of all South Africans who are genuinely concerned about the shocking disparity between the haves and the have-nots.

The poem refers specifically to Ginsberg’s “America”, and what makes them different is more interesting than what makes them similar. In Ginsberg's poem, the egotistical “I” is strongly present. Horwitz, as I have already pointed out, almost never – outside his love poems – stresses the personal pronoun. Another difference is that Ginsberg’s attempt at ironical humour, his self-mockery (“When can I go to the supermarket and buy what I need with my good looks?”), doesn’t quite work for me, but Horwitz frequently makes me grin:

Ginsberg isn’t the only Jew that Horwitz commemorates. There is the holocaust survivor, Roman Frister, the film producer, Woody Allen, the father of psychoanalysis, Sigmund Freud, the great late romantic composer, Gustav Mahler and, possibly, the Nobel prize-winning poet, Pablo Neruda. The poet’s Jewish heritage gives the book the texture of a palimpsest, with his Jewish narrative as the subtext, most of it partly erased but emerging strongly in places, for example, “Mount Zion”, the Biblical City of David. This poem tells the story of how a Nazi officer forced a Jewish prisoner, a tailor, to sew a shirt for him from parchment: desecrated scrolls of the Torah. But the tailor gets a kind of revenge:

The Nazi wears the shirt at a fancy dress party to honour Hitler, unaware that he has been dressed in “abject surrender”. The terrible beauty of this poem is the way it presents past, present and future as a continuum:

It is in the Jewish subtext, it seems to me, that we find the bird of the soul, the brown wooden bird that looks a bit like a hornbill – only a bit:

One of the most soulful poems in the collection is “Dead Sea Vibration” where the poet is lifted:

The vexed question, what is poetic form, comes now to mind. To my classes of secondary school children I distinguish it from content. This is a necessary simplification, since form, in the Aristotelian sense, can also be defined as essence. Some academics distinguish between fixed form and organic form; some conflate form with voice, others with style. So I’ll put it in inverted commas. There is an almost infinite variety of “forms” in these poems. Consider this, for example:

He cannot move
He sits in his house and cobwebs grow thick
The grass grows thick
His lips stiffen with disuse
His hands lie fixed at his sides
He cannot move in the hole
[“Death and Reality”]
I am reminded of Ladybird Books, reading level 2, for example:
The old man plants the seeds
He waters the seeds
The turnip seeds grow
One turnip grows
and
Grows
and
Grows
The old man says
I want some turnip
For dinner
[“The Enormous Turnip”]

The child’s “form” is transposed and trans[“form”]ed by Horwitz. It is the verbal equivalent of Roy Lichtenstein making paintings out of comic book pictures. We could call it Tot Art or Totism!

Horwitz writes a lot more about other people than himself. Notable South Africans include Chris Hani, Steve Biko, Abdullah Ibrahim, and Ingrid Jonker. The poem about Jonker is one of my favourites. It is angry, confused, loving, and deeply sincere, the sincerest elegy that I have read or listened to, for South Africa’s most famous Afrikaans poet. It is entitled “White Horses Flecking Ingrid” (notice the brutal onomatopoeic suggestion) and it reminds us that she has been abused – by men – as much in death as in life.

In his blog, Aryan Kaganof, with the novel in mind, says: “i haven’t yet read a white writer adequate to the task of appropriating the trope of manners to the real situation we live in. this would require an heroic feat of self-(de)construction and i doubt any of us yet have those tools.” Well, I don’t know if Allan Horwitz has written any novels, but I declare that his poetry is adequate to that task. His “form” is guided by the two birds at his window, one of wood, one of stone:

Notice: the personal pronoun is unstressed. To paraphrase the great Persian poet, Rumi, Horwitz’s persona has disentangled himself from his selfish self. This has freed him to write about the wretched of the earth with compassion, and the Brett Kebbles of the earth with a mingling of disgust and pity:

Occasionally he can be vicious, like his characterisation of a supermodel who “wears a pout as long as her legs”, but his viciousness is nearly always mitigated by humour, as in “Comrades in Arms” and “Naming”: “a zero grade dictator gets a country”. Horwitz is never dogmatic, never self-righteous; but he has a strong sense of right and wrong, which is governed by the socialist ideal of material equality for all people. Jesus would approve.

He doesn’t have kind words for heartless bureaucracy. When I started reading “Red Ants” (there is a typo in the fifth stanza, “pour” should be “pore”), I thought the poem would be about soldiers:

But it turns out that they are local government officials:

and while they work the red ants sing:
pay your rent! pay your lights!
pay everything and we will disappear into the walls

And the bitter ending of “Census”:

What about his love poetry? Here the ego is necessarily quite strongly present, though when he uses the “I” it is usually lower case; or he writes in the third person; or he directs most of the attention to the “you”:

In general I find the love poetry less absorbing than the social and spiritual poetry. I start looking around for the birds!

Instances where a word or an image haven’t worked for me are very rare. I’ll give just one example. In the poem “Ocean Mother”, the second use of “just”, and the description of sea’s breasts as “wavy”. It makes me think, incongruously, of tassel tossers.

As volumes of poetry go, this is very long, 155 pages, every page a gem. I believe that poetry reviews should always print at least one poem in full so that the reader can get the total experience. So to end, here is one of my favourite poems by this “non-white white” poet. You need light to cast a shadow!

shadows of branches
how they dance
splinter
a white curtain

shows itself
branch on white

dancing yellowy light
before between and past midnight